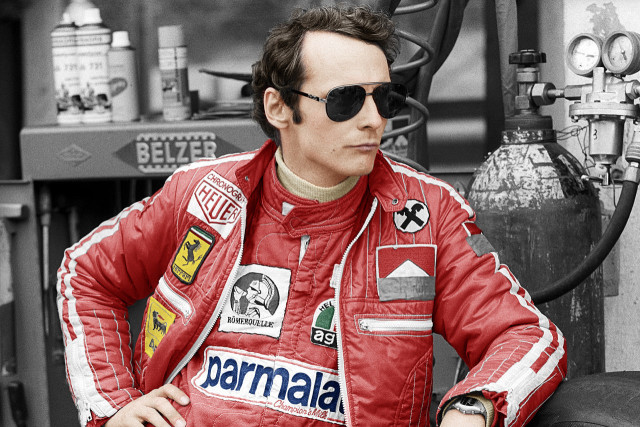 Niki Lauda’s a familiar name with racing fans these days due to his unmistakably direct, confident appraisal or condemnation of race events with Nico and Lewis. Really, this self-assured means of delivering opinions is only the tip of the iceberg. Lauda’s always been a self-absorbed person, and his ability at the wheel during his heyday matched his ability to organize a team, refine the car, and cultivate a sense of duty and hope. There have been charismatic drivers in the world of motorsport, but few with the odd combination of intelligence, perseverance, and presence that the world’s first modern professional has.

Lauda was never Mr. Charisma. Buck-toothed, gangly, studious, and reserved, he lacked that larger-than-life appeal that the rockstar drivers of the seventies often possessed. Sized up against someone like James Hunt, Lauda looked positively dorkish. However, Lauda had brains, and he knew it and employed his loaf to surmount the numerous business hurdles en route to a full-time seat.

Marking his first step into Formula One, Lauda took out a life insurance policy to secure a loan and reduced the interest rate through advertising the bank on his March F1 car. This buy-in, complex as it was, suggested that not only was Lauda ambitious but had the business acumen needed to understand how to bring money into the picture. His drive in March was a total flop, but he managed to use this as a stepping stone to British Racing Motors.
By cleverly delaying payment, Lauda bided his time well and showed his team, BRM, that he could drive by placing fifth at the 1973 Belgian Grand Prix, as well as performing at the Monaco Grand Prix that year, albeit not finishing. With his ability on full display, he managed to get hired as a proper, paid driver, and his numerous loans that kept him up at night were beginning to dissolve. Lauda was on his way.

So if business acumen and a decent handle of the car got his foot in the door, what propelled his career forward was his technical understanding of the racing car itself. Lauda, the type to fuss over minute details in setup and establish a decent baseline while other drivers were lounging around the pool, understood that having a car work for you will endear yourself to mechanics and engineers, improve your chances over the long run, and reduce risks dramatically.

His understanding of the nuts and bolts of racing garnered him a reputation, and when his former-BRM teammate, Clay Regazzoni, moved to Ferrari in 1974, his praise for Lauda’s setup skills was heard by Luca Di Montezemolo. After joining the Prancing Horse, that confidence in his own technical understanding came to benefit Lauda, who was not scared of criticizing the car in front of Mr. Ferrari – a man who carried a Godfather-like weight in the world of F1.
Ferrari threatened Lauda with a sacking if his criticisms did not amount to improved pace, but Lauda, ever self-assured, delivered even more than he had proposed. From then on, Mr. Ferrari respected the Austrian’s ability to improve a racing car, and he had won the respect of the illustrious team, who were willing to meet his lofty standards. As smart and as motivational as the man was, there was more to the package.

Equally valuable was his sense of fortitude. A horrifying crash at the Nurburgring in 1976 has made him into a living legend – a phoenix rising from a flame, but he nearly died. After ingesting toxic fumes and burning half his face off, the man fought for his life in the hospital, focusing his attention on whatever stimuli to stay awake and fend off the lulling draw of death. Lauda’s lungs were scraped clean on a regular basis during his hospital stay, and his indomitable will allowed him to endure the agony. Despite being at death’s door, the young Austrian was thinking of returning to work. After only missing three races, he was back in the cockpit, with a specialized helmet to fit the blood-soaked bandages still wrapped around his head.

However, that was no easy prospect. The fear was crippling, but Lauda managed to cut off all forms of pressure, minimizing the information hurled at him that miraculous weekend at Monza in 1976, to acclimate slowly, bringing himself up to pace after a harrowing experience. While his fear was incapacitating at first, Lauda managed to bring home fourth that weekend, shocking the crowds and winning himself a legion of fans for life.

His mathematical approach to racing served him well, but left him jaded towards the end of the 1979 season, where he was reported to have grown tired of “driving around in circles.” Retiring to start his own airline, Lauda eventually returned to F1 in 1982, this time with McLaren. A political animal, went behind the backs of Ron Dennis and John Barnard to Marlboro, the team’s main sponsor, to begin early development of their 1984 car. Fitted with a temperamental Porsche-TAG turbo motor, Lauda knew that to be competitive come ’84, all the kinks would have to be ironed out in the final races of the ’83 season.

With his most talented teammate ever in Alain Prost and Lauda pushing 35, the odds were stacked against him for the ’84 season. Nevertheless, his ability to refine the car and a wiliness gained with experience allowed Lauda to make a consistent attack at the championship. Knowing full-well he couldn’t match the young Frenchman’s blinding speed in qualifying, Lauda focused on race setup, biding his time during the race and often mounting a charge later on, when others had destroyed their tires, gearboxes or engines. Lauda’s smooth touch kept him in contention, despite Prost having an unmistakable advantage in pace.

His cerebral approach saw him to the championship ahead of Prost by half a point that year. Prost, always a thoughtful driver, changed his approach to racing after that tense finale in Portugal, and from then on became sport’s best risk assessors. By learning a trick or two from the crafty old Austrian, Prost became, effectively, the new “Computer Brain.” Calm, cool, smooth, clever, and very efficient, Prost mimicked all that made the great Austrian so successful and learned that speed is only one piece of the puzzle. Lauda showed the world that an understanding of the car, an infectious self-belief, and an unrepentant will to win would trump sheer guts.