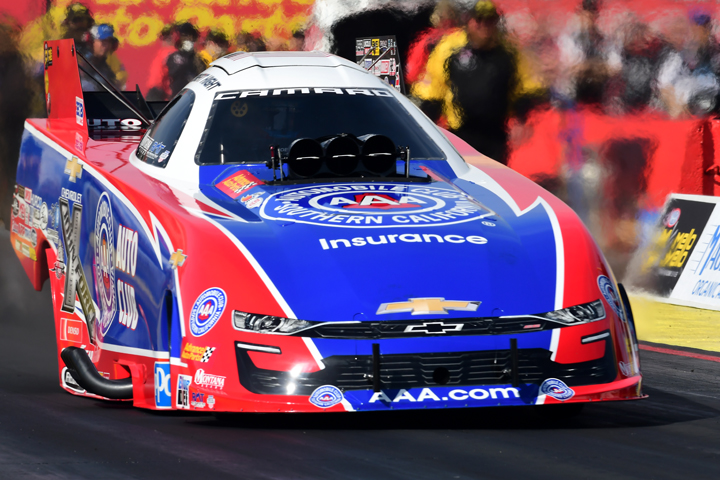 NHRA’s 2019 “regular season” schedule is nearing its one-third point, which it will reach in a couple of weeks with NHRA’s second four-wide contest, this time racing the NGK Spark Plugs Four-Wide nationals at zMAX Dragway outside Charlotte, NC. This coming weekend, following last week’s DENSO Spark Plugs Four-Wide Nationals on The Strip at Las Vegas Motor Speedway, the tour travels to Houston for its MOPAR Express Lane SpringNationals presented by Pennzoil at Houston Raceway Park.

This weekend marks the first race of the 2019 where neither Pro Stock nor Pro Stock Motorcycle is on the docket. Rather, NHRA welcomes the E3 Spark Plugs Pro Mod category which, in its second race of the year, is over-subscribed with a huge 27-car entry list. Both Top Fuel and Funny Car, too, have more than the traditional 16-car fields, with each touting a 17-car entry list. The tour will be met by 80-degree temps, typical Houston mugginess and, most likely, thunderstorms on Saturday. 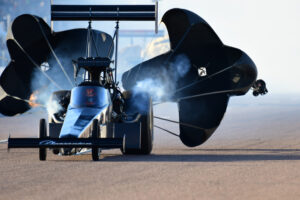 Last year’s race marked 2017 Top Fuel champion Brittany Force’s sole win-light in 2018 and the John Force Racing dragster driver returns to this site with momentum on her side, having finished as runner-up to first-time victor Mike Salinas, now in his second full season of NHRA Mell Yello Drag Racing Series competition, during the four-wide race in Sin City. Force has qualified well thus far in the season under the supervision of former driver David Grubnic and her new crew.

“I’m very happy for this Advance Auto Parts team,” she said. “Coming into the season we’ve had big changes with a new team, new crew chiefs David Grubnic and Mac Savage, and a new group of guys. It takes a while until you figure out your routine and you find you stride,” Force acknowledged.

Force moved from 11th to eighth in the points standings with her second-place result in the always tough four-across drag race, but Salinas vaulted from seventh to second, trailing only Pomona victor Doug Kalitta 319-286 points. Kalitta will run Toyota sponsorship at Houston, his team said. Salinas, who added the horsepower of tuning consultant Alan Johnson and crew chief Brian Husen in the off-season, was the No. 1 qualifier at Las Vegas and realized it might take time before he and his newly-reformulated team found their stride. 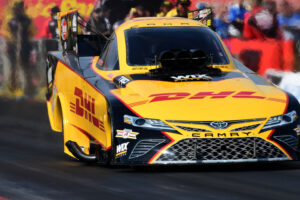 “It means a lot,” the central coast California resident said. “I have this program that I put in my head and I believed it would work. Alan Johnson (coming aboard as tuner) has been five years in the making. didn’t say much, just let everything fall where it’s going to fall. We built something and now we can go racing.”

What’s most important to Salinas is the family aspect of drag racing, as his four daughters enter the sport. “I set the bar for my family all the time and now we have a good bar for them to reach and meet from the [Pro Stock] motorcycle, to the A-Fuel, to our Pro Mod [car] coming, to everything we’re going to do. It’s going to be a great thing.”

Both of these drivers will have to contend with reigning world champion Steve Torrence, the Texan regaining his form and coming into this fifth race of the year holding third-place points. The Houston Top Fuel 17-dragster entry list includes a second race for Jordan Vandergriff of Bob Vandergriff Racing (BVR), along with the return of Texans Kebin Kinsley and Billy Torrence, the latter a winner at Phoenix this past February. Shawn Reed makes his 2019 debut at the helm of a second BVR Top Fuel entry.

Eight-time Top Fuel champion Tony Schumacher remains on the sidelines as his Don Schumacher Racing team continues to search for the right partnership. Schumacher’s absence has created a hole in the dragster contingent; he’s said all along he doesn’t want to take on a sponsor without the type of engagement Schumacher had with the U.S. Army. While 2018 runner-up Schumacher is out of a car, Doug Kalitta leads the points, followed by Salinas, Torrence, Leah Pritchett, Richie Crampton, tied Clay Millican and Billy Torrence, Brittany Force, Terry McMillen and Antron Brown. 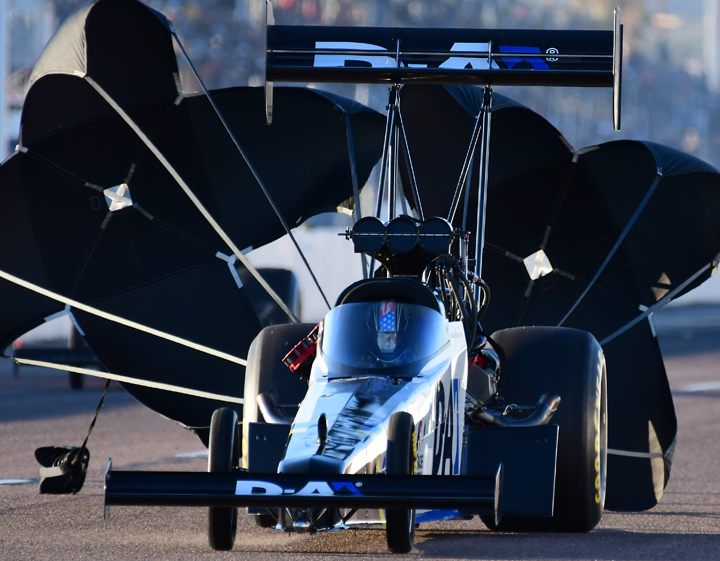 Todd was the winner in Sin City, his third consecutive victory at the dragstrip that’s next door to Nellis Air Force Base. He’s also the defending victor of the Houston race, giving the former dragster driver a good deal of momentum heading to Texas this weekend. Todd didn’t really show his dominance at the Vegas Four-Wide competition until it counted, in the final round. In both preambles he finished runner-up to Wilkerson’s Ford Shelby Mustang, and reversed those finishes to claim victory in the finals.

After challenges early in this season, the Kalitta Motorsports driver has found his stride, it appears. “We struggled with cold tracks and shaking the tires,” Todd said. “I knew that it was eventually going to warm up and sure enough, it was hot and nasty” at Las Vegas. That doesn’t bode well for his 16 Houston competitors, including Wilkerson, who recorded his second straight finals appearance after being runner-up at the 50th annual Amalie Motor Oil Gatornationals in mid-March. 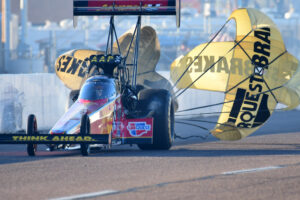 Currently holding seventh-place points, Wilkerson will soon have the new Ford Mustang body initially in use by Bob Tasca III; he’s also prepping a special, 40th anniversary Levi, Ray and Shoup (LRS) body design. “We’re real excited about that new [Funny Car] body, because if it’s as good as the one we have now, we’re going to be really happy. We’re hearing it’s better, so that’s pretty cool.”

Rejoining the Funny Car wars this weekend are Blake Alexander and Todd Simpson, the former driving a 2017 Ford Mustang and the latter in a 2016 Toyota Camry. The “Surfer”, Jeff Diehl won’t be making the trek halfway across the country from his central California home despite a great result in Las Vegas where he was runner-up in the first round of four-wide competition, one of his better showings in recent history.

And then there’s John Force, still battling for his 150th career Funny Car victory after achieving No. 149 in Denver last July. The drought is always tough to take for such a fierce competitor as Chevy Camaro racer Force, but as the veteran adapts to ongoing changes in his “brain trust” and the ancillary issues of keeping Hight in the points lead, Brittany Force engaged to get back-to-back Houston wins and helping new hire Austin Prock find his sea legs in a Top Fuel dragster. At Las Vegas, “I wasn’t where I needed to be but I know how to get there,” Force said.

The action at Houston should be wild as ever, as the tour reverts to its traditional two-wide racing for at least this weekend. It’s always hard to predict winners in any NHRA contest and this one is no different: we’ll just have to wait and watch.