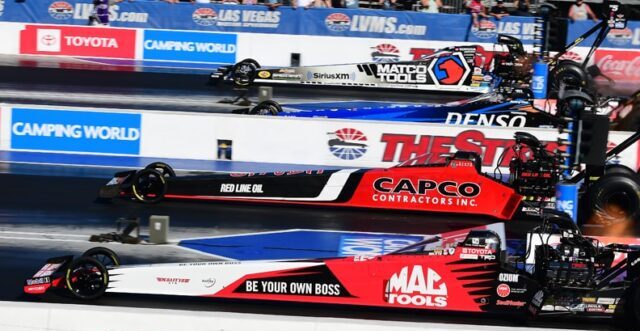 After a month-long hiatus between the season-starting NHRA Camping World Drag Racing Series race and its second salvo, the schedule is morphing into a more familiar cadence, as teams have two weeks between last weekend’s DENSO Spark Plugs NHRA Four-Wide Nationals and NHRA’s final visit to Atlanta Dragway in Commerce, GA for the Lucas Oil NHRA Southern Nationals.

Last week’s DENSO Four-Wide Nationals on The Strip at Las Vegas Motor Speedway answered quite a few questions and posed even more. The winners were somewhat familiar in some classes, less so in others. Steve Torrence nabbed victory in Top Fuel, just a single day after his birthday and on his mother, Kay’s birthday. He qualified second behind Brittany Force and went on to win both of his quads before claiming victory over Doug Kalitta, Clay Millican and Antron Brown in the finals, all but Brown winners of their initial quads. 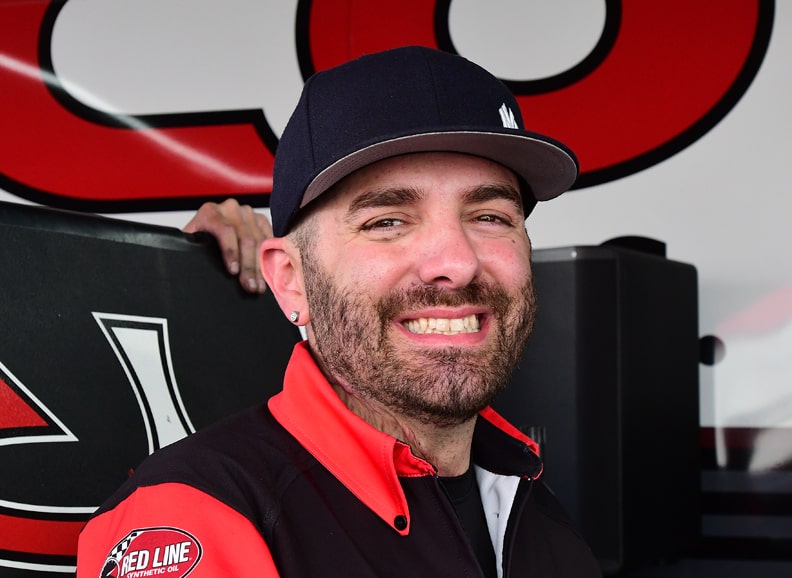 This latest victory was achieved with injured crewman Dom Lagana on-site (for the second time in 2021) and standing at the line with every other Torrence Racing crew member. The win gives Torrence 35 points over Shawn Langdon, who won in Gainesville, while Brown is 39 points behind, Kalitta lags by 56 points and Billy Torrence is 66 points behind his son. 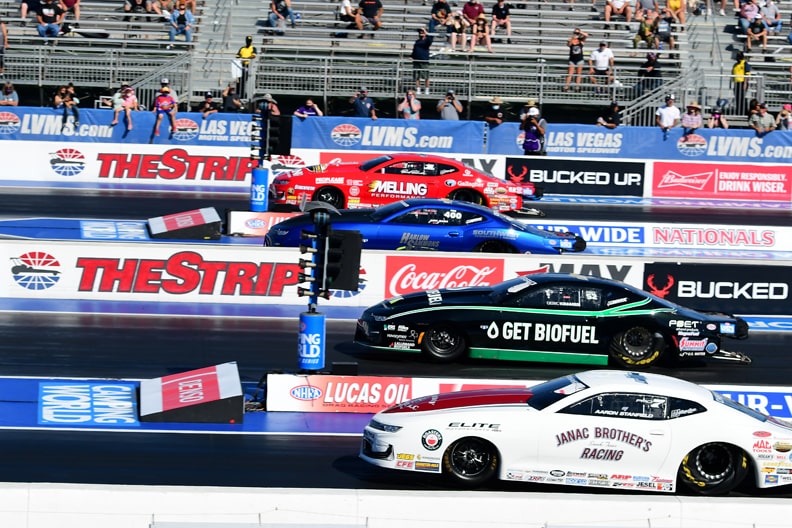 Erica Enders recovered from three lackluster qualifying sessions – she qualified 13th – and two runner-up results in her first two pair of quads to earn her 30th career victory in her 300th Pro Stock start. Her second quad runner-up was earned on a hole shot and her final round victory against No. 1 qualifier and teammate Aaron Stanfield, Deric Kramer and second-generation racer Mason McGaha, made Enders the first NHRA drag racer to win a four-wide race from the bottom half of the field.

Greg Anderson, who won in Gainesville, retains the Pro Stock points lead but Enders is only 33 back, while Deric Kramer holds third place points (-38), Mason McGaha is fourth (-43) and Troy Coughlin Jr., the Gainesville runner-up is in fifth place, 60 points behind Anderson. 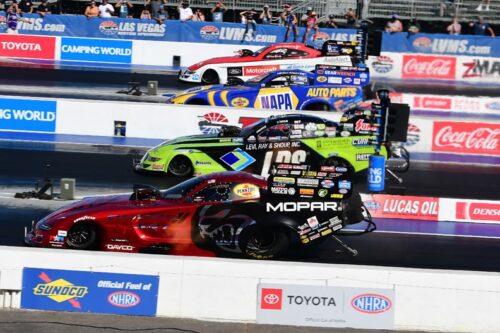 Tasca left Las Vegas as the No. 1 driver in Funny Car, 21 points ahead of Gainesville winner J.R. Todd and the DHL Toyota Camry. This duo is followed by Gainesville runner-up Robert Hight (-35) in the Auto Club Chevrolet Camaro SS, Ron Capps’ Dodge Charger SRT Hellcat (-48) and Tim Wilkerson in fifth place with a lag of 58 points to his fellow Mustang racer.

Ryan Oehler earned his second race-winner’s Wally trophy in Las Vegas despite an engine change on his EBR between first and second quads. He was runner-up in both races leading up to the finals, where the Illinois-based EBR rider ran away from the Suzuki of Cory Reed, Steve Johnson’s Suzuki and Scotty Pollacheck’s EBR. Pollacheck was credited with fourth place because he fouled at the starting line, even as Johnson’s busted Suzuki earned third place in the finals despite failing to completer the quarter-mile run. 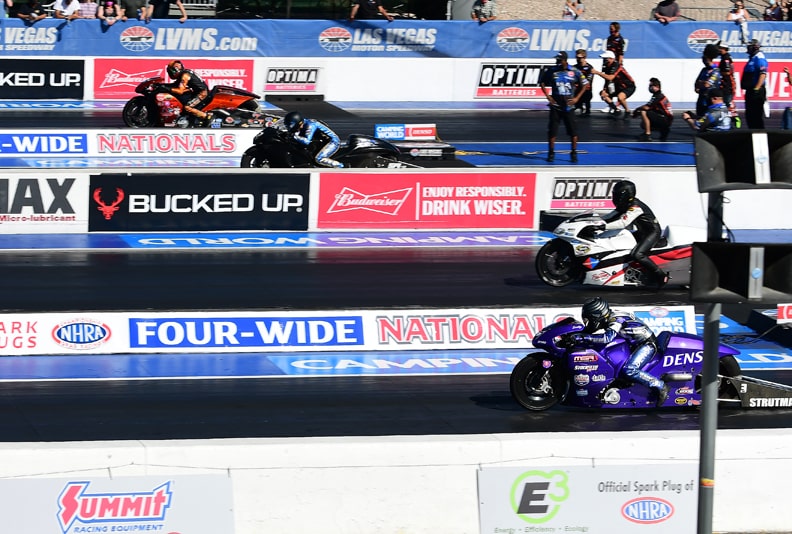 The final result gave Oehler the point lead – which is what he had after his first race win last year at the Pro Stock Motorcycle season-starter on Indianapolis’ Lucas Oil Raceway dragstrip. Oehler has 26 points in hand over reigning champion Matt Smith (Smith won the Gatornationals; Oehler was runner-up), while Johnson holds third (-57), Pollacheck is a single point behind Johnson and Angelle Sampey’s Vance & Hines Suzuki (-85) rounds out the top five in this class, which had only 14 riders on-site in Las Vegas.

The Las Vegas race was this photojournalist’s first time working a four-wide NHRA event. It took a bit of adjustment getting used to seeing the results for four racers on the scoreboard after each run and it was strange being finished so early on both Friday and Saturday. The fans at Las Vegas were joyful to be on-site and, for the most part, paid attention to the masking rules, as did competitors. It was great seeing Dom Lagana on-site again and wanting so badly to be working – he’s on his way!

Aside from the finals, which I photographed from the stands – after asking paying customers if I was in their way – it felt like a “normal” drag race, because of the divisions between the always-used double lanes and the lanes used strictly for this race. The No. 3 and No. 4 lanes were pretty junky on Friday and Saturday but came to life admirably on Sunday – three of four Camping World race champs earned their Wally trophies from the No. 4 lane. Apparently Steve Torrence can win from anywhere on this – and seemingly most – race weekends.