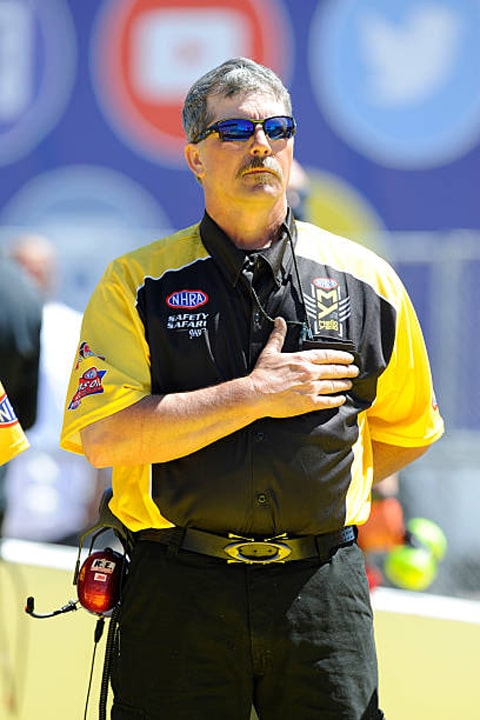 Now it appears NHRA has decided it doesn’t need a chief starter any longer and will, instead, enlist regional and divisional starters at all of its 24 National events on the 2019 Mello Yello schedule. A prepared statement said, “NHRA is going a new direction regarding the structure and role of the starter position.”

While fans of the sport might have seen Gittings and his predecessors just standing between two racers as they arrive at the Christmas Tree starting line, there’s a heck of a lot more to the position than simply pressing a button.

At NHRA National events, chief starters arrive at the track well before the public is allowed to enter and work with the Safety Safari on track preparation. They’re often the last to leave the track each night, as well. The four gentlemen named above all knew the competitors and were able to work with them if there were issues at the start line. They also knew who staged light, who staged deep and constantly worked to make sure they who were the ones who started the race, not the racers.

With today’s automation and the cars’ “auto start,” perhaps a national chief starter isn’t a complete necessity to the folks who run NHRA. It does raise the question of track and competitor knowledge, as many regional and divisional starters are unfamiliar with the professionals who might race on their division’s tracks once, or possibly twice, each year.

What about the difficulties of starting a four-wide contest? NHRA races four-across twice each year, at Las Vegas and Charlotte, NC; there are intricacies to staging and releasing four cars or motorcycles at once.

While it’s good that NHRA is increasing payouts to its nitro Top Fuel and Funny Car categories this year, perhaps doing so at the expense of dismissing “the racer’s best friend” isn’t in the sanctioning organization’s best interest?