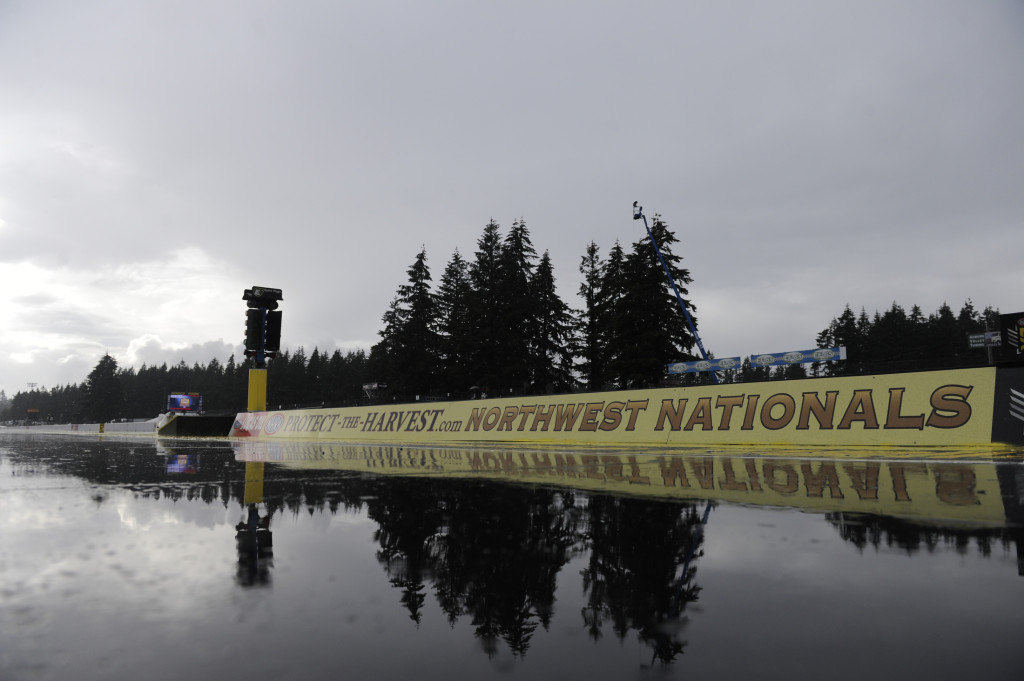 Just as the build up to the final rounds were approaching at the Protect the Harvest NHRA Northwest Nationals, rain showers returned to Pacific Raceways forcing NHRA officials to compete the nitro classes in Brainerd, Minn., for the Lucas Oil Nationals and the Pro Stock category to be determined at the Chevrolet Performance U.S. Nationals in Indianapolis, Labor Day weekend.

The race had an hour and a half delay by the same pesky showers that roamed in and out of the Puget Sound, but when it stopped, it left incredible track conditions for three rounds of competition before the event was postponed Sunday evening.

Steve Torrence and Antron Brown will battle it out at Brainerd International Raceway in two weeks for the Top Fuel Northwest Nationals title delayed by weather at Pacific Raceways.

Torrence beat Scott Palmer in Sunday’s first round, avenged last week’s loss to Richie Crampton in round two and dispatched of J.R. Todd after running 3.695 seconds in the semifinals to reach the money round for the fifth time this season.  He is 2-2 in previous finals with wins at Pomona, Calif., and Englishtown, N.J.

Brown reached trophy round roaring by a tire-slipping Morgan Lucas to record a time of 3.736 seconds, 322.58 mph to make it to his 103rd final round.

“It’s pretty disappointing not to get this thing run today,” Torrence said, “but no matter when or where we finally run it, we’ve got a team and a hot rod that can win it.”

Torrence will pick his lane against Brown in Brainerd.

Brown extended his Top Fuel points lead to 100 points over Doug Kalitta after he lost in the opening round of Sunday’s eliminations.  A win over Torrence would pad that by 20.

“It’ll put a little pressure on us (in Brainerd) but it also puts a little more meaning in qualifying which is special,” Brown said.  “It doesn’t make a difference who you run, you have to run quick to beat everyone right now.  The Capco (Torrence) car has been a strong, dominate force this whole year but we are right there.  I think it’s going to be a great show.  We’ll see how we can finish this bad boy off.” 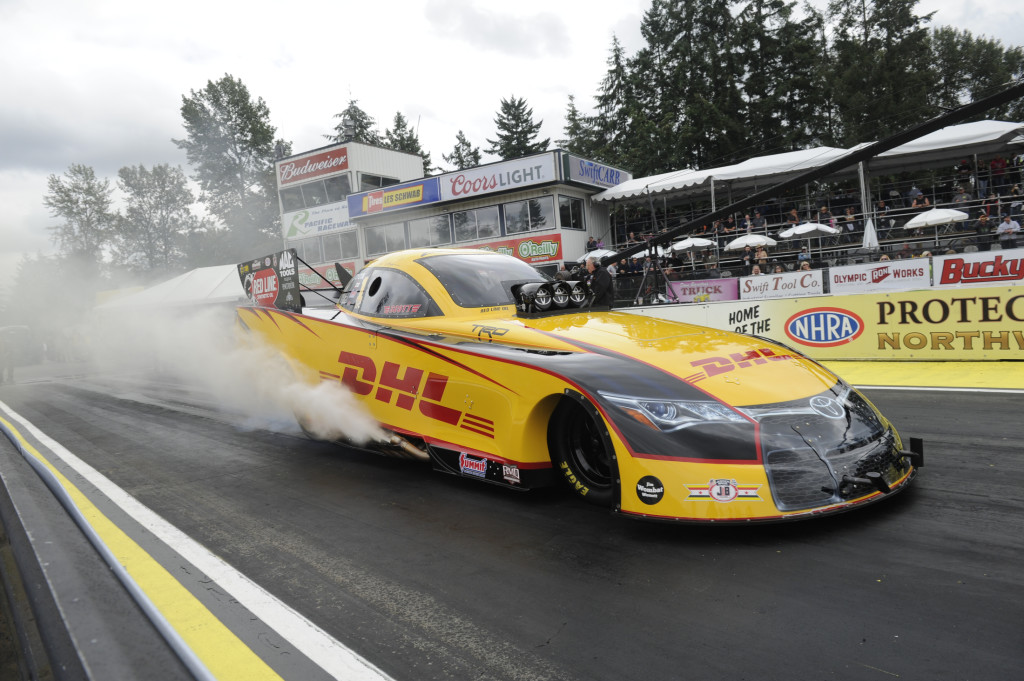 This one class thrilled the crowd in Seattle with continued record runs every qualifying session.  Funny Car finalist, Del Worsham lowered the National elapsed time record three consecutive times over the weekend with the official number finally resting as 3.832 seconds that he secured in the final session to let everyone know, his DHL yella fellas are just warming up for the Countdown.

“I so wanted to finish what we have started here,” said defending Funny Car champion, Worsham  The car has been on a rail all weekend, and now we have to go to a different track two weeks from now to finish this event.  However, I have the most confidence in my guys and our team.  We’ll go to Brainerd planning on scoring the Seattle trophy there.”

Worsham defeated Matt Hagan in the semi-finals running 3.864 seconds at a booming speed of 330.96 mph to Hagan’s impressive, but losing pass of 3.887 seconds becoming the quickest side-by-side Funny Car race in NHRA history.

Capps and the NAPA Don Schumacher racing team extended its lead in the NHRA Mello Yello Drag Racing Series Funny Car standings by advancing to their eighth final round with a chance to win a fifth title in 16 races.

“I feel bad for the fans that saw three great days of racing before today got hit by a few showers,” Capps said.  He will arrive at Brainerd with 189-point lead over Courtney Force with two events remaining in the NHRA regular season that ends after the U.S. Nationals near Indianapolis.  A win over Worsham would extend Capps’ lead to 209 points.

In an eerily similar situation resembling Alexis DeJoria’s crash from last week in Sonoma, Courtney Force was desperately trying to recover after smoking her tires in the first round against Jeff Diehl.  In her attempt to catch him, she again lost traction slapping with a hard whipping action buckling the left lane wall at 140 mph.  She was transported by ambulance to Valley Medical Center in Renton, Wash.   Force exited the vehicle on her own power and was checked by NHRA emergency services before heading to the hospital to be evaluated for knee and elbow injuries where she was treated and released.

In a rare scene, Washington state race fans had hometown driver, Aaron Strong of nearby Auburn, score his first three round wins of his career before the rains came.  In the process, he vanquished a ‘who’s who’ of Pro Stock racing beating Greg Anderson, Erica Enders and Bo Butner to face off against Vincent Nobile in the money round for the first time of his young career.  This finale will take place during the U.S. Nationals in early September.

“It’s really exciting to race here but also nerve-wracking because I have so many friends and family out here to watch me,” said a smiling Strong.  “I’m probably the most familiar with this track.  I’ve made more passes down it bracket racing over the years, but Pro Stock is a whole different deal.  We couldn’t be happier with what we have been able to accomplish here at home, and we hope it continues.”

This is the second final round Nobile has been to in the last three races.  He was runner-up to Allen Johnson just two weekends ago in Denver.  He was the No. 1 qualifier at Pacific Raceways with a time 6.527 seconds, 211.49 mph.  He marched through eliminations with a first round bye; beat Shane Gray in a close race in the quarterfinals before seeing race favorite, Jason Line red light in the semi-finals after line-lock problems.