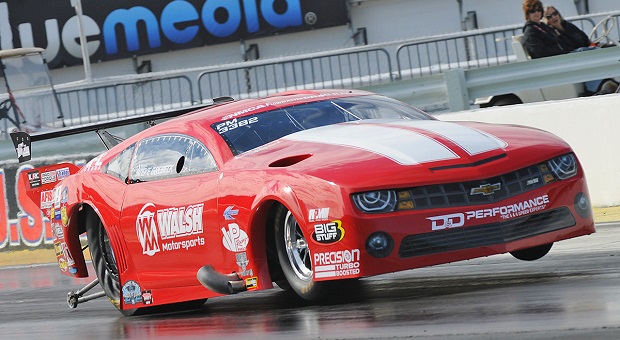 “Aeromotive is proud to be the title right sponsor for the NHRA Pro Mod class at the Vegas Nationals,” said Steve Matusek, president of Aeromotive Inc. and Pro Mod racer. “This is our third year sponsoring Pro Mod at this event and it has been very gratifying to see the Pro Mod class grow, both in popularity with the fans and participation with the racers. In our opinion this is the most competitive heads-up class in NHRA and we are looking forward to continuing our partnership with this class for years to come.”

“The NHRA is very happy to announce that Aeromotive Inc. will once again be the presenting sponsor of the Pro Mod race in Las Vegas,” said Brad Gerber, NHRA vice president and chief development officer. “The NHRA Toyota Nationals is the final race of the NHRA J&A Service Pro Mod Drag Racing Series season and a champion will be crowned at the event. The Pro Mod class has been exciting all season long and we are ecstatic Aeromotive will again help the NHRA bring another weekend of thrilling Pro Mod racing to Las Vegas.”

Featuring the world’s fastest and most unique doorslammer race cars, the NHRA J&A Service Pro Mod Drag Racing Series offers something for every kind of hot-rodding enthusiast. The growing class is highlighted by historic muscle cars, like ’67 Mustangs, ’68 Firebirds and ’69 Camaros, as well as a variety of late model American muscle cars. With more than 3,000 horsepower, the suspended door Pro Mod cars travel the quarter-mile in less than six seconds at speeds exceeding 250 mph.

The 2016 NHRA J&A Service Pro Mod Drag Racing Series concludes at the NHRA Toyota Nationals and Rickie Smith is on the cusp of his fourth series championship. Smith has two wins this season with one runner-up finish and two No. 1 qualifying positions. Smith leads Troy Coughlin by 93 points heading into the event.