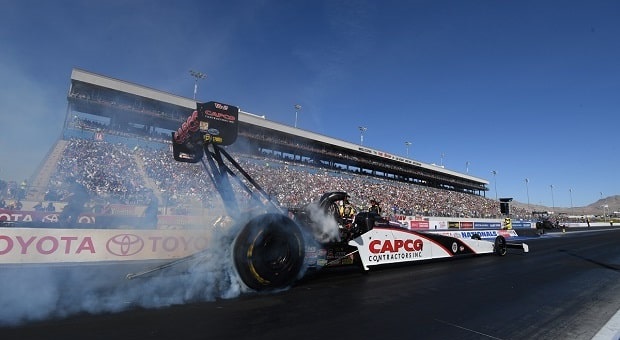 NHRA annually makes a full circle, starting and ending its 24-race seasons on the Auto Club Raceway at Pomona dragstrip. Each February, it’s the site of new opportunities; come November, Pomona serves to crown national champions for the season.

Top Fuel has been decided in favor of Texan marauder Steve Torrence and his CAPCO Contractors family team, who parlayed 10 event victories – five of them in the five Countdown to the Championship races already held – while all the other categories are up for grabs. Torrence will be looking to cement the season by running the table and securing all six victories in the six-race Countdown playoffs.

With points-and-a-half on offer, the rest of NHRA’s Mello Yello combatants, in Funny Car, Pro Stock and Pro Stock Motorcycle have incentive to qualify and race well this coming weekend. In all, 191 points are on the table and available for the taking, should a contender figure out the conditions and get their tuneup optimal for the sunny, warm and low-humidity weather that’s on tap in the San Gabriel mountain foothills.

Top Fuel’s remaining nine positions are still available for stirring, with Clay Millican (2 wins) holding only a 23-point advantage on Tony Schumacher (1). This is the final race for Schumacher’s longtime sponsor, the U.S. Army, and he’ll be looking to continue the consistency that’s brought him into the top three.

Salinas, in particular, is gaming for his first victory with the Scrappers Racing dragster and achieving it in his home state would be a plus. He’s got assistance from Alan Johnson that’s pushed his program forward at warp speed in the driver’s first full season and only his 38th Top Fuel race in Pomona. 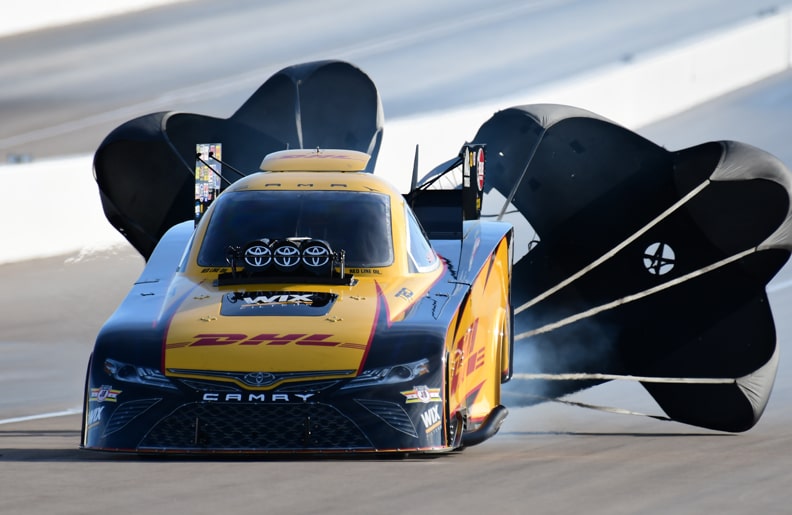 The stakes are truly high in Funny Car, where J.R. Todd’s Las Vegas victory propelled him to the top of the rankings in his Kalitta Motorsports Toyota Camry flopper. The former Top Fuel racer has five wins on the year to reigning champ Robert Hight’s four in his John Force Racing Chevrolet Camaro SS. That equates to a 74-point advantage for Todd, with 2016 class champ Ron Capps (3 wins) 165 points back in his Dodge Charger R/T from Don Schumacher Racing.

The gap from first to tenth in Funny Car is a larger chasm, with Todd holding a 349-point advantage on Kalitta’s Shawn Langdon. The latter, along with fourth-and-fifth-placed Tim Wilkerson (TWR Ford Shelby Mustang) and DSR’s Tommy Johnson Jr are currently winless on the season but have earned qualifying points and gone a sufficient number of rounds to keep them in the hunt.

Points leader at the close of the 18-contest regular season Courtney Force (4) is now in sixth place after failing to convert in the Countdown; her father, John Force (1) holds ninth-place points as he seeks his record 150th flopper victory. Seventh and eighth place DSR regulars, Matt Hagan (3) and Jack Beckman (2 wins) are both using DSR’s new Dodge Hellcat SRT body; Hagan began using it at Denver, Beckman in Indy and their development work should come to fruition in 2019.

It would appear Tanner Gray has his one-and-done Pro Stock championship in the bag with seven victories and 2583 points after 23 races, but five-time category champ Jeg Coughlin Jr is keeping him honest in this all-Chevrolet Camaro battle between ten drivers. True, Gray’s got 140 points on Coughlin, but anyone who remembers his freshman meltdown at last year’s finale can have a modicum of hope Coughlin or Elite Motorsports teammate Erica Enders, a two-time class champ, can give him a few hiccups before he heads for NASCAR.

The gap from first to tenth in Pro Stock is a gaping 448 points, but there’s plenty of room for movement behind Gray, Coughlin and Enders. Gray’s teammate Drew Skillman, who hasn’t won this year but had four victories in 2017, is in fourth place and the final racer in the 2400-point bracket. Behind him are three-race-winner Vincent Nobile, Jason Line and Greg Anderson (each with a single victory), 2017 champ Bo Butner, Deric Kramer and Chris McGaha, each of whom has earned two wins this season.

There are only 16 races in Pro Stock Motorcycle, a schedule Pro Stock will emulate in 2019. Matt Smith has surged in the Countdown and overtaken both Eddie Krawiec and LE Tonglet. The Victory rider’s three victories – two in the Countdown – pushed him four points ahead of Krawiec’s Vance & Hines Screamin’ Eagle Harley-Davidson and 61 ahead of WAR Racing Suzuki rider and new father Tonglet. Both Krawiec and Tonglet welcomed new off-spring this week.

The Countdown chase in NHRA’s two-wheel class is its tightest, with a scant 270 points separating Smith from Scotty Pollacheck’s Suzuki in tenth. The latter rider will likely sit out next season unless a proper ride becomes available, after earning fourth-place results just a year ago. Las Vegas victor – and first to 200mph – Hector Arana Jr. is in fourth place with his EBR Buell, followed by Jerry Savoie’s WAR Suzuki.

Twenty-three races and it’s come down to this: four rounds of qualifying and four rounds of eliminations will crown three new champions for the 2018 season. It should be possible to feel the tension before setting foot on Fairplex, the grounds where this historic event takes place.

The entry list shows a bevy of contenders for 16 spaces in eliminations: there are 18 Top Fuel dragsters entered, 20 Funny Cars, a healthy 20-car entry for Pro Stock and 21 expected in Pro Stock Motorcycle.

As the hawkers on radio always said in anticipation of drag racing events back in the day: Be there!

About Anne Proffit 633 Articles
Anne Proffit traces her love of racing - in particular drag racing - to her childhood days in Philadelphia, where Atco Dragway, Englishtown and Maple Grove Raceway were destinations just made for her. As a diversion, she was the first editor of IMSA’s Arrow newsletter, and now writes about and photographs sports cars, Indy cars, Formula 1, MotoGP, NASCAR, Formula Drift, Red Bull Global Rallycross - in addition to her first love of NHRA drag racing. A specialty is a particular admiration for the people that build and tune drag racing engines.