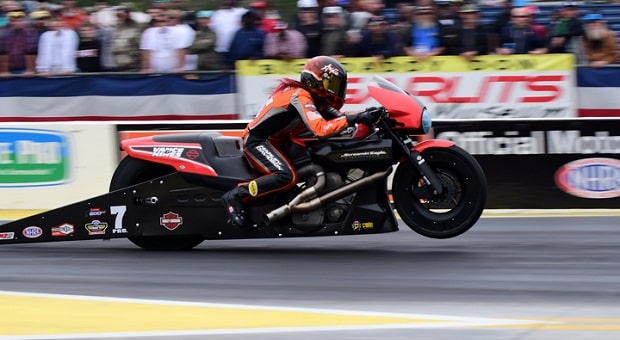 For the Mello Yello Pro Stock Motorcycle class, NHRA stated that, after evaluating performance numbers from the final 2018 races through to last weekend’s season starter, the tech department is increasing the minimum weight for four-valve competitors’ Harley-Davidson, Victory, EBR and Buell motorcycles from 625 pounds to 640 pounds, effective immediately.

All other motorcycle minimum weights remain the same, with two-valve, 107cid Suzukis at 590 pounds and 113cid Suzukis at 600 pounds. This news, announced on the first day of spring, brought veteran Suzuki racer Steve Johnson to announce he was looking forward to eating again, with the 40-pound advantage his motorcycle will have over the V-Twins and Harleys.

“It feels so good to give up broccoli!” he said. Johnson later re-read the rule and realized, “So much for the buffet.”

In other Pro Stock Motorcycle news, Vance & Hines confirmed Angelle Sampey’s partnership with the team for the full 2019 season, increasing her scheduled races as teammate to 2019 Gatornationals winner Andrew Hines and Eddie Krawiec from four to 16 contests.

“In Gainesville we saw how well Angelle interacted with the fans and how well she fit in with her new team. This was an easy decision,” team co-owner Terry Vance told NHRA.com. “We didn’t want her in a position where she felt a lot of extra pressure during the first four races, so we went ahead and extended the deal.”

At the same time, NHRA’s technical department announced parity adjustments for the E3 Spark Plugs Pro Mod category after judging times and speeds towards the end of 2018 and its first race of the year in Florida. The tech squad are reducing minimum weight of nitrous-assisted entries that use a lock-up converter, taking off 25 pounds and leaving these entrants at 2,425 pounds minimum weight. The rules change goes into effect immediately.

NHRA continues to give find ways to optimize its SAMTech.edu Factory Stock Showdown, after FCA’s 2015 Dodge Challenger secured the championship with Leah Pritchett in 2018. Basing their changes on the first race of the year, held at the Gatornationals, the NHRA tech department is increasing supercharger top pulley size on the 2019 [Chevrolet] COPO 350 combination from 3.350 to 3.500 inches. The 2019 [Ford] Cobra Jet 327 has an increase from 3.250 inches to 3.500 inches.

These adjustments, NHRA says, “Will decrease the 2019 COPO 350 combination supercharger overdrive from 147.5 percent to 136.6 percent overdrive, or 10.9 percent. Additionally, this will decrease the 2019 Cobra Jet 327 combination supercharger overdrive from 146.2 percent to 128.6 percentage, or 17.6 percent. As a reminder, no other changes may be made to all approved superchargers,” NHRA reminded, “including, but not limited to upper or lower pulley sizes, gear rations, cases, rotors etc.”

As with Pro Stock Motorcycle and Pro Mod, these changes for Factory Stock Showdown go into effect immediately and could be changed at NHRA’s whim.