It’s pretty well recognized that four-wide NHRA Mello Yello racing is a crapshoot. While it’s always important to race the tree first and your opponent next, having four cars or motorcycles line up presents unusual challenges. Each year NHRA has a pair of four-wide contests. After last week, they’re done and it’s time to get back to core racing in the seventh race of a 24-contest season.

That was an occasion where 2018 Top Fuel champion Steve Torrence found his braggadocio once again, the Texan earning his first Wally winner’s trophy of the year and taking over the points lead from Doug Kalitta. Doing battle in the finals, Torrence defeated Clay Millican Terry McMillen and Leah Pritchett, the latter returning to Atlanta as reigning Top Fuel event champion. Pritchett’s Don Schumacher Racing (DSR) teammate Antron Brown has raced to six combined wins in Top Fuel and Pro Stock Motorcycle at the Georgia track – could this be his breakout race?

This weekend’s Top Fuel entry list finds Jordan Vandergriff back in action and likely to meet his Auto Club Road to the Future rookie award contestant Austin Prock. These two just seem to regularly battle one another. Their youthfulness is contrasted against Luigi Novelli, who is hoping to qualify for the event. Dominick Lagana, who raced to the semifinals last weekend, is on the entry list again for the Atlanta round, as are Pat Dakin, Shawn Reed, Audrey Worm and Lex Joon. There are 18 dragsters vying for 16 elimination spots.

Funny Car racer Shawn Langdon broke through for victory last week in his Kalitta Motorsports Toyota Camry, becoming the 17th driver to win in both Funny Car and Top Fuel (teammate J.R. Todd was the 16th). The humble Californian moved to eighth place in the points standings, just one point from seventh.

“Working with Nicky Boninfante, who’s been out here for years and worked with some of the greatest drivers in the sport, then to bring Del Worsham in has been a key factor,” Langdon said of his victory in Charlotte. 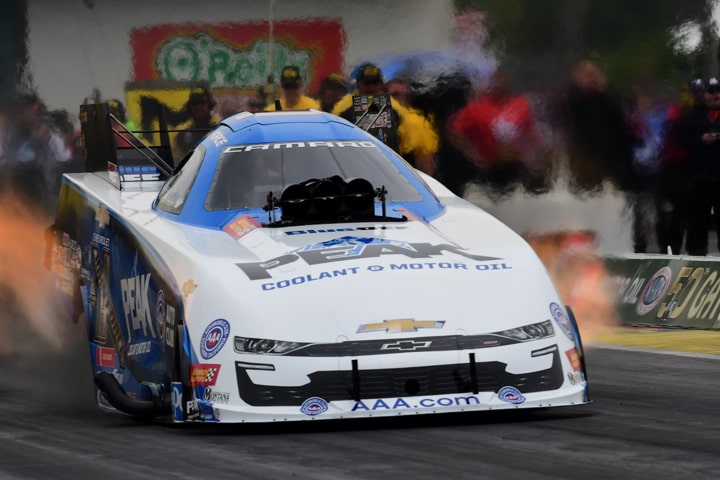 Capps is in a strange place right now, looking at a similar drought of round wins that he turned around after this race last year. Last weekend’s mechanical maladies on the DSR team’s Dodge Charger SRT Hellcat were emblematic of his roller-coaster season.

“We had a great car in Houston and it felt like we were hitting our stride, but I got in the car on Friday in Charlotte and all of a sudden it was wanting to go right real hard,” Capps explained.

Capps’ NAPA Auto Parts team switched to its spare chassis between rounds on Saturday, but the car just didn’t run as the team hoped. At this point, in similar fashion to 2018, the 2016 champ has five round wins, which handily explains his lower standing in the points tally. The team intended to “front-half” the primary chassis but it likely won’t be completed until the next race, a May 17-19 contest at Richmond, VA.

“Back-to-back weekends are great when you don’t have a great Sunday, because a few days later you can redeem yourself and get right back at it,” Capps said after his Monday zMAX test. “It’s been a slow start by our standards and I don’t like being in the bottom half of the top 10. It’s weird for us, but if we get our car back, we can make a big move. I’m glad to see these weekends coming up.” There is no reigning event champ in this Atlanta race; Courtney Force, who has stepped away from driving, won in 2018.

Courtney Force’s father John is celebrating his 70th birthday at the Georgia track this weekend and is hoping for the kind of racing luck that’s given this legend 16 championships and 149 national event wins to chip in another victory for an even 150. It won’t be easy; he’ll have to earn it, but with a stellar crew chief like Brian Corradi (who worked with his daughter Courtney last year) it could happen.

There’s a tough, 17-car field riding to Atlanta for this weekend’s competition. In addition to the top 10 combatants, fans can witness the return of Paul Lee in an ’18 Dodge Charger, after nearly perishing from a “widow-maker” heart attack in late 2016; he’s being tuned by Jim Oberhofer. The Surfer, Jeff Diehl continues his hegira for a national event win in a Toyota. Blake Alexander returns with his newly-minted team and Dave Richards is hoping to make the field, both of these drivers driving 2018 Ford Mustang floppers. 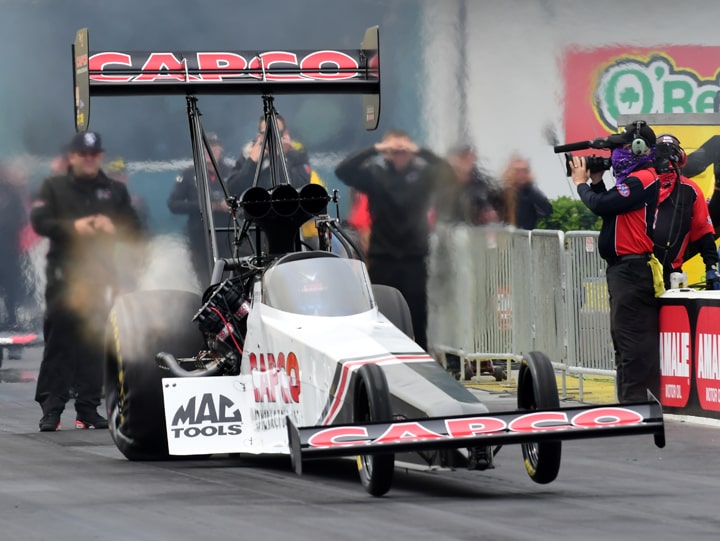 There are “only” 17 Pro Stock Motorcycle (PSM) entrants listed for the Atlanta race, but the numbers don’t adequately show the talent that’s gathered to compete this weekend. After collecting his second victory in the still-young 16-race PSM season last weekend at zMAX, five-time champ Andrew Hines is riding high on his Vance & Hines Harley-Davidson Street Rod, holding 319 points over teammate Eddie Krawiec, who has 281.

Hector Arana Jr., the first PSM rider to 200mph, is in third place, riding his family-prepped EBR and gunning for his first championship. With a single victory and two semifinal results thus far, he’s got his head in the right place.

“We’re definitely in a great spot this year and we’re trying to race with a plan and strategy,” the second-generation PSM rider said. “We’re focused on trying to look at the long-term and trying to study each run. If we have issues, we want to focus on how to fix them and prevent them. We definitely have a strategy, but I feel like we’re in a good place and I feel a lot stronger mentally.”

Jianna Salinas, who took her first laps on a PSM Suzuki prior to the season starting 50th annual Amalie Motor Oil Gatornationals in March, appears to be taking a step back before returning to competition. She hasn’t made the field in three tries and likely needs a few more practice laps before returning to professional competition. There are still six women in the field, led by Vance & Hines’ Angelle Sampey, last week’s No. 1 qualifier Karen Stoffer (WAR Suzuki) and Angie Smith (EBR).

What every drag racer will combat this weekend in Commerce is the weather. While temps will be in the low to mid 80-degree range throughout the scheduled race meeting, both Saturday and Sunday are supposed to be plagued by thunderstorms. Forecasts have been wrong before now, but it’s still possible this 39th Arby’s NHRA Southern Nationals may run on Monday, not Sunday this year. 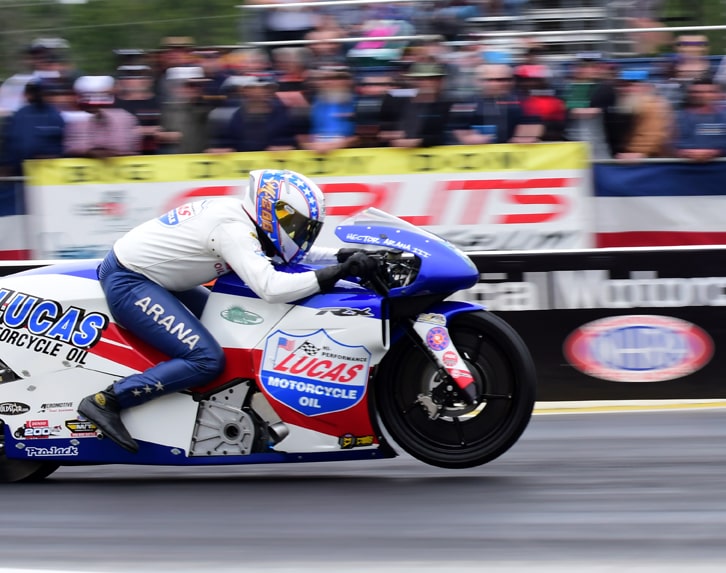