Although the first two weeks of the 2017 NHRA season would mean a whole lot more to those dreaming of championships in the top levels of drag racing, the legends of drag racing would be all the rage at the 48th annual Amalie Motor Oil NHRA Gatornationals at Gainesville Raceway. 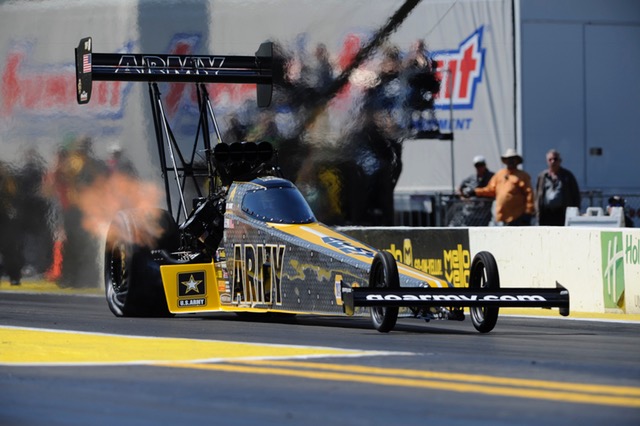 Eight-time Top Fuel world champion Tony Schumacher raced his way to another Top Fuel victory Sunday at the 48th annual Amalie Motor Oil NHRA Gatornationals at Gainsville Raceway. After securing the number one qualifying position with a track elapsed time record pass of 3.682 seconds at 328.22 MPH, to earn his 81st career No. 1 qualifier in the second qualifying session on Saturday, Schumacher continued to dominate on Sunday after defeating Smax Smith, Clay Millican and Steve Torrence to take on reigning world champion Antron Brown in the finals. Schumacher would ultimately defeat Brown with a 3.703 second pass at 329.26 MPH in the final race for his 83rd victory of his drag racing career.

With this win, Schumacher becomes the winningest Top Fuel driver at Gainsville Raceway, with five wins, after previously being in a four-way tie.

“The Gatornationals to me, even as a kid, was always one of the greatest moments for my father,” said Schumacher. “It’s a great chance and a great opportunity. When you’re given a great opportunity, you surround yourself with people capable of that moment, which we have done. As a result, I’m comfortable driving the car. It’s running right down the middle and it is running extremely fast. In fact, it is doing everything that a driver dreams about and I can’t thank my team enough for this.”

Despite this win, Schumacher still sits 21 points behind the Girl On Fire, Leah Pritchett, in the points standings. Pritchett would struggle a bit at this weekend’s Gatornationals and be eliminated by Doug Kalitta during the second round of elimination races on Sunday. 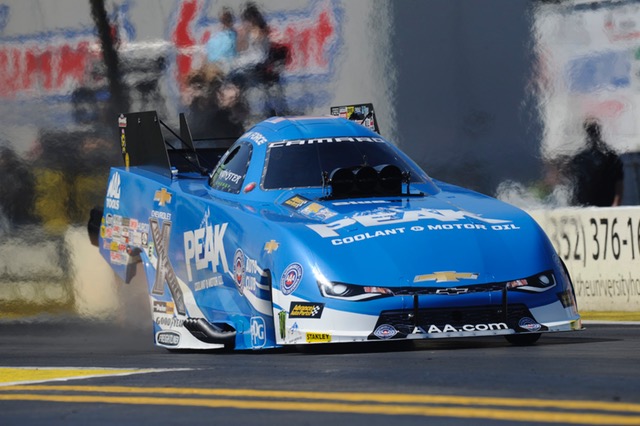 Schumacher wasn’t the only world champion driver to add to his win list on Sunday. World Champion Funny Car driver and the winningest driver in NHRA history, John Force, would once again find himself on the podium following Sunday’s final round. After picking up a number one qualifying position during Saturday’s qualifying rounds, Force would move on to race past Del Worsham, Jack Beckman and Tommy Johnson Jr. during Sunday’s elimination races to take rookie Jonnie Lindberg in the finals. Force would show this rookie how it is done by defeating his 3.971 second pass at 314.83 MPH pass with his own 3.928 second pass at 328.14 MPH in his PEAK Chevy Camaro Funny Car for Force’s 148th victory of his career and eighth at Gainesville Raceway.

“I made a lot of changes coming here and I don’t know if I’m smart or just lucky,” said Force. “I surround myself with great people and they are the ones who make it happen, then the sponsors and then the cheer of the crowd… A lot of things are about heart, and about luck. You always feel somebody up there likes you and I have been real lucky!”

This victory also marks the 2,500 Funny Car round win for John Force Racing. 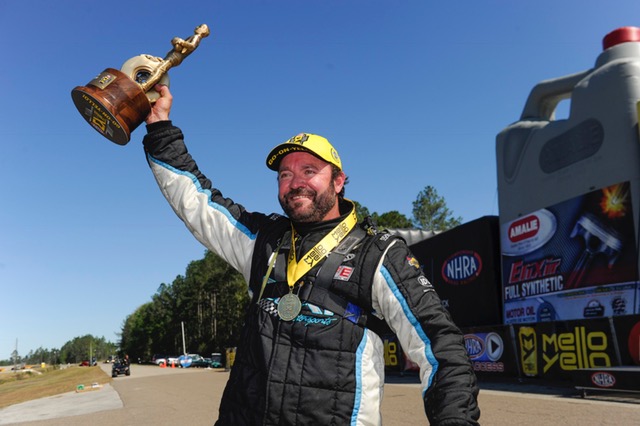 The biggest surprise win on Sunday came from Pro Stock driver Shane Gray. This NHRA veteran turned the reigns of his team’s primary car over to son Tanner Gray after the 2016 season, but decided to drive a second Gray Motorsports Pro Stock Camaro at the first few events of the 2017 NHRA Mello Yello Drag Racing Series season.

According to Gray, the plan was to “give the team twice as much data every round to help Crew Chief Dave Connolly and the guys prepare Tanner’s car.”

While this may be the ultimate goal, Gray isn’t disappointed to pick up a little more hardware in the process. “When you’re testing parts you’re just not supposed to win, which is basically what we are doing with my car,” said Gray. “We had a lucky day today. There were some round wins when the car pulled me out of the hole and there were a couple rounds where I pulled the car out of the hole. It was a complete team effort.”

Gray turned on win lights against Allen Johnson, Erica Enders and Chris McGaha in Sunday’s elimination rounds before taking on Greg Anderson and his Summit Racing Equipment Chevy Camaro in the finals. Gray would defeat the four-time champion with a 6.535 second pass at 212.96 MPH in his Gray Motorsports Chevy Camaro for his sixth victory of his career.

The 2017 NHRA Mello Yello Drag Racing Series season continues at The Strip at Las Vegas Motor Speedway March 31-April 2. Stay tuned to RacingJunk.com for all of your NHRA coverage!