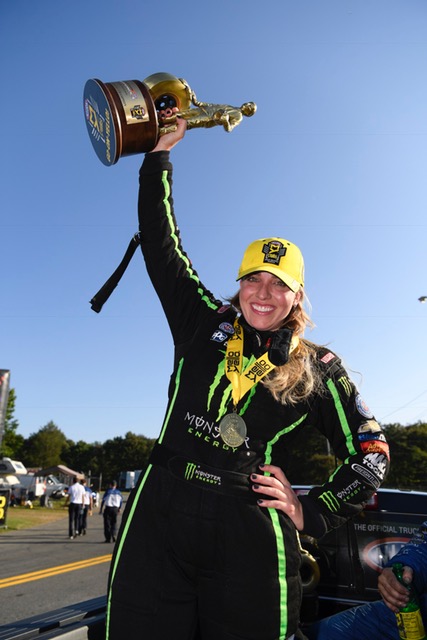 John Force Racing driver Brittany Force, who qualified fourth for this weekend’s race, moved on to defeat Wayne Newby, Tony Schumacher and reigning world champion Antron Brown to move on to her third final round of the year.

During Sunday’s final elimination round, the daughter of famed Funny Car driver John Force took down Torrence Racing driver Steve Torrence with a 3.756-second pass at 326.24 MPH in her Monster Energy dragster to secure her second victory of the season and first since the event in Epping, N.H. in June.

“It is because of my Monster Energy team that we got this win,” said Force. “I have been to the final round here three times and got taken down in the first two, so this one was a big one for us.”

Despite his runner-up finish in this weekend’s finals, Torrence has reclaimed the Top Fuel points lead going into next weekend’s Midway Nationals. 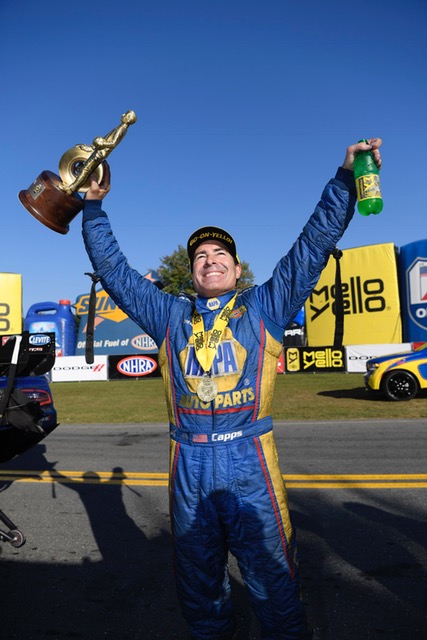 While Force earned her second victory of the 2017 season, Funny Car driver Ron Capps pulled off his category-best seventh victory of the season this weekend.

After earning his third qualifying position, Capps took down 2016 event winner Tommy Johnson Jr., Jim Campbell and Don Schumacher Racing teammate Matt Hagan on the way to his tenth final round this season.

In order to earn his 57th career win, Capps would have to take down another Force daughter in Sunday’s final elimination round. With a 3.968-second pass at 326.48 MPH in his Napa Auto Parts Dodge Charger R/T, Capps defeated Courtney Force to reclaim the Funny Car points lead in the current Countdown to the Championship.

“We got lucky a little bit in the first round, but we were fortunate enough to win this with consistency,” said Capps. “We know this Funny Car class is as tough as it has ever been, so we know it won’t be easy to maintain the lead through the last four races of the year.”

From one champion win to another, Pro Stock driver Bo Butner also locked down his fourth career victory this weekend after grabbing the top qualifying spot and taking down Val Smeland, Erica Enders and Allen Johnson to move on to his ninth final round of 2017.

“We had eight good runs this weekend so things worked out in our favor this time around, which shows how strong our team is,” said Butner. “I’m really excited about where we are at, but we know there are still four more races left so we just have to keep doing our jobs going forward.”

The 2017 NHRA Mello Yello Drag Racing Series Countdown to the Championship continues with the AAA Insurance NHRA Midwest Nationals at Gateway Motorsports Park in St. Louis on Sept. 29-Oct. 1. Stay tuned to RacingJunk.com for all your NHRA coverage!