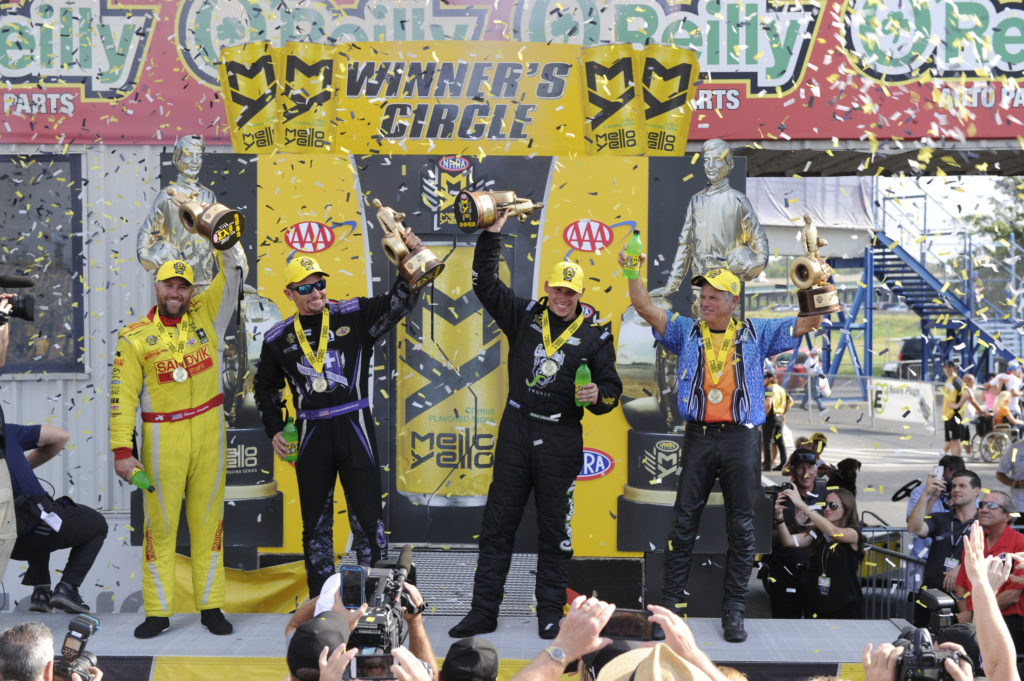 The second race of the NHRA Mello Yello Countdown to the Championship was a grand day for Don Schumacher Racing at the AAA Insurance NHRA Nationals at the Gateway Motorsports Park, claiming both nitro categories, producing Top Fuel winner Shawn Langdon, and Jack Beckman in Funny Car only tightening up the championship.

A brand new face was spotlighted in the Pro Stock winner’s circle with Texan Alex Laughlin winning his division, denying Bo Butner his first win.  Alligator farmer Jerry Savoie took a bite out of the Pro Stock Motorcycle class in a ‘Bayou Brawl’ when fellow Louisianan Angelle Sampey red-lighted in the two-wheel finals. 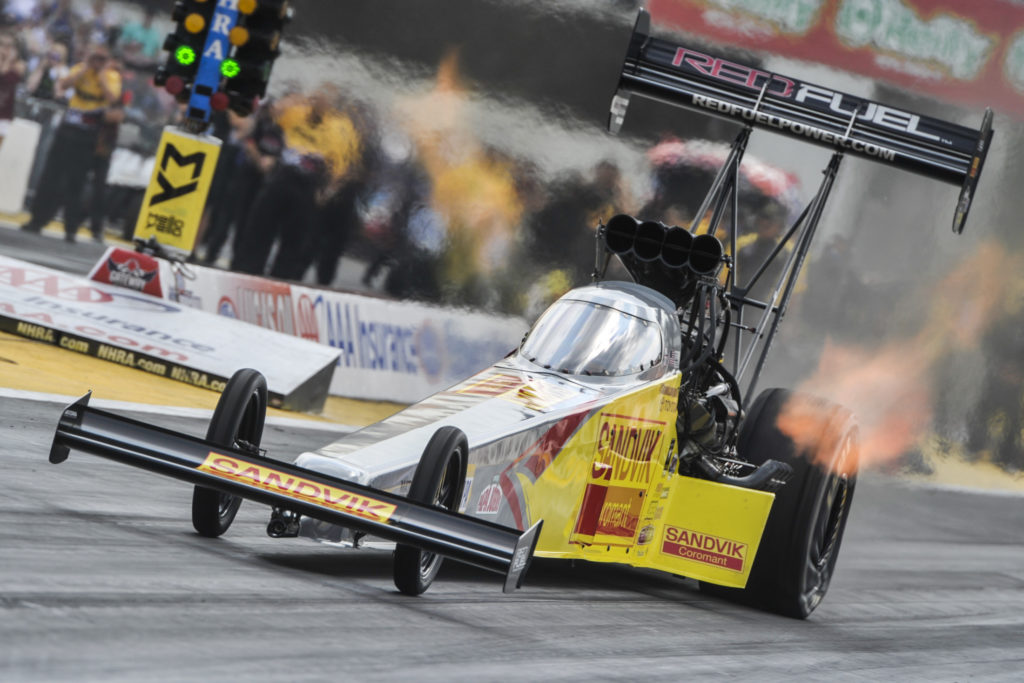 It was a successful day in St. Louis for Shawn Langdon as he defeated his Top Fuel DSR teammate Tony Schumacher, moving up from seventh to fourth in the standings and making it clear that the 2013 Top Fuel champion wants a second title.

It was his third event title of the 2016 season and first at Gateway Motorsports Park, and although the Missouri heat and humidity challenged many teams, Langdon’s other wins came in the midst of summer, winning at Bristol and Norwalk.

“We didn’t have a great car in qualifying; we were fourth or fifth quick,” Langdon said.  “But we just kept working away at it.  That’s what we’ve been doing since we got our two wins earlier (this year).  We hit a little bit of a slump, made a few changes and then we got a new car at Indy.  The car has responded well.

“We’ve had a good car, just a couple little mistakes in the two rounds we lost, but it’s always easy to look back after the run and see what you did wrong.  All in all, just a great team effort.  We had a couple little struggles today – warming the car up before the semis, and then we had an ignition issue, but they gave me a great race car and if I could keep it straight I felt good about my chances.”

His trip to the winner’s circle was anything but easy; he faced current point leader Antron Brown in the opening round, then No. 2 Doug Kalitta in the quarterfinals, and took on Richie Crampton in the semi-finals.  After outrunning these three, in the finals he found another DSR teammate, eight-time champion Tony Schumacher, over in the other lane.

“I don’t know what changed today,” he said.  “I was just really good on the tree.  I was racing my Sportsman car last night, I lost, and I was pretty ticked off about it.  Throughout the year, you try to treat every race the same, but when you get into the Countdown, there’s a little bit of a spark or an edge, so any time you lose you get ticked off.  I think maybe a little Sportsman racing didn’t get the job done, and it gave me a second chance today and I was able to do a decent job.

“Sometimes you just need to get the right race at the right time and we were fortunate to get four good races today.  You’re together all year long and the last thing you want to do is knock your teammate out of contention, but in getting around him, it gave us a shot to get back into contention. Then beating Doug in the second round was very key in our day.  We’re back in contention and we have a shot at a championship heading into these four remaining races.  That’s all we really want is a shot at winning a championship at the end of the day.” 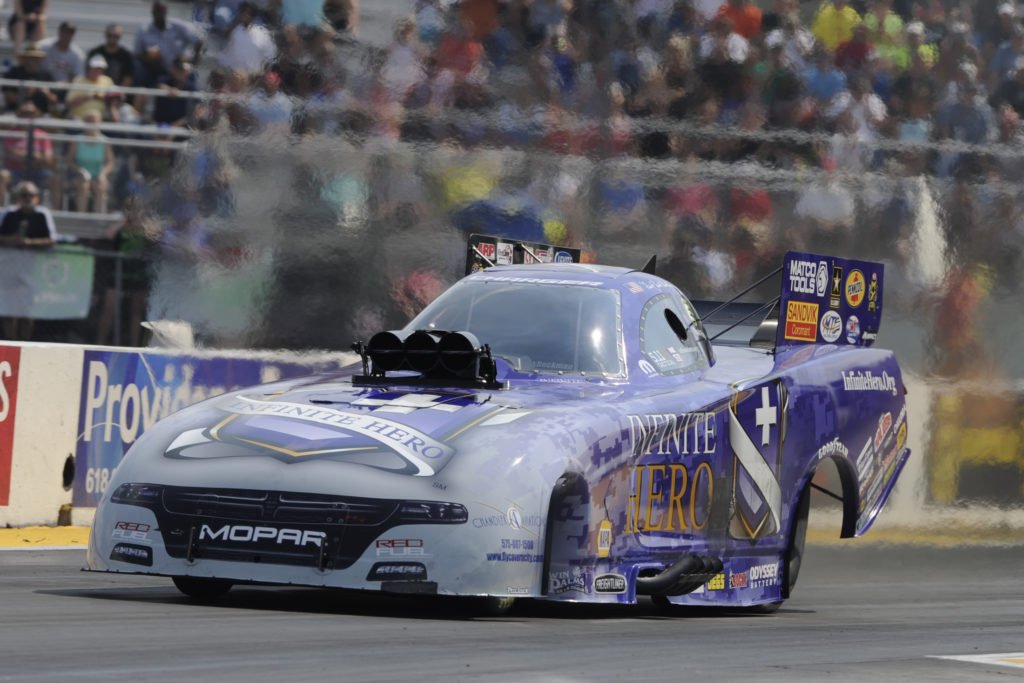 When certain things fall your way, fate goes with you in Funny Car.  That’s what Jack Beckman got to experience on Sunday in the AAA Insurance Midwest Nationals in St. Louis, having quite a lot of luck after nearly getting beat by Dale Creasy, Jr. in the first round, and then beating John Force in the quarterfinals on a hole shot by .001 of a second margin of victory.  Then he had to get by two DSR teammates; first, current points leader Ron Capps, and in the finals, Tommy Johnson, Jr.

In the semifinals, it was an all-Mopar match between Beckman and Capps, and both were extraordinary at the starting line – but at the top end, it was Beckman with a more precise tune-up.  He muscled his way to the finish line with a speedy 3.954-second elapsed time at 319.60 mph in his streaking Dodge Charger as Capps dropped cylinders and clocked a pass of 4.112 seconds, 285.71 mph.

“I’ve had some pretty mediocre outings as a driver the last few races,” admitted Beckman.  “You want to be there with your driving, and the car has saved me a couple of times.  I think my confidence was down, and I’m not quite sure what changed, but I had a good outing today as a driver.  I’ve had a few of those that don’t end up in the winner’s circle, but the guys tuned smart, I did my job, and we turned on the win light every time.” 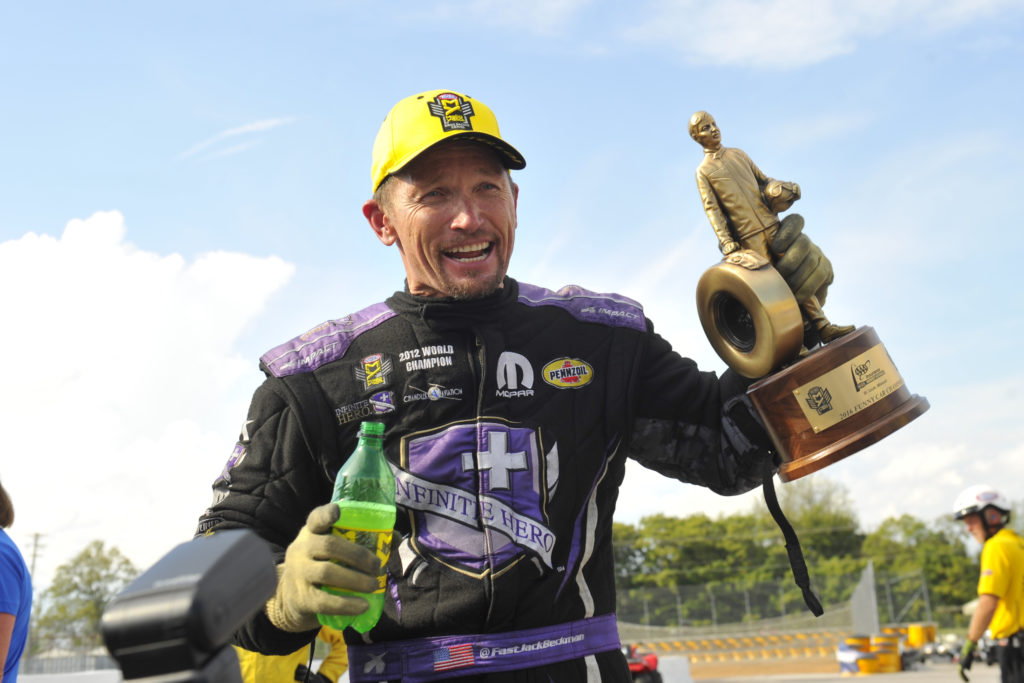 Tommy Johnson, Jr. posted his second consecutive final round in Funny Car and is now sitting second in the points, within striking distance of Capps, trailing by 48 points.

“You race all year to get into the Countdown to the Championship, and to start with two finals give us a lot of momentum and confidence,” said Johnson, who finished in the final round last weekend in Charlotte.  “We have a lot of fight in us, and that showed this weekend.  Moving from fourth to second in the points just really shows how bad we want this.”

The following is the unofficial NHRA Mello Yello points standings after the completion of the two NHRA Funny Car Countdown races. 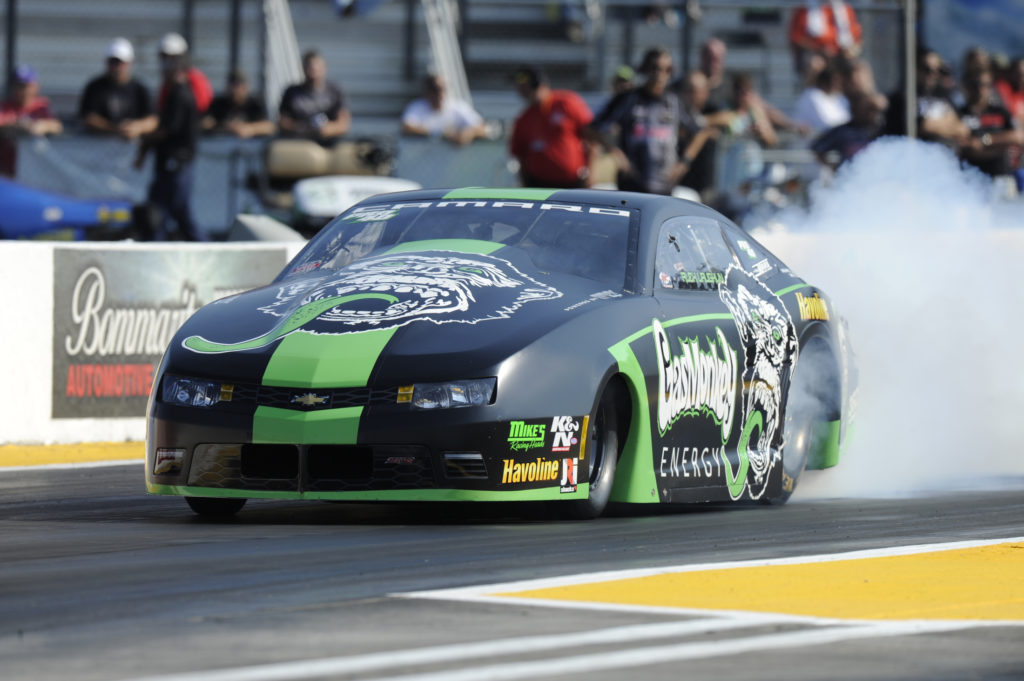 The most pleasant surprise of the day came in Pro Stock, with Alex Laughlin sprinting to his first career final round appearance and victory by powering his Gas Monkey Garage Chevy Camaro to a 6.611-second pass at 208.68 to outlast Butner’s 6.637 second elapsed time at 209.26 mph in his Camaro.  Laughlin, competing in only his second year in Pro Stock, did not qualify for the Countdown to the Championship.  He knocked down Seattle winner Aaron Strong, two-time 2016 runner-up Vincent Nobile and No. 1 qualifier Shane Gray before meeting Butner in the final.

“It’s an unbelievable feeling,” said Laughlin.  “It’s not even real at this point.  This has got to be a dream.  The whole day has been a blur.  Took it one round at a time and ended up coming up to the final.  I was a little nervous but took a couple deep breaths and told myself, ‘It’s just like any other round, just go up there and do your deal.’  As soon as I let the clutch out, I knew my crew chief gave me a good car.” 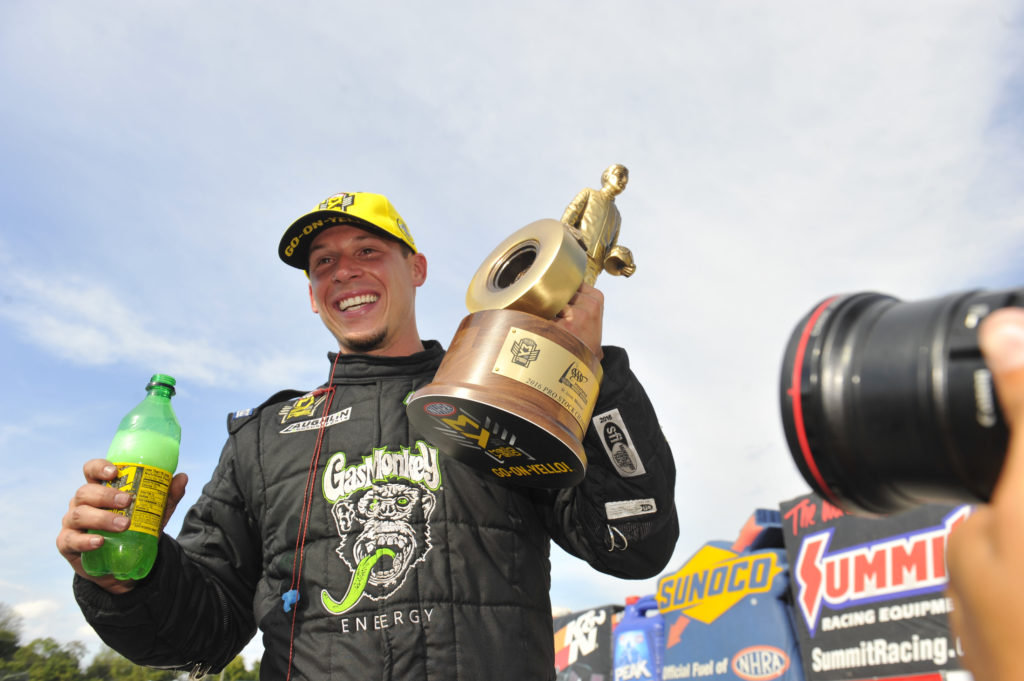 Butner, still pursuing his first career victory, earned his fifth runner-up finish of the season and sixth of his career with the performance.  He raced past Mark Hogan, Indianapolis winner Chris McGaha, and points leader Jason Line before losing to Laughlin in the final.  Butner improved to third in points with the runner-up finish.

Alligator farmer and Pro Stock Motorcycle racer Jerry Savoie rode to his first victory of 2016 with a 6.933 at 189.36 on his White Alligator Racing Suzuki, defeating Angelle Sampey’s 6.852 at 195.85 on her Star Racing Buell in an all-Louisiana final.  Sampey left the starting line early and red-lighted, giving Savoie the go-ahead victory.  Savoie, who had not won a race since 2015 in Dallas, tallied his fifth career win and second at St. Louis.  The victory moved Savoie up to fourth in the points standings.

“You go to the finals four times and win one, but out here the competition is so strong and it takes a little bit of luck,” said Savoie, who outlasted veteran Steve Johnson, Matt Smith and rookie Cory Reed in the earlier rounds.  “We got some luck in the finals.  Losing hurts so badly, but winning feels so good.  My team is a great team.  Our bike is really consistent and we’ve had some issues, but today was our day.” 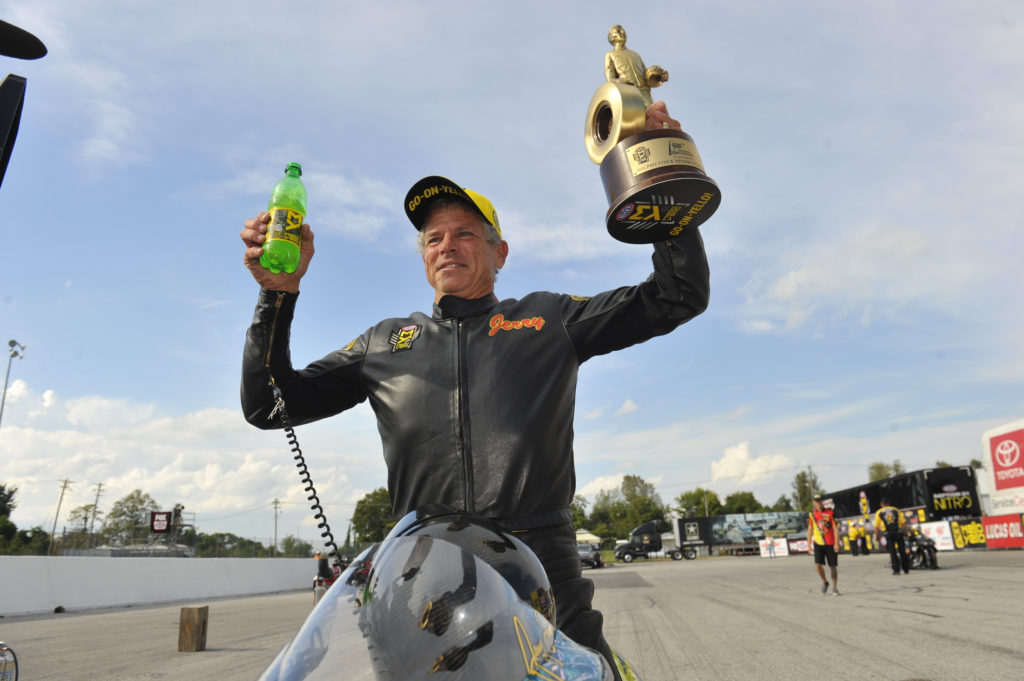 Sampey, who won for the first time since 2007 earlier this year in Englishtown, N.J., made her third final round appearance of the season by riding past Angie Smith, Hector Arana and Charlotte winner Chip Ellis.  She moved to second in points.

The NHRA Mello Yello Drag Racing Series will continue with the 21st event of the season and third of the Mello Yello Countdown to the Championship Sept. 29-Oct. 2 with the Dodge NHRA Nationals in Reading, Pa.