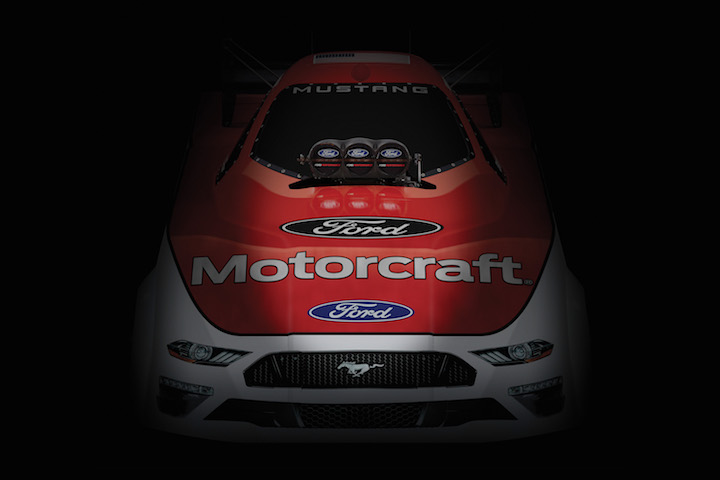 This year the family-owned company went for the jugular, as it returned to partner with Bob Tasca III in Funny Car nitro competition, dipping a toe back into Mello Yello competition. At this point there is only one Ford Mustang in NHRA Funny Car competition – Tasca’s – but the announcement that Ford Performance Motorsports is designing a new Mustang for 2019 competition is sure to catch the attention of other racers in the category.

Ford’s new global director for Ford Performance Motorsports, Mark Rushbrook made the announcement as the manufacturer celebrates Mustang’s 50th birthday, a weeklong commemoration of the original “pony” car. It’s been nearly a decade since Ford produced a new Mustang body; the most recent one came in 2009. The motorsports department’s designers and engineers are using some of the same technical tools they utilize for their NASCAR and IMSA Ford GT programs.

Emphasizing aerodynamic efficiency, “We’ll be applying all our advanced aerodynamic tools in the development of this new Mustang Funny Car,” Rushbrook said. “These are the same tools and resources: CFD, scale model and full-size wind tunnel testing we have used to develop the Ford GT race car and are using to develop the new Mustang for the Monster Energy NASCAR Cup Series.”

While he realizes a lot has changed since the 2009 Ford Mustang Funny Car body arrived, “We are confident we will be bringing a competitive car to the track next year.” Even though he has to wait another 10 months before bringing the new Mustang to the Christmas tree lights, Tasca is already fired up about the new design. Design plans have not been given to NHRA for its scrutiny yet. According to Ford sources, it’s still in early stages.

“I’ve seen some of the early aero numbers,” Tasca noted, “and it’s absolutely incredible how slippery the car is going to be on the race track. When you’re trying to find hundredths and thousandths of a second on a race run, having an aerodynamic piece like the Ford Performance engineers are giving us will make all the difference in the world.”

Tasca, who has earned four national event victories in his NHRA Funny Car career, has made it to the final round 11 times. The 2018 season is, for his Tasca Racing team, a learning year as they reconnect with this highly competitive class. Ford does have a true championship legacy in NHRA competition, having 238 overall events in Funny Car and 16 championships, most of them through the aegis of John Force Racing.

Ford’s 50th anniversary Mustang Cobra Jet competition car is getting into the action this year, with a limited production run of 68 cars available in either Race Red or Oxford White. The 2018 Ford Mustang Cobra Jet, capable of mid-8-second runs on the quarter-mile topping 150mph, is powered by a supercharged 5.2L Toyota V8, performance tuned by Ford Performance to give racers a proven and durable powertrain, the company said.