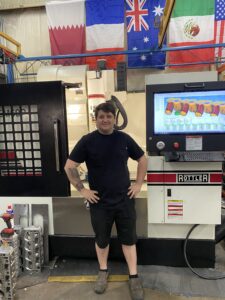 Borowski Race Engines, Inc. is known for building extraordinary engines for street, race and marine applications. Established in 1968, the firm has carved out a leading position in the high-end of the LS engine market and was was named Race Engine Builder of the Year by Engine Builder Magazine at PRI 2018. The talented builders and employees of Borowski, lead by owner Joe McCaul, are a huge key to Borowski’s success. Recently, lead technician Tim Zapp was promoted to Shop Manager. Zapp has been with Borowski since high school after demonstrating his prodigious engineering skill by building his first engine at the age of 14. RacingJunk spoke with Zapp about what this means for him professionally, as well as how his experience as a drag racer shapes his approach to engine building.

RacingJunk: First, congratulations on the promotion to Shop Manager at Borowski. That’s very exciting. How did you get started with the business?

Tim Zapp: I started originally working/helping my father with his engines and business.

RacingJunk: What does this promotion mean for your day to day, and thus for Borowski’s customers?

Tim Zapp: My day to day work has not changed too much. I am on the phone more now than before helping customers and vendors with projects and parts. This not only makes it easier for me to complete my daily duties, it also takes a little weight off of Ken and Joe’s shoulders. In turn, allowing them to focus all their attention on marketing and sales.

Tim Zapp: The biggest challenges with the type of engines we’re building usually, or for most people in the industry, are having parts on the shelf and the machines capable of such high standards. With all the inventory we have and the machining power, we are given a huge advantage over competitors. A lot of people assume that assembling an engine can be done with minimal tools and equipment. This isn’t even close to the truth when building engines of this caliber. We believe that all of our success has two big factors: one, we have equipped the shop with all new equipment that is computer controlled which keeps all the machine work to a very tight tolerance. Last, but certainly not least, we believe we’ve surrounded ourselves with some of the best talent in the industry. Our main goal in every engine we build is building it to withstand whatever the customers intentions are. ex: Drag Racing, Marine Racing, Endurance Racing, etc. And to always meet or exceed the customer’s power goals.

RacingJunk: We understand you’re a drag racer as well? What do you race and what are some of your goals as a racer? How does that effect your working knowledge of engines, as well as helping you manage the development of them/of the shop?

Tim Zapp: I currently have a 2009 GMC Canyon with an LS-based engine. It is currently undergoing a major transformation from the well-known, naturally aspirated 408cid engine to a forced induction setup. It has a  Borowski Race Engines 408cid with LS3 Heads, Callies Crank and Rods, Diamond Pistons, Precision 88mm Turbo, CID Intake Manifold, and Holley EFI engine management. This truck has helped me tremendously in my career. It continues to expand my knowledge of engines and EFI tuning. My main goal with racing is to, of course, go as fast as possible.

RacingJunk:  What is your favorite thing to go fast in?

Tim Zapp: I’d have to say my truck again. It’s a vehicle many people wouldn’t think twice about which makes it much more rewarding to drive/drag race.