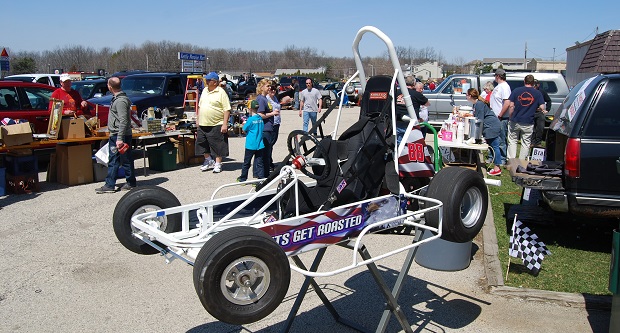 As might be expected, racing interest in the area is super high. In fact, that’s one reason the museum houses the South East Wisconsin Short Track Hall of Fame on its second floor. Wes Biswell was a local racer, and the Need for Speed Car Show held on April 16 in Slinger was created in his honor.

Wes was an avid racer, motor enthusiast and raced at Slinger Speedway for 25 years.  He passed away in February 2011 at 44 years old. The car show named after him is now in its sixth season and seems to be getting larger every year.  It features an outdoor vehicle display and indoor and outdoor swap meet spaces. Both the show area and the swap meet reflect racing interest.

Organizers of the early season car show and swap meet spoke of Biswell as “a guy lost too soon who loved working on cars, racing, family and friends.” Judging from the turnout at the annual show, Biswell’s passion for speed was well respected in the racing community.