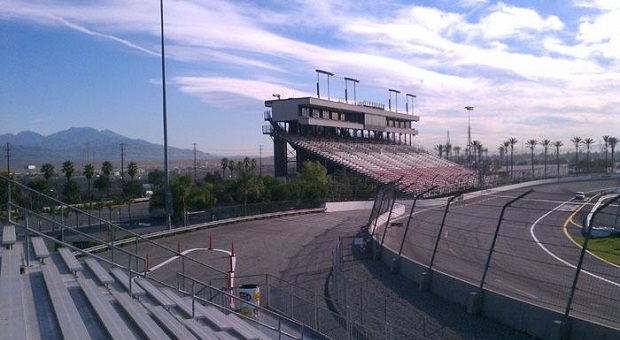 NASCAR Whelen All-American Series racing at Irwindale Speedway began its regular season Saturday. The track opened the 18th oval track racing season during March with two special events. Four series with a total of 45 cars, and five main events with 170 total laps were run in front of about 2,000 onlookers. The IS premier series, Pick Your Part Late Models, ran a pair of 18-car 30-lap features that opened and closed racing. Seidner’s Collision Centers Irwindale Race Trucks had nine trucks on hand for its season opener on the progressively-banked half-mile.

Irwindale Spec Late Models (called S-2 cars since their inception) are purpose-built by Racecar Factory in Irwindale a mile from the speedway. The former touring series booked all eight races this season at IS. Seven of the 16 RCF creations were present for the season opener. The No. 33 car was sidelined after an afternoon practice session crash inflicted heavy front-end damage.

INEX Legend Cars had 11 cars, scale replica Ford and Chevy 1930s coupes and sedans, present for race one. They opened racing with a six-lap trophy dash for the six slowest qualifiers with a fully inverted starting lineup. Austin Farr won. Legends later ran a 35-lap main event. The INEX Bandolero class opener was moved to Friday, April 21 during the 5:00-9:00 pm open practice session for all divisions.

LM TWIN 30s: Fastest qualifier Tim Huddleston, 20, started from pole position in the first 30 and led all 30 circuits. Nick Joanides, the March 11 50-lap race winner, started third, took second on lap 13 and trailed the 2015-16 series champion by half a straight (3.497 seconds) at the conclusion. Andrew Porter, 23, drove Joe Nava’s No. 88 Chevy team car of Joanides’ No. 77. He started second and finished third.

SECOND LM 30: The second main event starting positions had the top ten from the first feature inverted with P. 10-9 (McCray and rookie Jones in his second ever LM race) on the front row. First 30 winner Huddleston started tenth with P. 2 Joanides on his inside in the fifth row. As clean as the first main was the second race was the opposite. The race had two caution flags and damaged cars following several incidents.

On lap 4, Alec Martinez backed his No. 26 into the fourth turn crash-wall after contact. On the lap 4 green flag, P. 7 Joanides contacted P. 6 Jeff Williams’ No. 28 Ford, which spun wildly from the front straight through the infield grass and emerged at turn two. P. 8 Huddleston could not avoid Joanides’ slowing car. His car received front end damage that caused suspension damage and a major RF toe-out problem. Both Joanides and Huddleston drove to the pits for makeshift repairs. They returned to the back of the field.

With significant mechanical damage, both Joanides and Huddleston just drove laps near the back to collect as many points as possible. On lap 15 Williams’ Ford blew its engine entering turn one and exited to the infield. Only 15 of 18 starter finished the 29-minute race. Huddleston finished ninth and Joanides tenth

The half-inverted field resulted in entertaining battles throughout the second 30. Racing Director Mike Atkinson said the second 30 in twin-30 events will be inverted by eight or ten cars all season based on the finish of the first 30.

Vargas, a fast-improving contender from La Mirada, started seventh and raced by McCray for third on the lap 15 restart following Williams’ engine detonation. Vargas took second from Helgeson on lap 18 and battled outside-running Porter closely during the final ten laps. He was half a length from the lead on lap 25, but trailed Porter by 0.209 at the finish.

The top three—Porter, Vargas and Helgeson—comprised a surprising late model podium trio. It was the first ride for Porter in the Nava No. 88 and the first time he crossed the finish line first in a late model. He has two S2 car feature wins and one in trucks on the half-mile. Second place was the career-best late model finish by one position for Vargas, the IS 2013 INEX Bandolero champion. Helgeson enjoyed his first late model podium. Porter thanked Vargas for racing him cleanly; he also thanked his crew chief Ryan Partridge on the pit microphone. 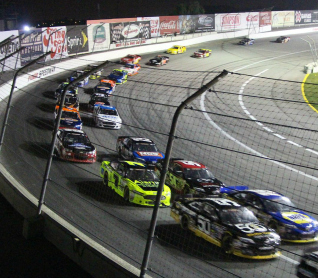 TECH INSPECTION: The usual top three finishers from both 30-lap mains tech inspection in the pit garage had engines checked and pumped to test for legality. A problem was found with Porter’s No. 88. The usual car engine had a broke piston during Friday night practice. The team borrowed the sealed 602 GM crate engine from Porter’s No. 7 IRT to race Saturday. It performed well.

However, the IS racing director on Sunday announced that the No. 88 car driven by Porter was being “placed last in the official finish of race two for use of a non-conforming part.” All other cars were elevated one position. That directive gave impressive second year late model driver Vargas his first official late model feature victory. It also gave him the series point lead by six points (140-134) over 2015-16 series champion Huddleston after three races. Joanides and Garner are tied for third place with 132 points.

The top ten in the official finish of the second 30 is: Vargas, Helgeson, Garner, and Jagger Jones, son of P. J. Jones (who was present after racing at the Long Beach GP Saturday in Robby Gordon’s Stadium Super Trucks Series). The 14-year old grandson of 1963 Indy 500 winner Parnelli Jones finished ninth in his only other late model start at IS four weeks ago. McCray, L. Alan, George Atkinson, Huddleston, Joanides, and rookie Matt Johnson completed the top ten. All finishers completed 30 laps.

A lap three crash in the second turn near the crash-wall involved the brothers McNeil. Lucas’ No. 78 was towed to the pits. Jacob’s No. 97 drove to the pits and returned for the restart minus the hood and front fenders. He spun later and completed only five laps. Cantrell ran the fastest lap at 89.919 mph.

SPEC LM 35: After starting last, Robby Hornsby, the winner of three of six feature at IS last season, dominated again. The Yucaipa resident started sixth and drove through the field carefully. He passed laps 1-13 leader Todd Conrad and led laps 14-35. He won by 1.533 over Conrad. Ed Cutler, Chris Yeaton, rookie David Hibbard, from Medford, Ore., completed all 35 laps in that order. Robert Arevalo dropped out on lap 13.

The 15-minute race had three yellow flags and one red. On lap 3 three cars tangled low in the second turn. The P. 6 and 7 cars were stopped and P. 8 Denis Meyer, a newcomer from Encinitas, rode over a wheel of a spun car, He flipped his No. 0 sedan one and a half times towards the outer wall. The car landed on its side. Meyer emerged without serious injury.