The new NASCAR low down force package proved to be the right combination at the FireKeepers Casino 400 at Michigan International Speedway, offering up plenty of passing and great racing from the normal follow-the-leader pattern.  The restarts were wild with cars going up to five wide, all looking for track position and if you could make the right move, you could keep it, for a while.

Joey Logano finally punched his ticket into the Chase of the Championship, blasting through the pack for his first Sprint Cup win in 2016 at MIS.  He was on an 18-race winless streak since last coming home victorious at Talladega in October.

Logano had plenty of incentive for his 15th Sprint Cup win with Ford Motor Company’s head chief, Edsel Ford sitting atop his pit box and he certainly appreciated producing for Ford and his legendary car owner, Roger Penske in his own backyard.  He becomes the 10th different winner this year leading the race for 138 laps.

“First off, I didn’t win, we won as a team,” said a smiling Logano.  “You know, it was an amazing team effort from Friday or when we unloaded with this rules package.  You don’t know what you’re up against when you barrel down into Turn 1 the first time, and you say, oh, my God, they weren’t kidding about that small spoiler on the back of it.  Everyone started working on the car, able to put the thing on the pole to start the race and be able to stay up in the top two the whole race.  It feels good to be able to do that.  When you lead that many laps, it’s more of a relief when you win than anything because you feel like you’re supposed to when you have a car that good. 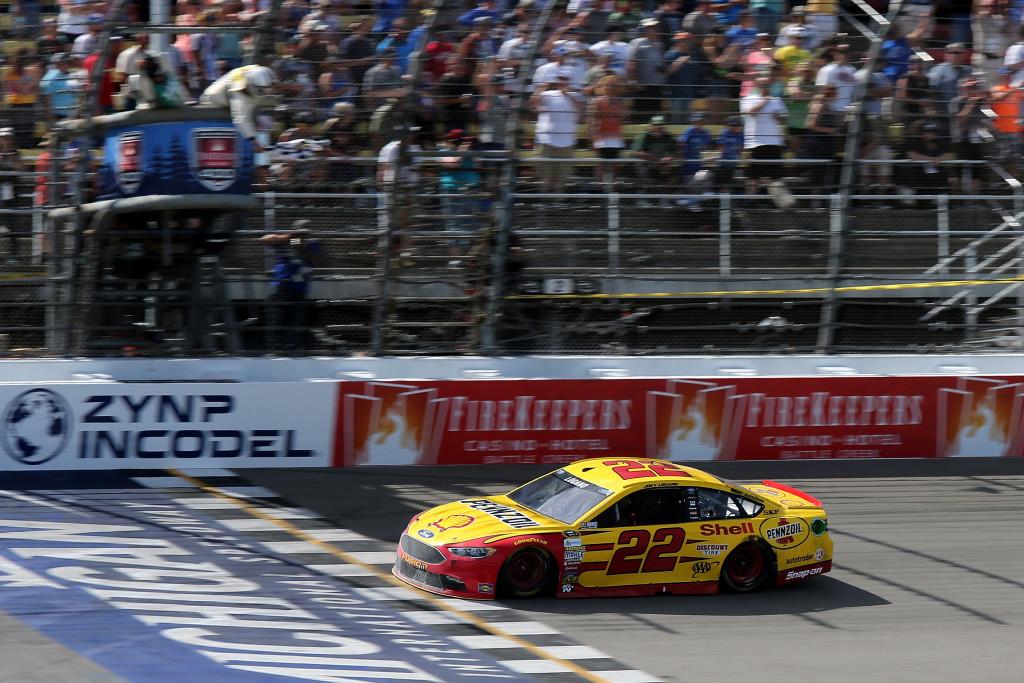 From all appearances it looked like the changing of the new guard in NASCAR is taking charge proving themselves weekend after weekend and again Chase Elliott put himself in the right where he wanted to be, only having to ease off the gas pedal not getting all the fuel allotment he needed to pursue Logano finishing second.

“I had another fantastic car,” said a disappointed Elliott.  “My guys have been doing a really good job the past few weeks, and we’ve been just trying to give it all we can get to get one of these things.  Had another fantastic opportunity today and I feel like I definitely messed that one up for my guys.  You can’t do dumb stuff and expect to win.  That’s just the way life is.  That’s certainly the way this sport is, and I did dumb stuff today, so can’t expect to win.

The average age of the top three of the Michigan finishers is 22 years old and Kyle Larson was right in the mix from the beginning, hanging around the top all day to finish third.

It was a solid run for us,” said a determined Larson.  “We’ve been consistent as we’ve been in the last year and a half, so it’s nice to be running up front and getting closer to a win.  Still got some work to do, but it is nice when we can get a package like this thrown at us just a few weeks before the race, and our guys at the shop and here at the racetrack can look at engineering data and come up with a good piece.  When you put together the combination of a superspeedway with a NASCAR Xfinity race the normal outcome would equal Kyle Busch in the winner’s circle and it appeared that way up until the last lap.

The Sprint Cup series is off next weekend and resumes in two weeks at Sonoma. 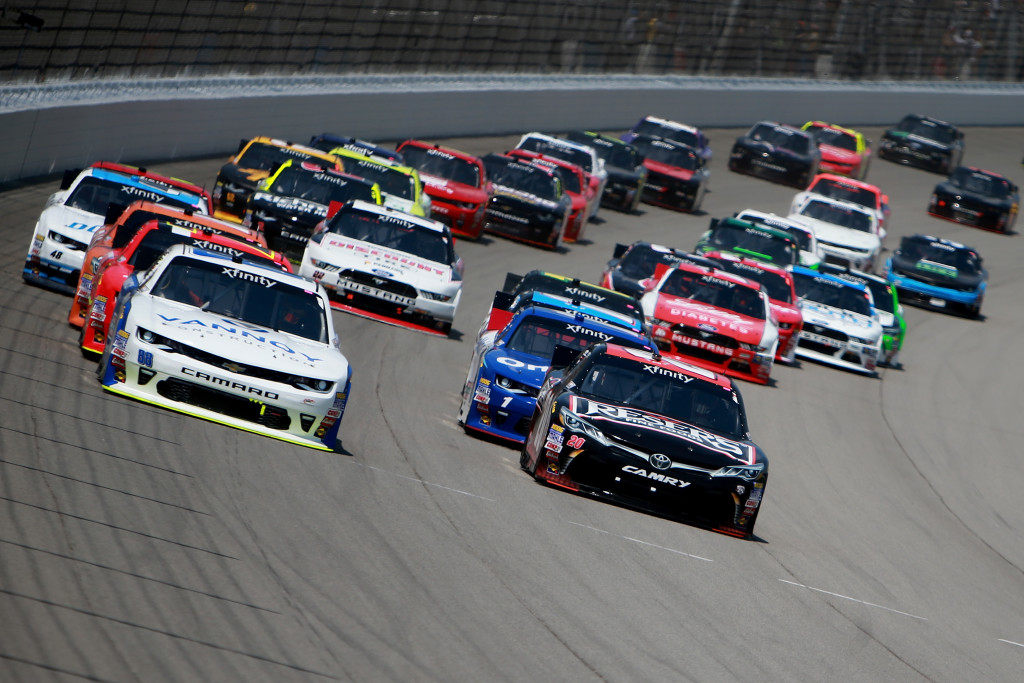 Daniel Suarez, driving for Kyle Busch Motorsports, put away his previous pitfalls using all that knowledge to beat Busch fair and square, taking the lead on the white flag lap for his very first NASCAR Xfinity victory at Michigan International Speedway for the Menard’s 250.  Despite an early pit road speeding penalty, Suarez fought back and drove through the field to become NASCAR’s sixth different foreign-born driver to win in the Xfinity series and first from Mexico in addition to being the first on an oval.

“I don’t think I can speak English or Spanish right now.  I have no words for what I’m feeling right now,” Suarez said.

Kyle Busch was pleased with his overall run leading for 88 of the 125 laps.  Finishing second to a teammate is a little bittersweet as a competitor.

“The Kyle Busch School of Charm finished 1-2-4 today, so not too bad,” said Busch of his KBM teams.  “Obviously we want to win.  We thought we should have won.  We had the best car for the majority of the race there, but not the last 20 laps or so—just got really loose on me.” 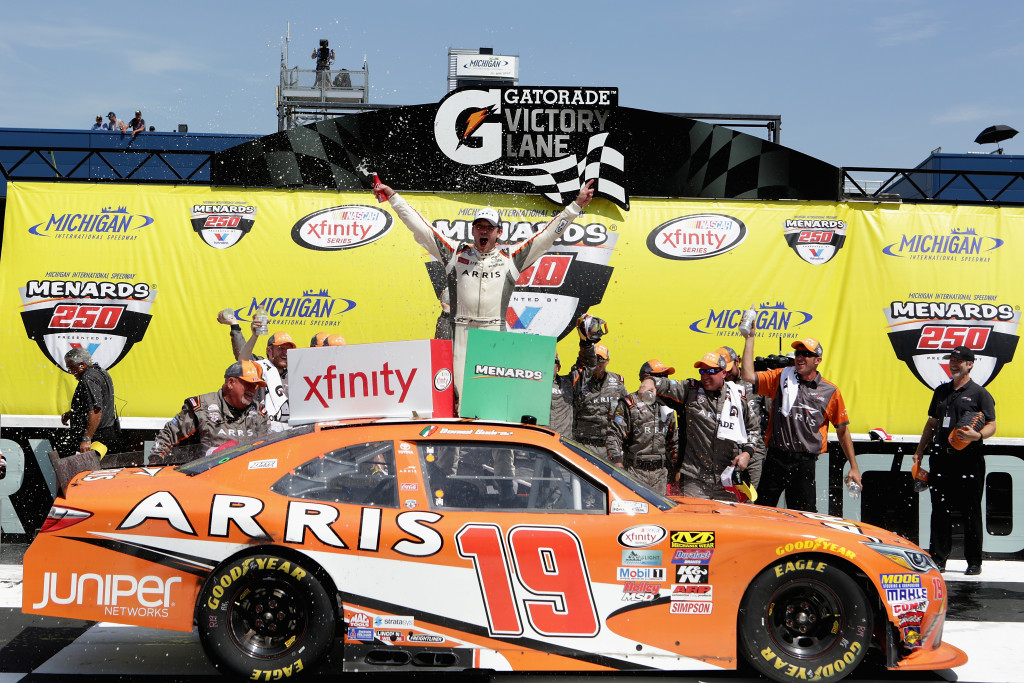 Erik Jones drove with a heavy heart on Saturday after his father, Dave passed away last Tuesday.  He finished fourth and as an appropriate gesture, replaced his name on over the driver’s door to ‘Dave’ for the race.

The Sprint Cup teams are off next weekend preparing for Sonoma and the Xfinity series will venture onward to Iowa Speedway for a Sunday afternoon showdown. 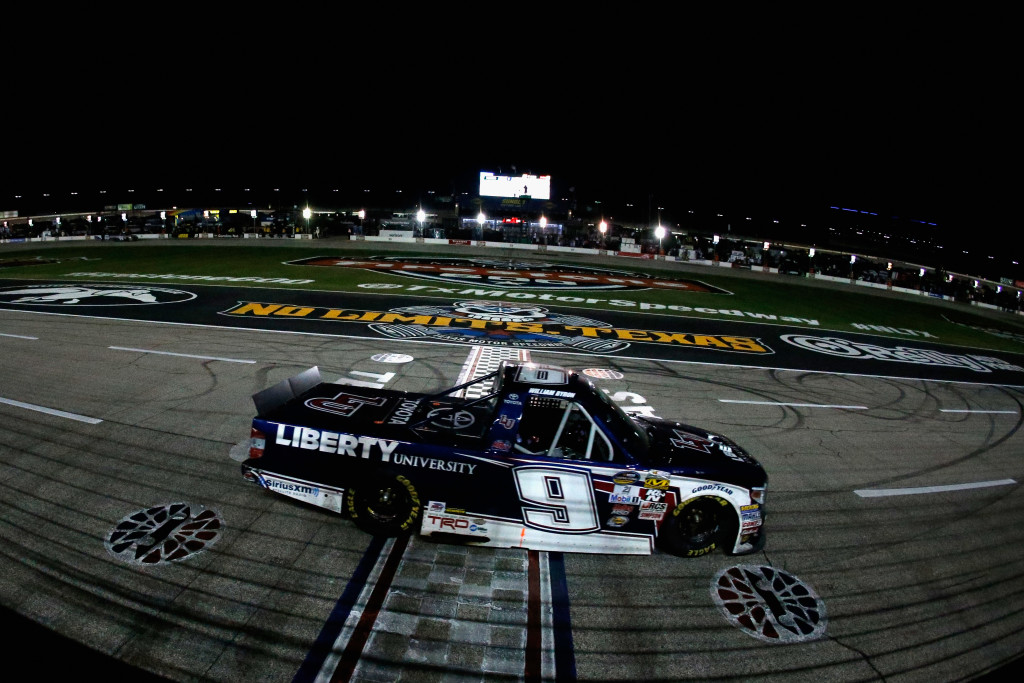 On Friday night at Texas Motor Speedway, the NASCAR Camping World Truck series showed why two-time champion Matt Crafton is such a great driver leading for 134 of 167 laps of the Rattlesnake 400K.  Even despite cutting a tire early in the race, it looked like he was going to sail away until five laps to go when the tandem of William Bryon and Rico Abreu went flying by Crafton to do battle among their trucks.  Abreu charging a little too hard on the white flag lap went rim riding sending Byron onward to victory lane for his second win of the season returning Crafton back to the runner up spot.  Abreu finished ninth.

The Trucks race next in Iowa for a Saturday night shootout.