As the guys and gals of NASCAR planned to leave what happened in Vegas in the confines of Sin City, many loyal fans were sure to be on their edge of their seats to find out if the temperatures would be the only thing heating up at Phoenix International Raceway this weekend.

The NASCAR XFINITY Series finally received a welcome change this weekend as many Monster Energy NASCAR Cup Series drivers sat out the DC Solar 200 at Phoenix International Raceway. This gave the young, up-and-coming drivers of this secondary series the opportunity to showcase their talent. The first to have this opportunity would be 19-year-old William Byron, who picked up his first pole of the 2017 season on Saturday.

Despite having one of the top performing JR Motorsports Chevrolet’s in the field, Byron was unable to hold onto his first-place start following the start of this race. As Byron fell to the back of the field, XFINITY Series veteran Erik Jones took his race lead to a Stage 1 win. It wouldn’t be long before the second-place starter would also lose his lead, missing out on a second Stage win to current Monster Energy NASCAR Cup Series driver Ryan Blaney.

The lead changes would continue to heat up as the laps wound down. Following a caution with four laps remaining, fellow Jr. Motorsports driver Justin Allgaier would not only take the lead, but the checkers in the first Dash 4 Cash XFINITY race of the 2017 season. 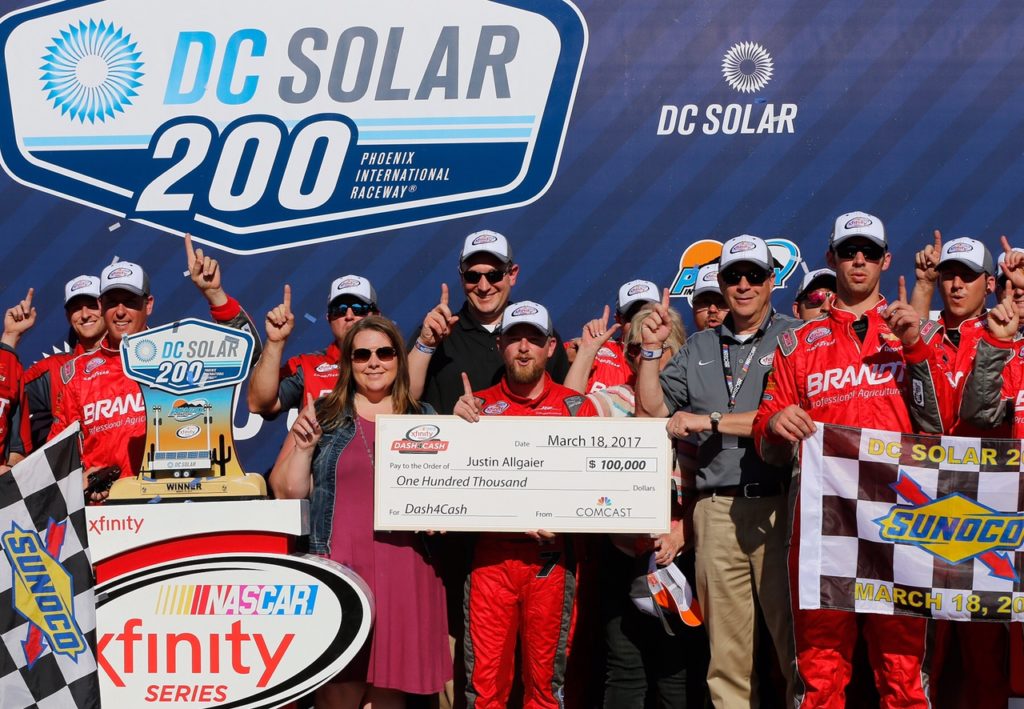 Along with securing their first win of the season and a $100,000 check for the winning driver, Jr. Motorsports also picked up three top five finishes as well as four top 10’s.

“This was a total team effort,” said Allgaier. “We had four really good JR Motorsports hot rods out there today.”

Much like the end of the Monster Energy Cup Series race in Vegas, Allgaier’s win would be overshadowed by a dispute by two other drivers. The last 10 laps of the race led to a battle between the No. 00 of Cole Custer and No. 2 of Austin Dillon. Custer would ultimately lose control and send the Richard Childress Racing driver slamming hard into the outside retaining wall.

Dillon would return the favor by slamming Custer into the outside retaining wall during the caution flag on lap 191. This on-track argument would earn Dillon and his crew chief Justin Alexander a trip to the NASCAR hauler.

Guess we will have to wait to see if this driver discussion turns into anything more at Auto Club Speedway next week. 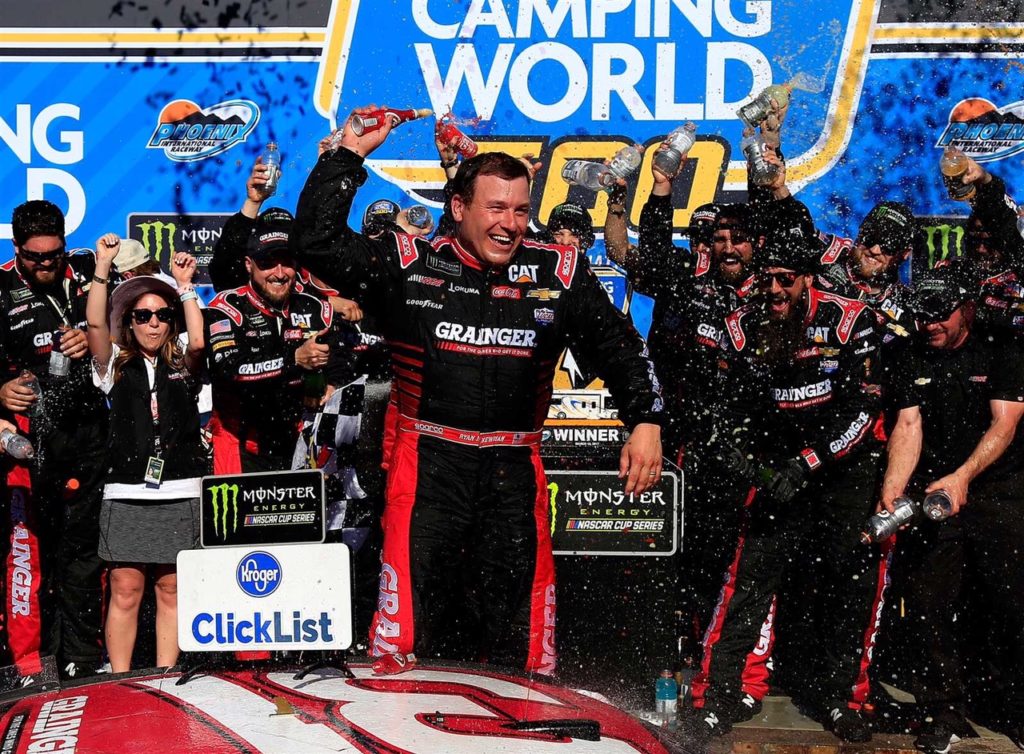 The wave of the green flag in Sunday’s Camping World 500 race would both signal the roar of 39 Monster Energy NASCAR Cup Series on the blistering hot surface of Phoenix International Raceway and put fans on the edge of their seats, wondering if both Kyle Busch and Joey Logano were really going to leave well enough alone after last week’s battle in the pits at Vegas.

As the laps wound down in this race, it appeared that Phoenix heat could claim the proverbial victory in this 312-lap race, but it wouldn’t be the heat that some fans were expecting. In fact, most drivers decided that the ‘have at it boys’ rule didn’t need to apply at this race, which only led to eight caution flags flying during this race.

It was the one late race caution flag that flew to give both Richard Childress Racing and its No. 31 team of Ryan Newman their first victory since 2013. After choosing to stay out on old tires for a two-lap overtime period, Newman pulled away when the No. 17 of Ricky Stenhouse, Jr. and the No. 42 of Kyle Larson got together in the first corner of this one mile track after the final restart on Lap 313.

Newman’s 18th career victory was his second at Phoenix but his first since he won the Brickyard 400 on July 28, 2013, driving for Stewart-Haas Racing.

“I’ve lost count — that’s how long it’s been,” said Newman. “What a gutsy call by (crew chief) Luke (Lambert). I called for two tires, and he called for none. I have won more races with no tires than I have with four.

“I’m just proud of these guys. We had a good car all day and we kept it out of trouble to collect the win in the end!”

Although Newman’s late race tires would hold up to the blistering raceway, Joey Logano would once again find trouble during the final laps of this race after a blown front tire, due to a melted bead, sent his No. 22 Ford into the Turn 1 wall to cause the eighth and final restart of the afternoon. The most ironic part was that with little effort, Logano’s crash would once again ruin the day for the No. 18 of Kyle Busch. While making his march to Victory Lane, Busch would be forced to restart fifth for the final two-lap run. After being bottled up behind Kyle Larson and Ricky Stenhouse, Jr. Busch would have to settle for a third-place finish. 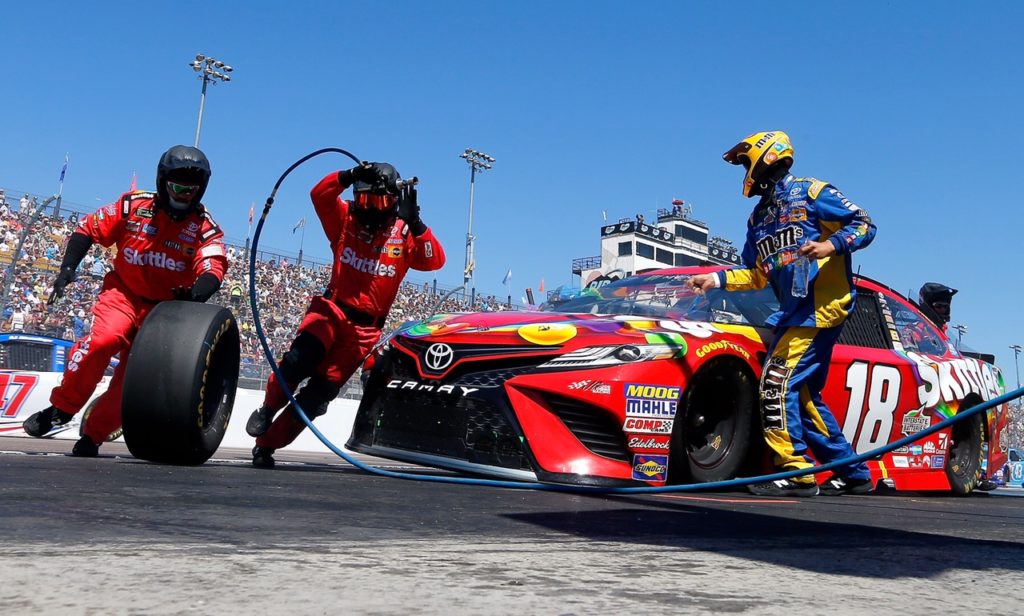 After being told that the final caution flag was being shown due to Logano, Busch couldn’t help but wonder if there was some kind of conspiracy still brewing between these two drivers.

“Right on time,” Busch said sarcastically, after the yellow flag was displayed with five laps left in this race. “We really needed the outside like Larson had,” Busch said after the race. “Overall, we should be proud of our run today and we will move on.”

Both the NASCAR XFINITY and Monster Energy Cup Series will make their treks to Auto Club Speedway. RacingJunk.com will be sure to bring you all the action from the two mile speedway in Fontana, CA. Stay tuned!