Now that the NHRA Mello Yello series’ fields are set, it comes down to the six races that will determine a champion; and it starts this weekend at the zMAX Dragway in Charlotte.  We’ve hit the Countdown, with the Top 10 spread out over a 110 point gap with the leader having a 30-point separation over the field.

Even before the first flash of green in the race, there’ve been plenty of rumblings in the background. The biggest of which is the roller-coaster ride Shawn Langdon has been on in the past week.

First, he pulled off a major upset, beating U.S. Nationals No. 1 qualifier Tony Schumacher at Indy after qualifying 16th.  Then, Langdon advanced to the semi-finals before bowing to Dave Connolly, putting his Alan Johnson Racing team solidly in the No. 6 position in the Countdown.

But on Tuesday of this week, AJR announced its withdrawal from the Countdown, due to sponsorship challenges.  Then on Wednesday, Don Schumacher Racing revealed that Langdon was on board as an “on-loan” driver and would be competing for yet another championship after winning his first in 2013.  He will now take over the helm of the Red Fuel Powered by Schumacher/Sandvik Coromant Top Fuel dragster and he couldn’t be any happier.

“After everything happened, there was an opportunity to race with Don Schumacher Racing to finish the season,” Langdon said.  “It’s a unique opportunity, but I think it’s a good fit for everyone at DSR as well as for Alan and me.  I am still under contract with Alan Johnson Racing, and we are still working towards getting our team back together in 2016.  But for the next six races, I’ll be driving for Don Schumacher Racing and competing for a championship.  It’s great for the fans to be able to have 10 cars competing for the Mello Yello championship, it’s good for NHRA, and at this point, I think it’s good for everybody.”

Another Top Fuel candidate, J.R. Todd, who finished in the runner up spot last year, is turning up the volume, aligning his Kalitta Racing team with the Jimi Hendrix Foundation for the next three NHRA events.

“What an awesome way to start our chase at the title,” said Todd.  “Hendrix was an amazing musician and I am excited to be able to represent this foundation and educate people on the Music for Life program.

“Charlotte has been a good track for us in the past and I’m looking forward to getting there and kicking off the countdown.  It would be great to come out of there with a win to start our march toward the championship.  It’s also a big weekend for us as we unveil the Jimi Hendrix Foundation car and there’s no better way to raise awareness for them than going out and winning.”

The Jimi Hendrix Foundation is dedicated to the betterment of the world community through music.  In honor of the love and giving spirit of Jimi Hendrix, the Foundation works to improve the quality of life for children and the world and to inspire creativity in music, arts and sciences.  The partnership with Kalitta Motorsports and J.R. Todd will allow the Jimi Hendrix Foundation to showcase their Music for Life program providing children and young adults with musical instruments and instruction without the worry of cost.

Another long standing favorite and teammate to Todd, Doug Kalitta, will be competing in his 18th NHRA title bout after being the runner up three times (2003-04, 2006).

“My crew chief Jim O [Oberhofer] has won a couple of Top Fuel championships and we are all really hungry,” said Kalitta, who has advanced to the Countdown to the Championship for the eighth straight year.  “Hopefully this will be the year it all comes together.”

Of course, eight-time Top Fuel Champion Tony Schumacher will back in the hunt, defending his championship with the vigor of the U.S. Army.

“This one will be the hardest because we won last year and doing it back to back is incredibly tough”, said Schumacher, Top Fuel’s most prolific driver with 76 wins.  “It takes a lot of right-time, right-place moments and, when you have the bull’s-eye on your back, people take their best shots.  It’s going to be fun.  I love the moment.  I love the fight and I love going into the fight being surrounded by great people.  Whether we win it or come up short at the end of the season, being part of it all is the gift itself.  We’re excited to give it everything we’ve got.”

Funny Car fan favorite and 16-time NHRA World Champion John Force saw all the hoopla surrounding Jeff Gordon’s last year on the Sprint Cup tour and decided in the heart of NASCAR country to join in honoring his long standing friend with a tribute car decorated with his famous No. 24 livery along with the patented Force flames in his honor.  It’s the best way he knows how to say thanks to his fellow Chevrolet driver. 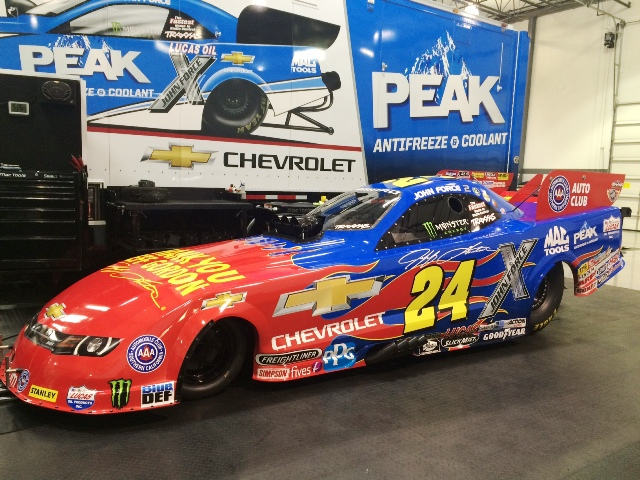 “This special Chevy Funny Car is just a way for me, my family, my team, my sponsors, NHRA and the fans to say thank you for being a great champion and being such a great driver in NASCAR,” said the 143-time race winner, Force.  “I put as many flames as could fit on my hot rod in Jeff’s honor.”

Looking ahead, Jack Beckman is the man to watch in Funny Car.  It won’t be easy to chase down the red-hot Beckman, who has a super-fast race car and six wins in 2015, but defending Funny Car champion Matt Hagan will take confidence into the Countdown knowing he started the playoffs in sixth to win his first world championship and seventh a year ago.

“Charlotte has always been a pretty kind track to us and hopefully that will continue,” said Hagan, who won last year’s playoff opener and has two other career wins at zMAX Dragway.  “The Countdown is chaotic.  You have six races to make it happen and you never know how it’s going to turn out.  I know what it’s like to dig myself up to that No. 1 spot.  You just have to depend on your guys and have trust in what you’re doing.”

Speaking of Beckman, the Infinite Hero team gained more momentum over Labor Day Weekend when it swept the U.S. Nationals by winning the pole, event title and the $100,000 Traxxas Shootout for Funny Cars.

“I think what happens is, when everything is going well, doing your job right is actually easier.  I think the results can oftentimes drive the attitude.  But I don’t think you’re ever going to start getting good results unless you have the right attitude to drive that.  So I think that even when things were horrible in 2014 – one final round, no wins – I still think I kept a good attitude.  The 11 of us on this Infinite Hero team are doing enough things correctly; we are blending with each other.  The chemistry on the team is fantastic.  There are 11 people that equally share in the tasks and should equally share in the results of this.  I think because of that, I don’t see any reason why this can’t continue for six more races.”

Pro Stock is a real donnybrook between defending champ Erica Enders-Stevens and Greg Anderson as her closest opponent.  But let’s make it very clear, it’s not only those two that have their eyes set on the target for the sports’ top honor as champion.  Oh, no, you can’t discount Chris McGaha, Jason Line, Allen Johnson, Larry Morgan, the Gray brothers of Shane and Jonathan as real contenders.  Dark horse runners would be rookie, Drew Skillman and Vincent Nobile.  Both are stout leavers and could play a bigger role by the time the series heads to Pomona.

“We still have a ton of work cut out for us going into the Countdown,” said Enders winning six times in 2015.  “We weren’t the fastest car at Indy, but you bet your butt our guys are back in the shop working on that to see if we can find some more horsepower and get our act together for the Countdown.”

Greg Anderson is the most improved driver in the class, winning four times after recovering from heart surgery the year before and missing the Countdown.

“We’re happy.  We’ve made progress over the summer, and we’re starting to peak at the right time as far as performance goes,” said Anderson, who was the No. 1 qualifier at the U.S. Nationals in Indianapolis two weeks ago.  “That’s very important.  You have to have that great performance if you want to win, and we’re there.  We’re ready to go to battle, and we’re not easing into this thing.  We’ve used all of the available hours in the last week, and hopefully we’ll start out the Countdown with a big victory.