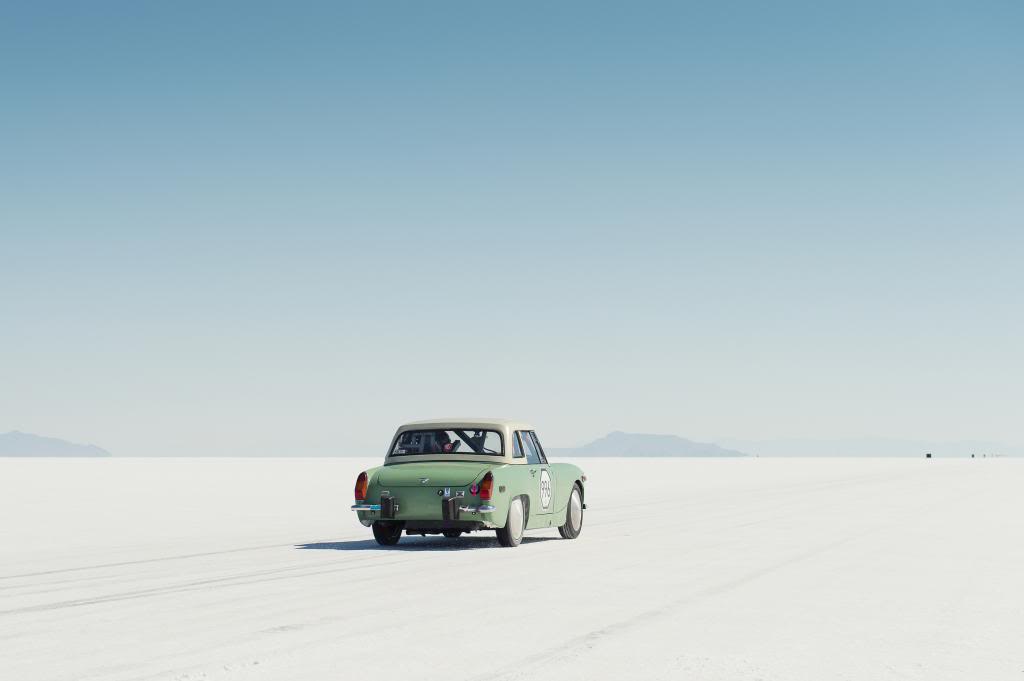 Rarely is the tiny MG Midget thought of as a record-breaking racing car. However, on Sept, 7, 2014, Milwaukee Midget Racing established a new Bonneville course record of 122.539 mph for the I/GT class which had held the same unbeaten record for 22 years.

Through continued work and racing development, it is Milwaukee Midget Racing’s intent to keep and maintain class dominance at Bonneville in the I/GT class for one-liter stock-bodied sports cars. The Milwaukee Midget team is committed to defending its title against all comers and maintaining MG’s presence as both a historic and relevant marque in Land Speed Racing.

The team noted that the MG has been involved in land speed record attempts since 1930 and has an 84-year history of performance. The company’s famous slogan “Safety Fast” comes from its successful racing history.

On Aug. 23, 1957 Sir Stirling Moss piloted the factory backed MG EX181 streamliner to a two-way average speed in excess of 245 MPH. Moss set a total of 10 speed records (five international and five American) behind the wheel of the EX181, which still exists. But some of Moss’s records didn’t last long.

In 1959, racing driver Phil Hill drove a factory-backed MG streamliner over the Bonneville Salt Flats to a class record of 254.91 mph, eclipsing Moss’s title as the fastest MG driver in the world.

In 1997, the MG Rover Group approached the famous So-Cal Speed Shop with the concept of taking an MGF-based streamliner called the EXF (later called EX253) to Bonneville. In wind tunnel testing, it was found the car could do 255 mph, but the realities of racing on salt were different. California Rover dealer mechanic Terry Kilbourne drove the car and his first run was 168 mph, but he then made two 183-mph runs, followed by 195 mp and then 217.4 mph one way. His two-way average came in at 215 mph—enough to join the Red Hat Club.

In 2003, the MG Rover Group again contacted the So-Cal Speed Shop in California for a joint effort to race a Rover wagon at Bonneville. After Speedweeks, the MG Rover group applied to the Guinness World Records for the “World’s Fastest Estate car/Station Wagon” record. The MG ZT-T, code named X-15, reached a top speed of 225.609 mph (360.9 km/h) at the 55th annual Bonneville Speed Week Nationals, on the Salt Flats in Utah.

It seems that MG Rover has lost interest in Bonneville since 2003. Terry Kilbourne now runs a company called Techspeed Racing.  The whereabouts of EX253 are unknown. A second V-8 powered streamliner code named EX255 that never got to run at Bonneville sits in a darkened area of Longbridge, England covered in dust. So, it is up to Milwaukee Midgets to keep the MG presence at Bonneville alive, and Chris Conrad is up for the task.