The fifth race in the 2017 NHRA Mello Yello Drag Racing Series Countdown to the Championship battle gave a Top Fuel veteran his first win of the 2017 season, while two championship contenders found their way back to Winner’s Circle at the 17th annual NHRA Toyota Nationals at The Strip at Las Vegas Motor Speedway. 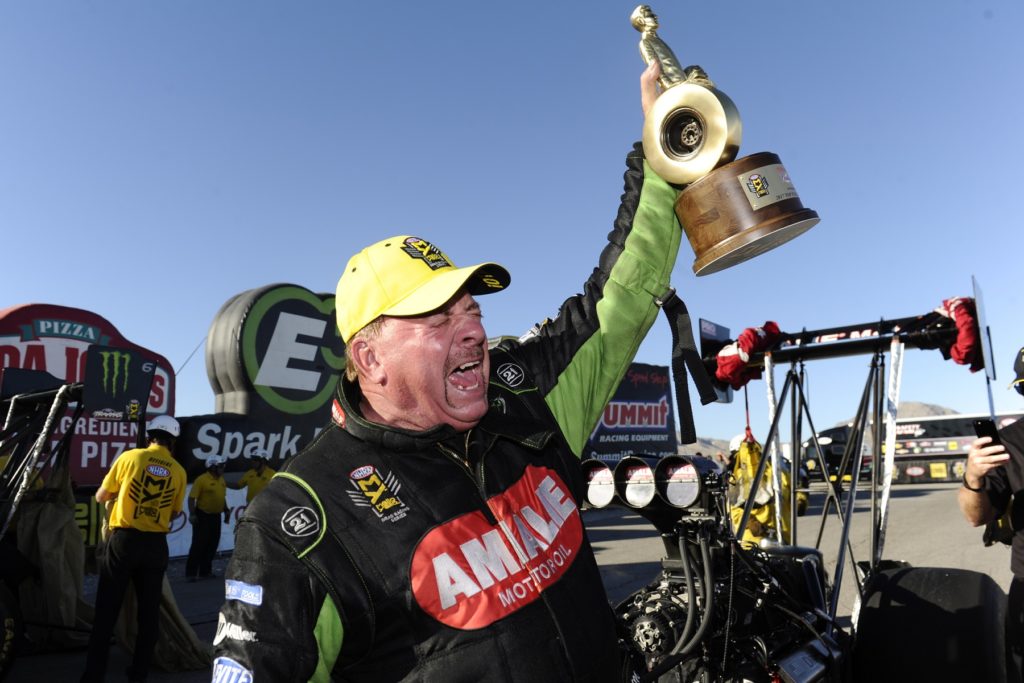 On his way to his first victory of the season, Top Fuel veteran Terry McMillen defeated Richie Crampton, Clay Millican and Shawn Langdon on his way to face the daughter of legendary Funny Car driver John Force in Sunday’s final elimination round.

While Brittany Force had an impressive performance in Las Vegas, after taking down Shawn Reed, Doug Kalitta and Leah Pritchett, the Top Fuel femme fatale red-lit in the final round to hand the victory to her challenger for McMillen’s 104th Top Fuel win.

“This is the stuff you dream of as a small kid,” said McMillen. “To have the opportunity to go out there and get this win is truly an amazing feeling. The car was really quick on the starting line, lights were good and it all just fell into place.”

Despite falling flat at Las Vegas Motor Speedway, Force remains second in points, behind Steve Torrence, heading into the final event of the season. 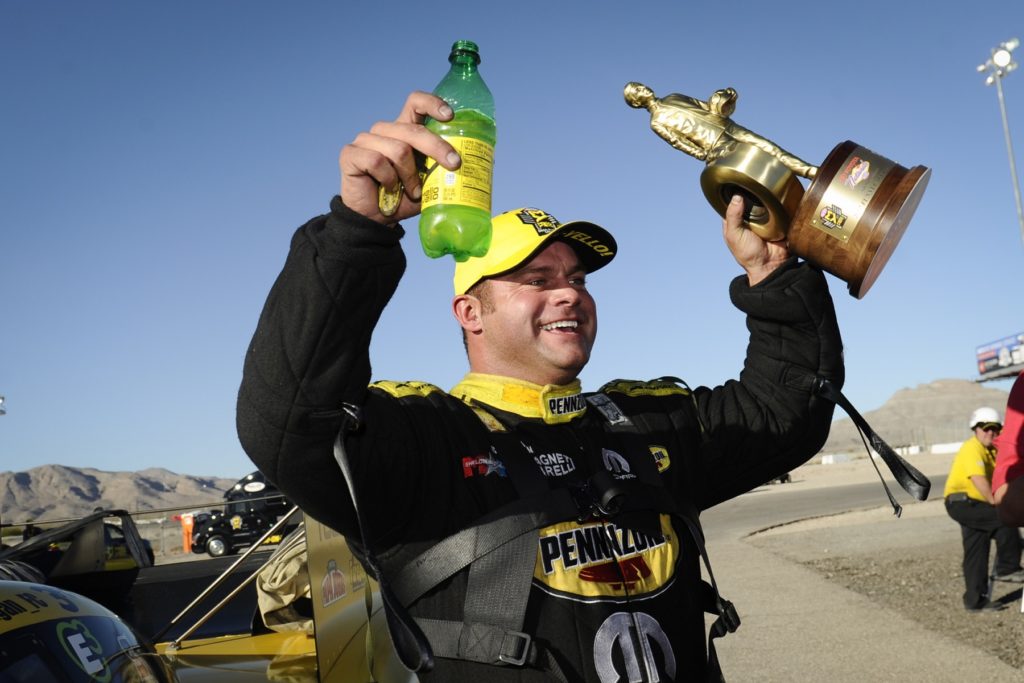 Although the Top Fuel series landed a veteran driver on the Winner’s Circle podium for the first time this season, Funny Car veteran Matt Hagan would return to a very familiar place at the 17th annual NHRA Toyota Nationals.

His route to the Funny Car victory podium included win lights against Gary Densham, Del Worsham and his Don Schumacher Racing teammate Jack Beckman before also facing a Force of NHRA nature in the final elimination round. Despite Courtney Force’s 4.020-second pass at 320.05 MPH in her Advance Auto Parts Chevrolet Camaro, Hagan powered his Pennzoil Dodge Charger R/T to his first career victory at The Strip at Las Vegas Motor Speedway after a run of 3.942-seconds at 329.42 MPH.

“The feeling of winning is a fix that you can’t anywhere else,” said Hagan. “My guys busted tail all weekend and we had a car that went down the track every run we have been here. I was just trying not to mess up a good thing.”

Despite this win, Hagan continues to sit fifth in the Funny Car point standings going into the final Championship round. 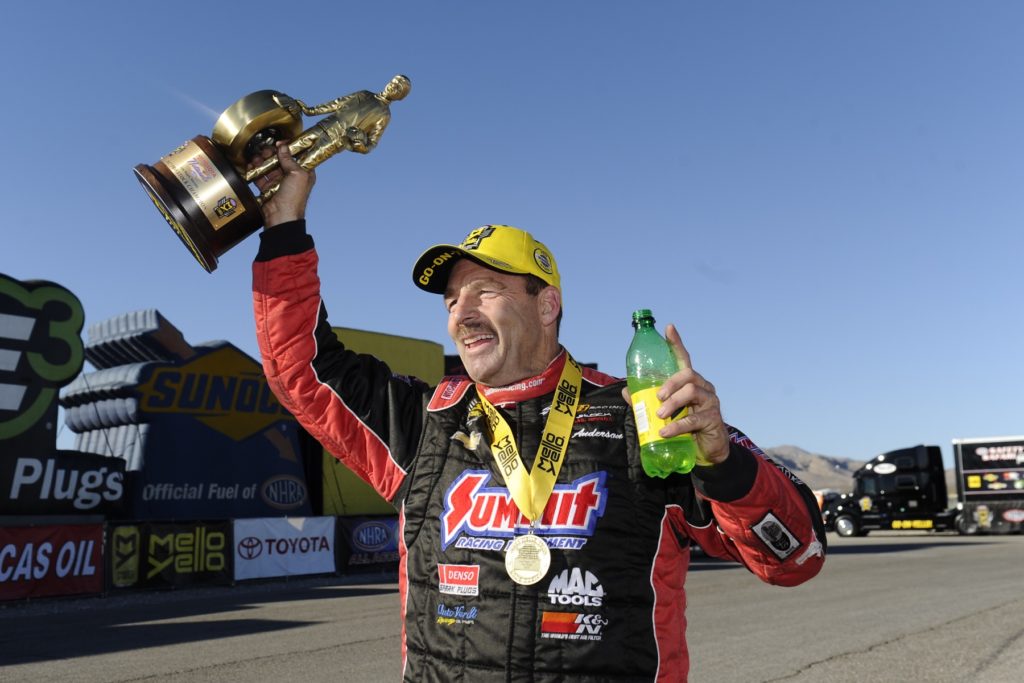 While two Las Vegas victors wouldn’t exactly race their way into a chance at the 2017 NHRA Championship, the Pro Stock Series point leader extended his chance at a fifth championship after his dominating performance at the NHRA Toyota Nationals.

No. 1 qualifier Greg Anderson raced his Summit Racing Equipment Chevrolet Camaro to victory for the fourth time this season after defeating Alan Prusiensky, Chris McGaha and defending world champion Jason Line on the way to his 11th final round appearance this season.

Before securing his 90th career victory, Anderson had to defeat KB Racing teammate as well as one of the drivers standing in his way for a follow-up victory, Bo Butner. With a pass of 6.698-seconds at 204.70 MPH, Anderson once again proved that no one will stop him from grabbing his fifth victory at this event as well as a fifth Pro Stock title.

“I didn’t plan on having to take down my teammate, because our goal for this weekend was to eliminate the Gray team,” said Anderson. “I didn’t think it would happen because they are great drivers, but somehow we found a way and we outlasted them. Now they are not a part of the equation when we go to Pomona. Now we are just going to have to go out there and settle it among ourselves.”

The NHRA Mello Yello Drag Racing Series concludes at the final event of the season at Auto Club Raceway at Pomona, Nov. 9-12, with the 53rd annual Auto Club NHRA Finals. Stay tuned to RacingJunk.com for all your NHRA coverage!