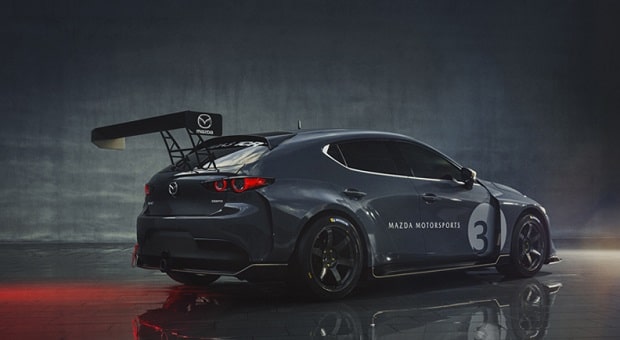 The survival of motorsports is based on grassroots participation. Bringing new drivers into the fold means giving them affordable ways to participate and enhance their talents.

IMSA has several ways for drivers to use a ladder system to move through different series if they intend to move towards the top, the sanction’s premier WeatherTech Sports Car Championship. In its IMSA participation, Mazda has now decided to strike a pose in the Michelin Pilot Challenge, which is a manufacturer-based touring series with two levels: GS and TCR.

It is the more affordable and emerging TCR faction that Mazda joins with its handsome, popular and capable Mazda3 hatchback, which has recently been refreshed inside and out for the buying public. The Mazda3 TCR joins Audi, Hyundai, Honda and Alfa Romeo in the TCR division of the Michelin Pilot Challenge next January, when the next season begins during the Rolex 24 at Daytona weekend, January 23-26, 2020.

“TCR represents a great opportunity for us to showcase the new Mazda3 and provide our customers another avenue to race Mazda vehicles,” said Masahiro Moro, chairman and CEO of Mazda’s North American operations. “Some of our most important successes in IMSA and SRO TC Americas have been thanks to dedicated customers who chose to race with Mazda. We hope the next generation of Mazda racers see the same potential in the Mazda3 TCR.”

Already, the 2019 Battery Tender Global Mazda MX-5 Cup champion Bryan Ortiz has committed to the new Mazda3 TCR. The San Juan-born, Puerto Rican racer is using his $200,000 career advancement scholarship, earned September 21st at WeatherTech Raceway Laguna Seca, to move out of the roadster and into the hatchback.

“I’m proud to represent Mazda and have the trust of the company to race the new Mazda3 TCR,” he said.

The Mazda3 TCR gets its power from a turbocharged, four-cylinder engine that produces 350 horsepower. It will use a paddle-shifted six-speed transmission. The running gear has been developed and is being supported by the manufacturers of the Global Mazda MX-5 Cup car, Long Road Racing. The Mazda3 TCR is homologated to compete in any of the 36 worldwide TCR-sanctioned championships.

“Mazda3 features the outstanding design and engineering that Mazda is known for,” said John Doonan, director of Mazda Motorsports. “Because of that, it is a fantastic foundation for our new Mazda3 TCR. We have looked forward to returning to the IMSA Michelin Pilot Challenge for several seasons and everyone at Mazda is very excited we will do just that in 2020.”