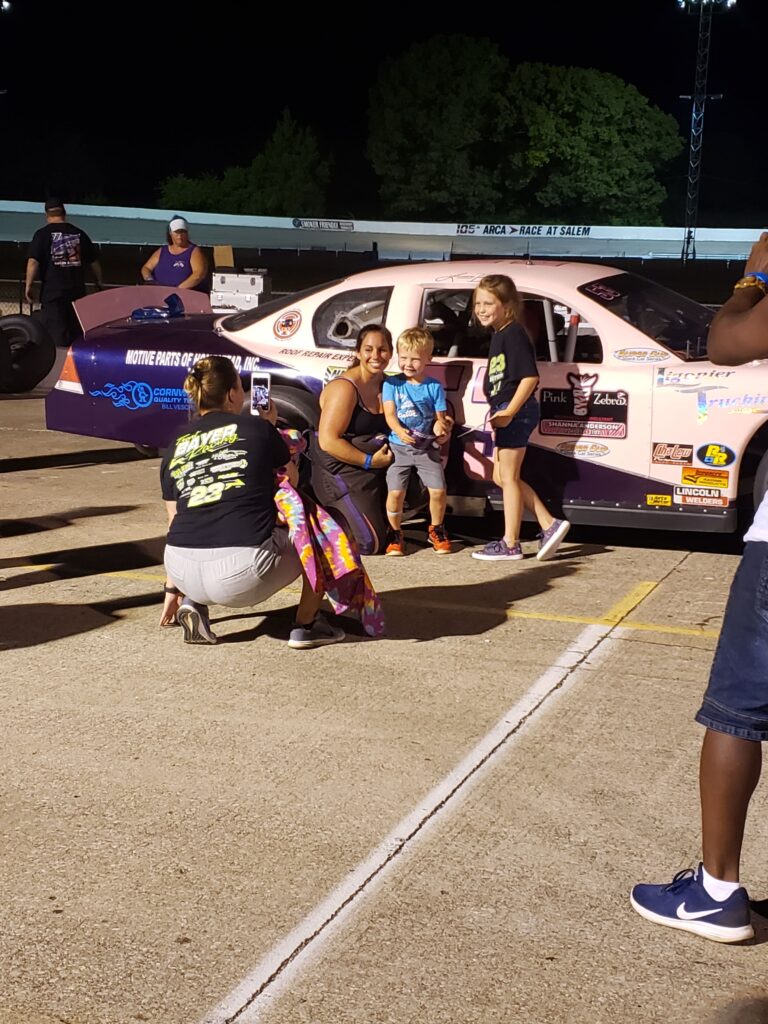 Congratulations to the Max the Tach V inTech Trailer Giveaway Top 3 Finalists.  RacingJunk reached out to each of these grassroots racers to share a little more of their stories with our readers. Voting for the inTech Trailer winner will be open until 12/16/20, so be sure to go root for your favorite.

Lauren Butler of West Mifflin, PA races in the travelling Super Cup Stock Car series, when she’s not at her hometrack of Jennerstown Speedway. The mom and recent tech school grad aims to race more and win more next season, thanks to the inTech Trailer sponsorship.

RacingJunk: What do you race (car, series, etc)?

Lauren Butler: I race in the Super Cup Stock Cars Series which is a travelling series. I also race in the Martella’s Pharmacy Late Model Division at my home track which is Jennerstown Speedway. The Super Cup is an ‘09’ Predator Chassis with a 2016 Chevy Impala SS greenhouse body, and it’s powered by a Chevy Bowtie engine that produces about 600hp. The Late Model is a Senneker Chassis with a 2014 Chevy Impala SS 5 Star Body, and it’s powered with a 604 crate engine with 425hp.

RacingJunk: How did you get started racing?
Lauren Butler: My dad bought me a go-kart when I was 10 just to run around in, then he asked me if I wanted to try it on a track and that’s all she wrote. I started racing when I was 11 in go-karts and ran my way through the classes earning over 15 wins in the Buckeye Karting Club. I then moved into the Allison Legacy Series at 14 where I spent 3 years with my first stock car. After the series cancelled in 2006, I hopped into my dad’s old Street Stock at 17 which was a 1976 Oldsmobile Cutlass with a 1999 Monte Carlo body. I earned 3 wins with that car. In 2015, we bought a new Street Stock that was a big spring chassis and I earned 13 wins and a championship over the next 2years. Now I’m travelling with the Super Cup Stock Car Series where I earned Rookie of the Year, The Hard Charger Award, 3rd in the Northern Division points, 4th in the Overall Divisional points, and 4 podium best career finishes in 2019. I also started running at my home in the Late Model division in the late half of 2020 once Super Cups were cancelled due to COVID-19.

RacingJunk: What do you do besides racing?
Lauren Butler: I am recent graduate from Pittsburgh Technical College and a Certified Surgical Technologist at West Penn Hospital. I am also a mother of 2 boys (Joey 10, Angelo 8 ½) who have kung fu classes and race go-karts and play around on their quad.

RacingJunk: What will winning the trailer sponsorship allow you to do now that you can’t currently do? How will it help develop your race career?
Winning this trailer sponsorship will allow me to focus on both of my cars and allow me to perform at the best of my abilities instead of worrying about breaking down on our way home or to the tracks, wondering if we have to put a car tarp over my equipment because the roof leaks causing damage, which means more funding going everywhere other than the race cars. This causes us to be limited which is really frustrating for a small grassroots team. Winning this will mean more exposure for my team, opening opportunities for future partnerships by being able to travel to tracks we’ve always wanted to go to but couldn’t due to our limited equipment.

RacingJunk: What are your goals for the next season?
My goals for the 2021 season are to win at least 2 races with the Super Cup Stock Car Series, one of those being at my home track of Jennerstown Speedway. I want to win the Northern Divisional Championship as well. I also want to be consistent in the Top 10-Top 5 or better in the Martella’s Pharmacy Late Models as this will be my first full year in this division. I intend on moving up as well into the CRA/JEGS Series or CARS Touring Series in the future.