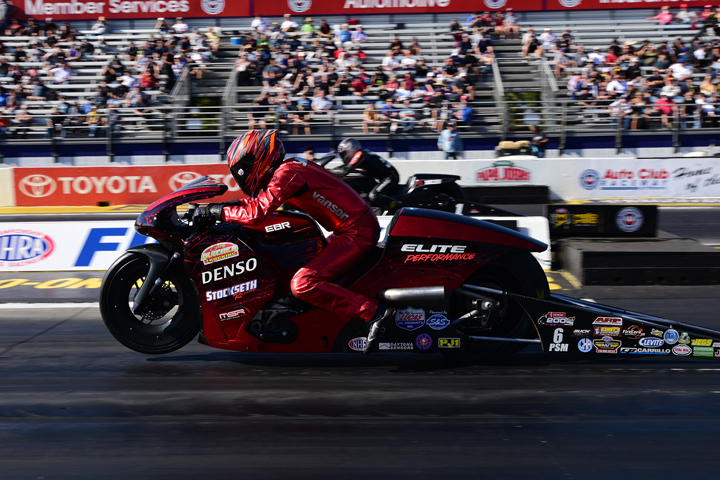 Matt Smith’s road to his third NHRA Mello Yello Pro Stock Motorcycle (PSM) championship traveled from his hometown of King, NC to Pomona, CA. Smith, who also won in 2007 and 2013, rode his EBR Buell motorcycle to the title in the final round of a 16-race season that includes six Countdown to the Championship playoff races.

After failing to qualify for PSM’s season starter in Gainesville, Smith started his upward stride with a victory at Joliet, keeping himself in the hunt through to the end of the regular season, where he ended up in sixth place, behind reigning champ Eddie Krawiec and his five-time champ Vance & Hines teammate Andrew Hines, 2010 champ LE Tonglet, first-to-200mph Hector Arana Jr and 2015 titleholder Jerry Savoie.

It was all up from there. Benefitting from a technical alliance with Elite Motorsports and with his long-time supporter Matt Stockseth, the EBR rider earned victory in three of the final six races – Gateway, Charlotte and Pomona. At the latter event, he had to beat Krawiec in the finals to earn his Pro Stock Motorcycle title – either rider would have hoisted the huge champion’s trophy in taking the final round winner’s light. 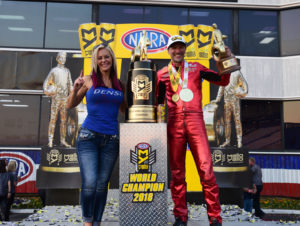 A quarter-finals result at the penultimate race outside Las Vegas had Smith sticking around and testing the following Monday. He said he “found something” there that he was hoping he’d  be able to apply in Pomona, even though the latter track is way closer to sea level. As it turned out, conditions over the championship weekend were Vegas-like, and whatever it was Smith “found” turned out to be golden.

On Friday during the second round of qualifying, Smith became the third member of the PSM 200mph club, joining Arana Jr and Krawiec; Saturday’s round 3 of qualifying yielded a second 200mph marker, as Smith bounded to the top spot at 201.10mph, gathering points-and-a-half totals as he went, already ensconced as category leader with four points in hand over Krawiec entering the race.

Sunday, though, was another story altogether. Racing wife Angie, who had “issues” in their first-round match-up, Smith relinquished lane choice to Hector Arana, but his 200.29mph lap closed the door on the elder Arana. In the semis, he put Tonglet on the trailer with his second 200-mph run of the afternoon; he did it again in the finals, besting Krawiec with his best lap of the weekend, 201.22mph, his fifth 200-plus run of the meeting. There was nothing left but tears and joy, sharing with his family and team.

Smith collected his trophy, medals and picayune $75,000 prize for winning the title on Sunday afternoon and  celebrated at Monday night’s banquet. Now he’ll go back to North Carolina and prepare, not only for his defense of this third Pro Stock Motorcycle title, but some Pro Stock racing with Elite Motorsports next year, on weekends when PSM isn’t on the schedule.

Might Matt Smith attempt to emulate his dad, Rickie Smith, a three-time E3 Pro Mod NHRA champion who finished second to first-timer Mike Janis this year? Matt Smith turned 46 on Sunday – what a great birthday gift to himself in winning a third title – so a swap to four wheels isn’t all too far-fetched.