The veterans of the NASCAR Camping World Truck Series returned to their racing roots at Wednesday night’s fifth annual Eldora Dirt Derby 150 at Eldora Speedway. Local dirt modified modified racer Stewart Friesen led the pack of cars to the wave of the flag, and the dirt demon posted the fastest laps during Tuesday’s practice and looked like the favorite driver to win this race after leading 87 of the 150 laps and pulling off the Stage 2 win.

Despite his dominance, Friesen had to settle for a runner-up finish after Stage 1 winner Matt Crafton patiently worked his way from the bottom of the top-10 and took advantage of a Lap 127 caution to position himself to challenge a dominant Friesen for the win. As the laps wound down, Crafton would find his way past the dirt track veteran to find his first win since Charlotte Motor Speedway in 2016 and his first ever win in the dirt. 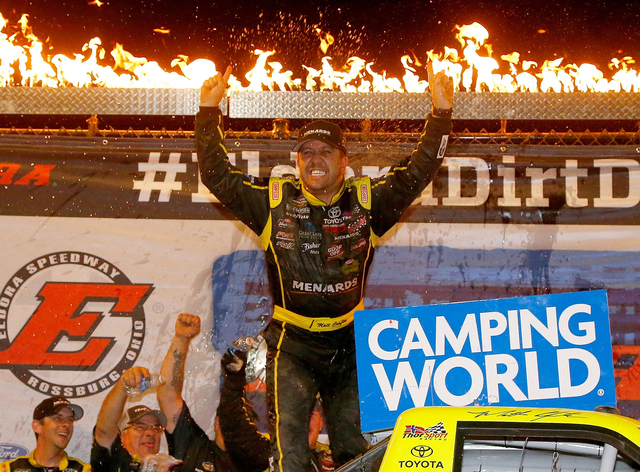 “My first dirt win was a lot of fun,” said Crafton. “In the second part of that race we down-right just stunk. It was my fault. We over-tightened it a little bit in the first run. It got free and we just went back to the way we started the race. I knew I was getting beat down low, but we may have to tear the right side off to get the win. I started doing it and this truck became a rocket ship.”

Friesen, who finished second to earn his career-best finish in the Truck Series, accepted defeat with dignity.

“Congrats to Matt; he’s been doing his homework on the dirt and it paid off,” said Friesen. “We didn’t come here to run second, that’s for damn sure, but I’m proud of these guys. They worked hard to get this truck dialed in. We had a great truck; Matt just got rolling on the top, it cleaned up, I was committed to the bottom and he just found a line that got us.”

Next up for the NASCAR Camping World Truck Series is a trip to Pocono Raceway for the Pocono Mountains 150 on July 29. Stay tuned to RacingJunk.com for all the latest NASCAR coverage.