On August 18th, 2017, a new land speed record was set for the fastest diesel truck out on the Bonneville Salt Flats during the 69th Annual Southern California Timing Association Speed Week in Utah by the Greenspeed Research (GsR) team with a vehicle powered by a MAHLE Motorsports Monotherm steel pistons, Clevite bearings and MAHLE Original gaskets.  Hitting a speed of 219.411mph, driver Dave Schenker ran the retrofitted Chevy S10 to break the previous decade long record of 215.091mph in the diesel truck class.

Racing among 500 other entrants at the event, the truck represented a winning partnership between non-profit education group GsR, started originally as a student group from Boise State University, and MAHLE, proving to be a learning experience for both.

“Greenspeed Research has received top notch tech support from the everybody in the Mahle group from Clevite to the Motorsports division,” says Dave Schenker. “It’s great to be able to call up an actual engineer to discuss complex topics when the need arrises, and hang up the phone with a concrete solution to the problem.”

GsR’s diesel truck project launched when most of the team were students at Boise State in 2011. The original project involved running a vegetable oil-powered truck, and the Chevy S10 broke an existing LSR record going 155 miles per hour, then upped that record to 166 mph in 2012. In 2013, it participated in licensing runs in preparation for Bonneville in 2014. Unfortunately, due to bad salt conditions, Speed Week was cancelled in 2014 and again the following year.

Work on the project continued, however with MAHLE coming on board, and in 2016, the S10 hit a record of 209mph.  However, going any faster on a biodiesel powered engine proved challenging, so the team switched to diesel for the upcoming record to test the vehicle and the MAHLE components. That run was clearly a success, but the ultimate goal is still to get the issues with biodiesel sorted to and beat the record with 100% vegetable oil. 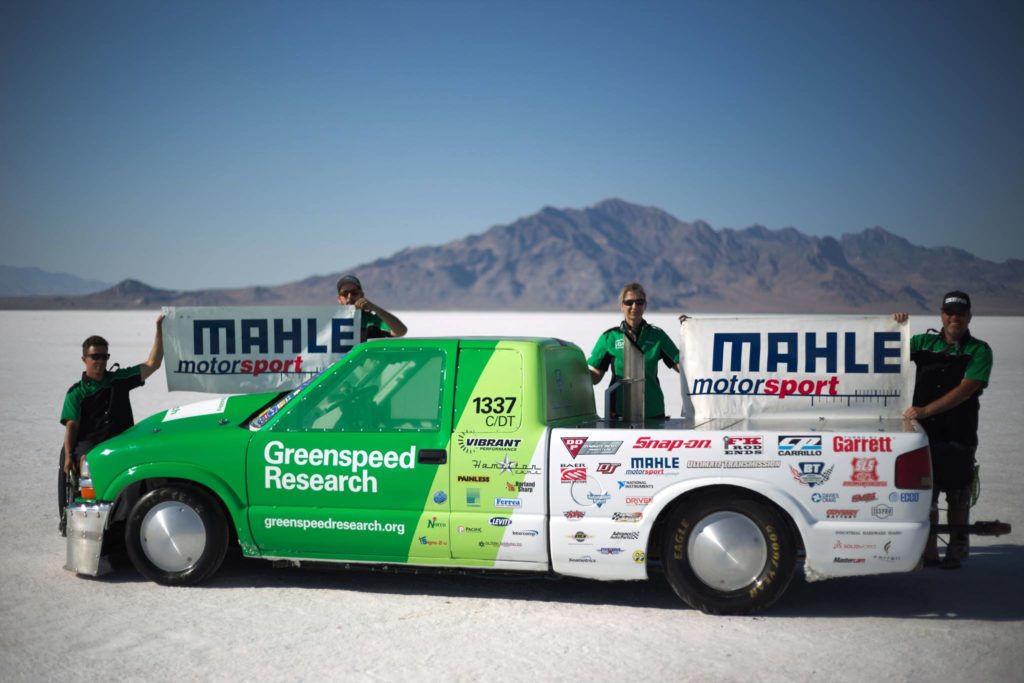 “MAHLE got on board with GreenSpeed back when they were still a student club at Boise State University. A sponsor of theirs and friend in our industry asked if we’d consider supporting them with MAHLE products and the rest is history,” explains Bill McKnight, MAHLE Aftermarket Inc. Marketing Team Leader. “I’ve been to every Bonneville that they’ve raced and watched them grow from students to business owners of GreenSpeed Research. Through all of the changes, their passion for alternate fuels and engineering excellence has never wavered! To see them get a world record was the culmination of a dream come true and also the pathway for their next endeavor into off-road racing. I can’t wait to see what’s next.”

“We want to do this to prove once and for all that you don’t have to lose performance by using a plant based energy source,” explains Patrick Johnston. “After this, we will NEVER run vegetable oil again as it is NOT a fuel in the same way that crude oil is not a fuel (you refine crude oil into an ASTM product like gasoline, vegetable oil should be refined into the ASTM product “bio-diesel”).

“We are nearing the end of building a bio-diesel powered trophy truck capable of a podium finish, we just need to partner with a driver who is as capable as the truck, and who is as excited about the international impact this kind of motorsports can have as we are.”

About Andreanna Ditton 265 Articles
Andreanna Ditton is the Content Manager for MotorHead Media and the Editor-in-Chief for RacingJunk.com/news. She's been working in the automotive publishing industry since 2007 focusing on racing and performance for motorcycles and cars.