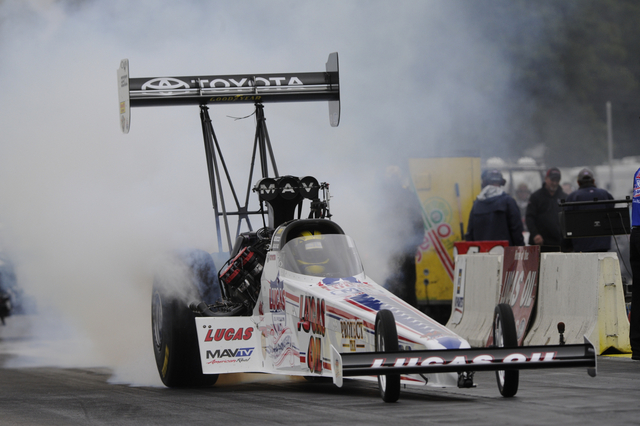 In only his third Top Fuel start of the 2014 NHRA Mello Yello season, Morgan Lucas stepped out from behind his corporate desk at Lucas Oil headquarters to return to victory lane in his family’s namesake event, the Lucas Oil Nationals at Brainerd International Raceway.

The excitement was left to Top Fuel though, as numerous rain delays pushed the Funny Car final between John Force and Ron Capps to be determined  in two weeks  at the Chevrolet Performance U.S. Nationals in the third round of qualifying.

Pro Stock is left with four combatants: Minnesota favorite Jason Line against David River and Vincent Nobile versus five-time Pro Stock champ Jeg Coughlin. These semi and finals will be held during the fourth and fifth qualifying sessions on Sunday at the prestigious Indy event. 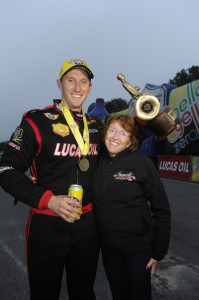 Morgan Lucas and his Lucas Oil crew may be a part-time team, but you wouldn’t know it from their performance at  the Lucas Oil NHRA Nationals at Brainerd International Raceway.

At the top end of the racetrack, Lucas received the Wally from his mom, Charlotte, and congratulations from his smiling dad, Forrest.

“She gets more excited than anybody,” Lucas said. “My dad was really pumped up. The first thing I said when I saw him at the finish line was, ‘I just blew up a lot of your stuff.’ He said, ‘I know but I’m still smiling about it.’ ”

Lucas scored his 10th career win and third at Brainerd in spectacular fashion. After rain delayed the Top Fuel final to a little after 9 p.m. local time, Lucas and Doug Kalitta engaged in an epic pedalfest. Kalitta, who reached his 10th final of 2014, got ahead but spun the tires badly while Lucas gradually re-engaged after he spun his tires off the line.
As Lucas sped ahead, he blew the engine in the lights but hung on with a pass of 4.886 seconds at 229.55 mph, holding off Kalitta’s pass of 4.987 at 256.16 mph.

“It got out there and the car kind of broke the tires loose,” Lucas said. “I saw Doug poke out but I knew he was having problems, so I kind of blipped it to straighten it out. I got it cracked a little bit open, and I rolled it back down all the way and got it out there. I knew it was hurt but it’s the final, you’re not going to leave anything on the table; you’re going to go for it.

“Then it lit up, and that was actually kind of cool too because my second thought after ‘Hell yeah we just won’ was ‘Man, this is going to make for great TV.’ He wasn’t wrong. It made ESPN’s SportsCenter’s No, 5 sport’s moment of the day.
Lucas’ first win of 2014 made for a great show for the fans as he had made two prior starts this year, advancing to the semifinals in each race. In the first round this weekend, Lucas took out Bob Vandergriff Jr., a round-win that enabled Morgan Lucas Racing teammate Richie Crampton to clinch a spot in the Countdown to the Championship. That was also a holeshot win, as Lucas ran a 3.780 pass at 317.94 mph beat Vandergriff’s quicker run of 3.760 at 321.65 mph.

Lucas then whipped past Steve Torrence in the second round to set up a semifinal match against Antron Brown, the No. 2 driver in the Top Fuel points standings. But Lucas and his dragster were up to the task, as he ran his career-best elapsed time, 3.729 seconds at 323.66 mph to defeat Brown.

But Sunday, Lucas and his Lucas Oil 25th Anniversary team, led by crew chief Aaron Brooks, proved they were best.

“This might be the most special win because you’re not getting 100 to 200 cracks at it during the season. That was our 22nd pass of the season. It’s a really cool feeling.”

Brainerd is a special place to Lucas and his family; he made his Top Fuel debut there and won a Top Alcohol Dragster race on the same weekend that his good friend Eric Medlen won in Funny Car. 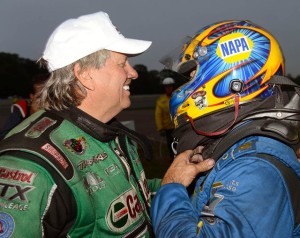 John Force and his Castrol Mustang will have to wait two weeks to see if he will claim his fourth win of the season and his 142nd career victory. With persistent rain showers and darkening skies over Brainerd International Raceway, the final Funny Car round for the NHRA Lucas Oil Nationals was postponed Sunday and has been rescheduled for the Chevrolet Performance U.S. Nationals. The Funny Car final will be run during Q3 on Saturday in Indianapolis.

“The fans really hung with us today which made it special. I have won this race 11 times and we are going to have to run it off in Indy. I’ll be racing a great friend of mine Ron Capps. We were both excited. DeJoria did a great job running that 3.99. She and DeLago have a great thing going. My car ran in the threes but I keep cheating that light and trying to make sure I get those wins. I am excited and I want to thank all the people that spent time with me this weekend,” said Force, the 11-time Lucas Oil NHRA Nationals winner.

Force also retook the Mello Yello points lead passing teammate Robert Hight when he took out Tommy Johnson Jr. in the semi-finals. This will be Force’s 15th final round at the Lucas Oil NHRA Nationals in 29 appearances. 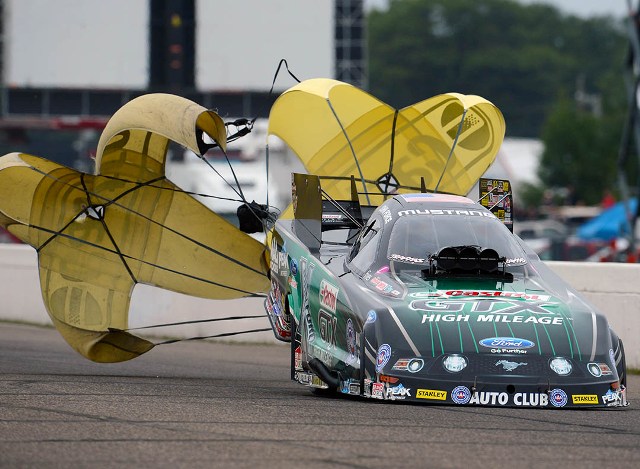 Racing from the No.1 qualified spot for the 151st time in his career, John Force faced Bob Bode in the opening round of eliminations and beat the 2010 Brainerd winner as Force’s 4.180 second pass at 316.45 mph was more than enough to get the win and advance him to the next round in the tire-smoking race.

Going into the quarter-finals, John Force lined up against Del Worsham. Force’s Ford went straight down the track with a 4.064 second pass at 320.89 mph, good for the win and lane choice going into the semi-finals. He then headed into the semi-final round where he faced Tommy Johnson Jr. It could have been anyone’s race, but Force was able to muscle past Johnson with a 4.021 second run to a losing time of 4.203 seconds.

Ron Capps, starting from the No. 2 position, bested Jeff Arend, DSR teammate Jack Beckman on a holeshot, and two-time 2014 winner Alexis DeJoria to advance to his third final round of the 2014 NHRA Mello Yello Series season and eighth at Brainerd International Raceway. 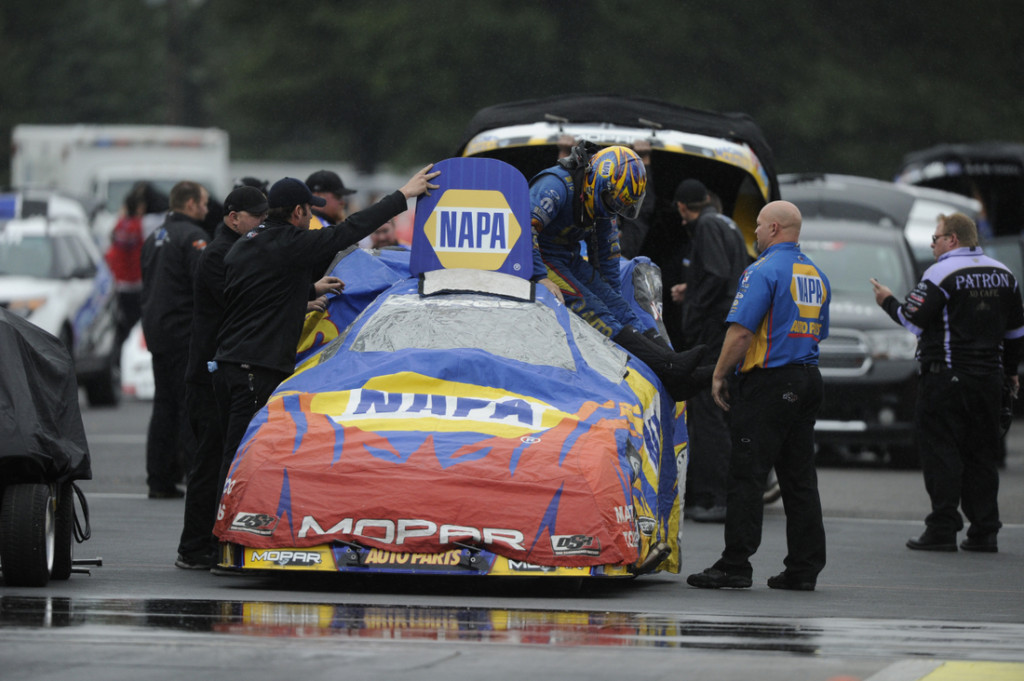 “It’s a little bittersweet because this place has become like family to me,” Capps said after his semifinal win at Brainerd. “We’ve run so well here winning the last two years and going to the final the year before that. I’m bummed that we can’t run the final in front of these passionate fans that stuck around all day. If you put together a week in the Zoo and being in the grandstands all weekend and with the rain today, these are some of the best fans we have on the circuit.”

PRO STOCK
Pro Stock racer Jason Line had a very fast car on Sunday at Brainerd International Raceway and it paid off as he returned to the points lead for the first time since winning the season opener. He was on a tremendous ride in Minnesota as he barreled through eliminations at the racetrack’s 33rd annual NHRA Nationals with what was clearly the most powerful car on the property.

Unfortunately, Mother Nature had her way with the day, and the second half of eliminations had to be delayed for completion until the next race on the Mello Yello Drag Racing Series tour, NHRA’s Chevrolet Performance U.S. Nationals at Lucas Oil Raceway on Sunday, August 31.

Line, who qualified with a 6.622 at 208.49 to start from the No. 2 position, blazed past Mark Hogan in the first round of eliminations to win the round with a tremendous 6.573-second blast at 209.69 mph that was well ahead of the pack and good for low ET and top speed of the meet honors.

With lane choice, Line advanced to a second-round meeting with Shane Gray, and he continued his dominating performance with a 6.580 at 209.30 that was the quickest and fastest of the round. Unfortunately, it became too dark and damp to realistically complete eliminations, and NHRA officials – after consulting with the teams – made the decision to complete the semifinals and final round in Indianapolis.

Line’s semi-finals opponent, No. 14 qualifier Dan River, won his first two rounds of Pro Stock eliminations of his career taking out some of the bigger names in the sport of then, point leader, Erica Enders-Stevens and Dave Connolly to get his chance against Line.

Line has won a remarkable 34 national events in 70 final rounds as a Pro Stock driver, but he has, surprisingly, never won at Brainerd International Raceway, his home track. Heading into the event on a wave of momentum and with two consecutive victories recently collected, Line said that this weekend in Brainerd could be the best shot he’s had at obtaining victory there.

“Would I have preferred to do it here? You bet,” said Line. “But things don’t always go the way you want them to. We had a super fast car today, and I think we would have been tough to beat – there is no question; the car was really fast. Hopefully, the momentum will continue.”

On the other side of the Pro Stock ladder marks another milestone in Jeg Coughlin’s storied career, as he has never completed a race at a different venue.

“This will be a first in my career, I believe,” Coughlin said. “It happened maybe one other time, but I wasn’t in the event. I was a victim to the track before they called it. It will be interesting. I love Indy and I can’t wait to get there and perform in the 60th anniversary of that race.”

Coughlin will line up against Vincent Nobile in the fourth qualifying session at Indy, which will serve as the Brainerd semi. Coughlin will have lane choice after a 6.612-second pass at 207.88 mph took out Deric Kramer in the second round.

“We made it through the first two rounds before they ended up postponing our event to finish on Sunday at Indy,” Coughlin said, the No. 5 qualifier. “I felt pretty good about our car today. We improved a little bit from Saturday’s runs, and I felt like if we had run it tonight we would’ve had a good chance to challenge for a race win, but we’ll never know and we’ll move to Indy.”