RacingJunk News > Galleries > Looking Back at the Evolution of the Ford Performance 5.0L Coyote Engine
Previous
Next 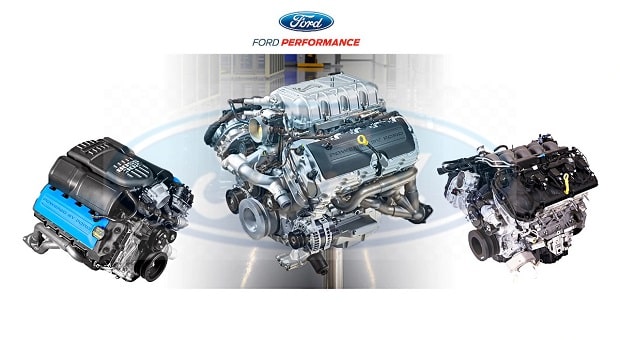 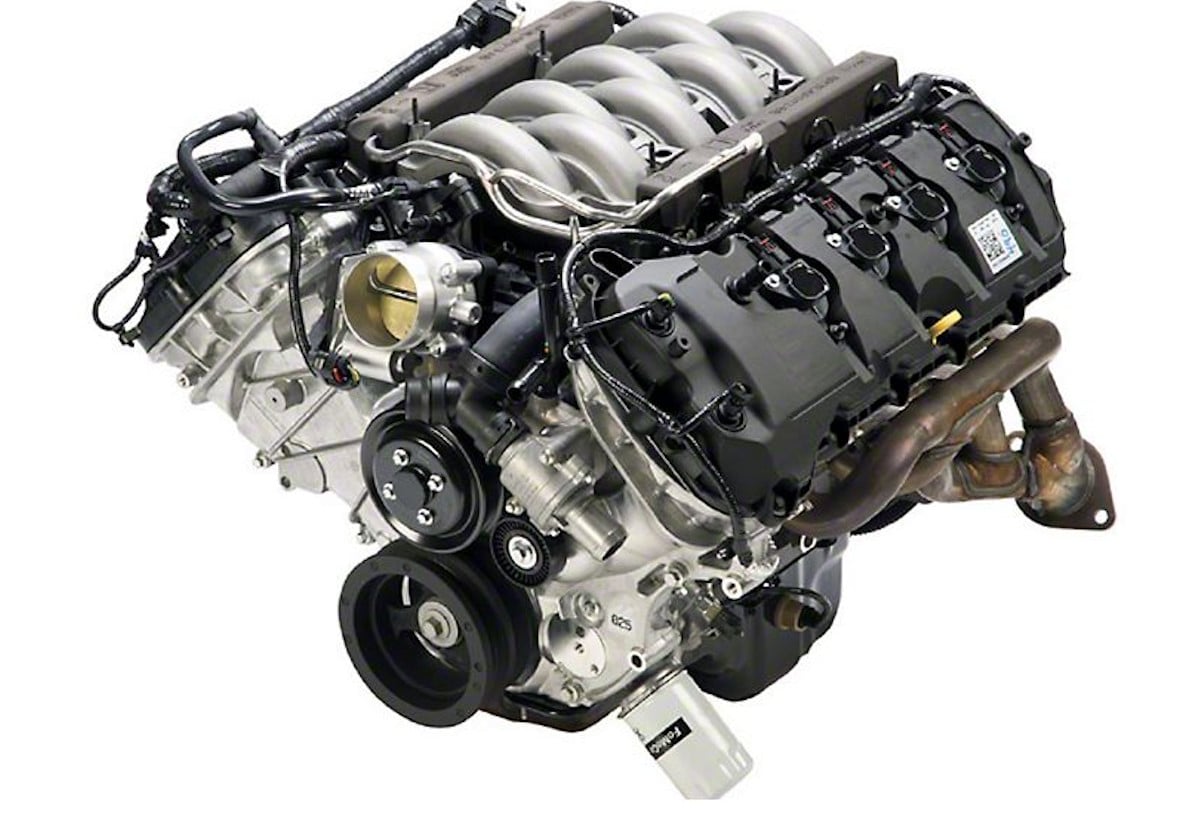 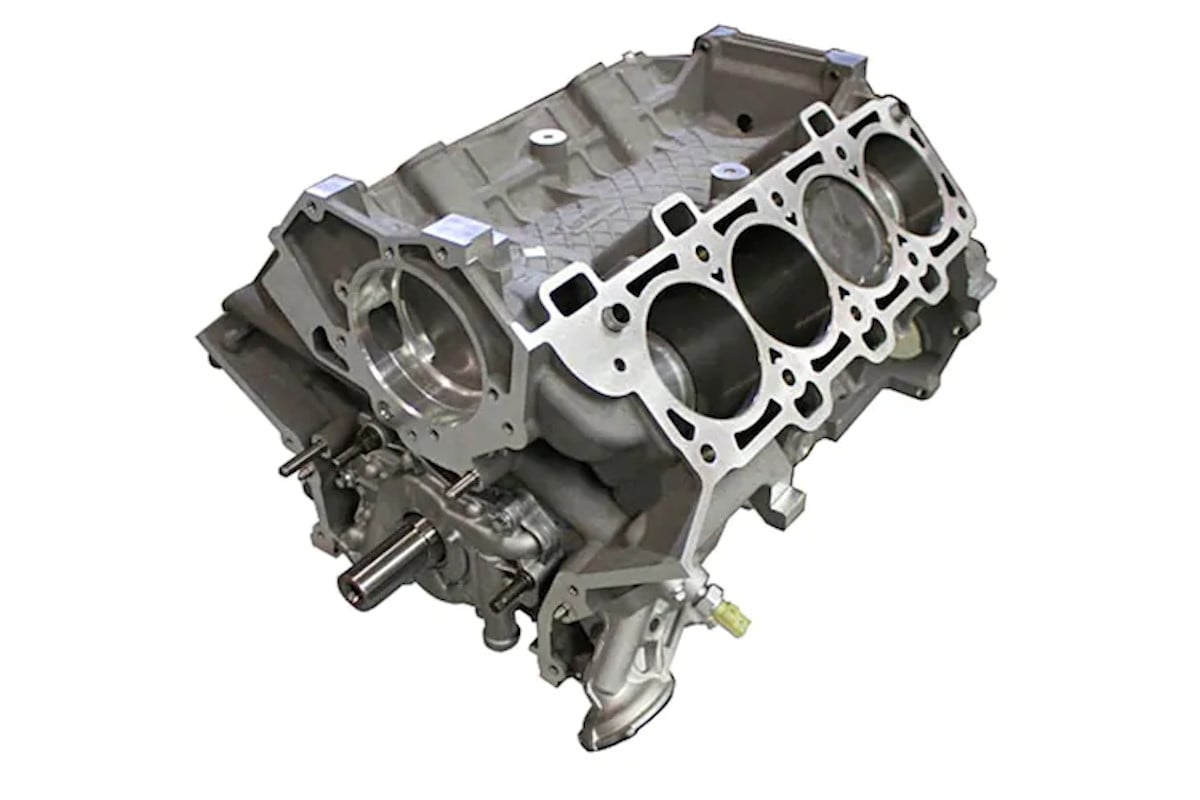 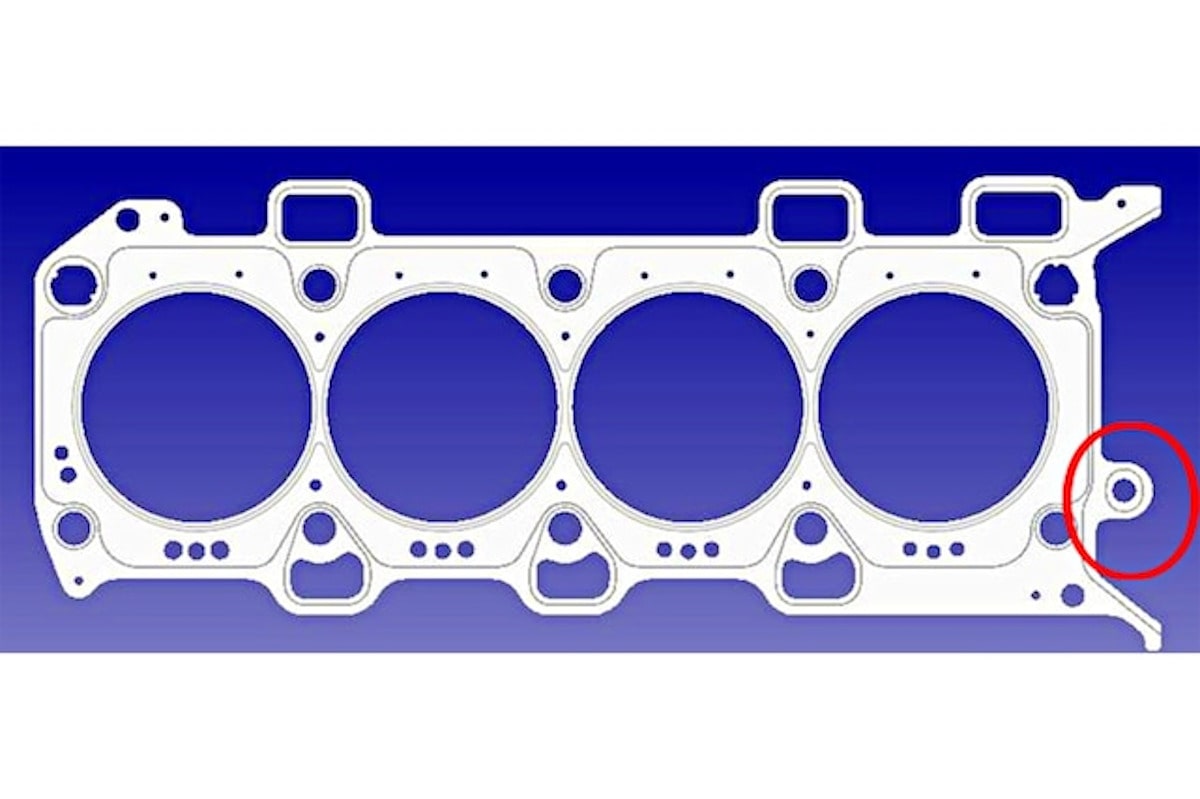 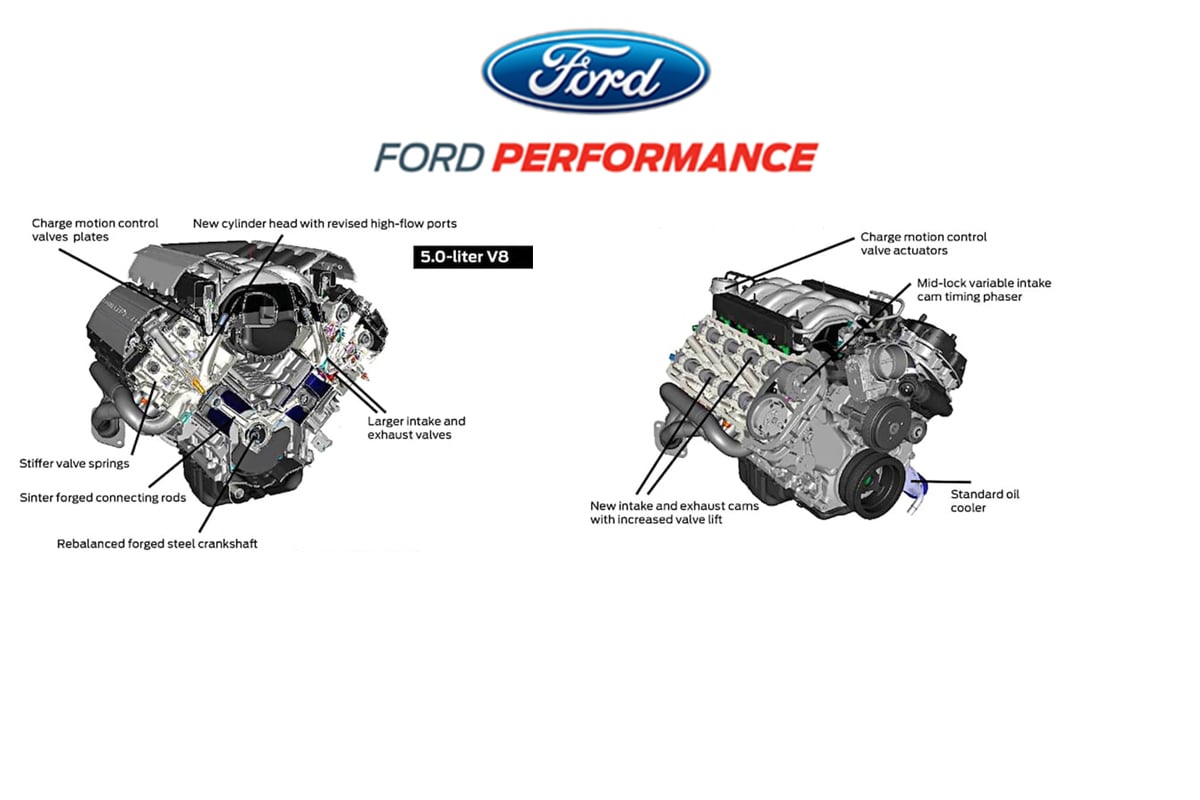 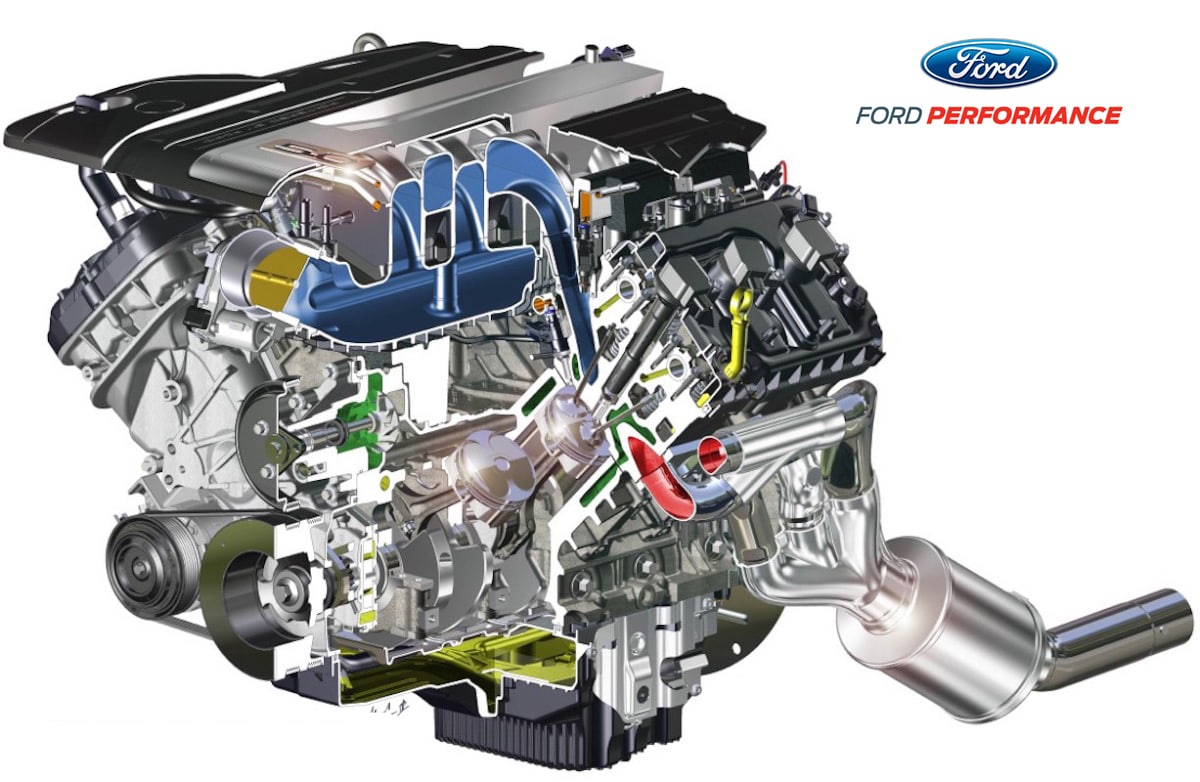 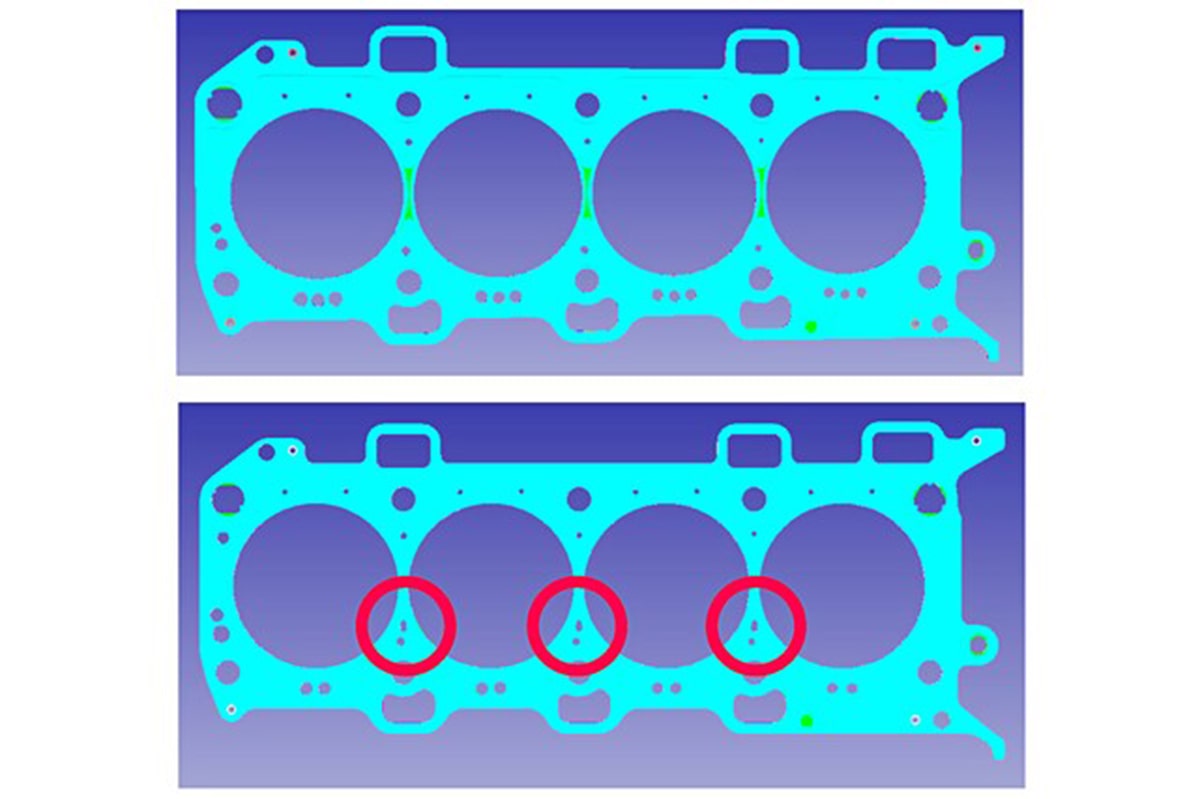 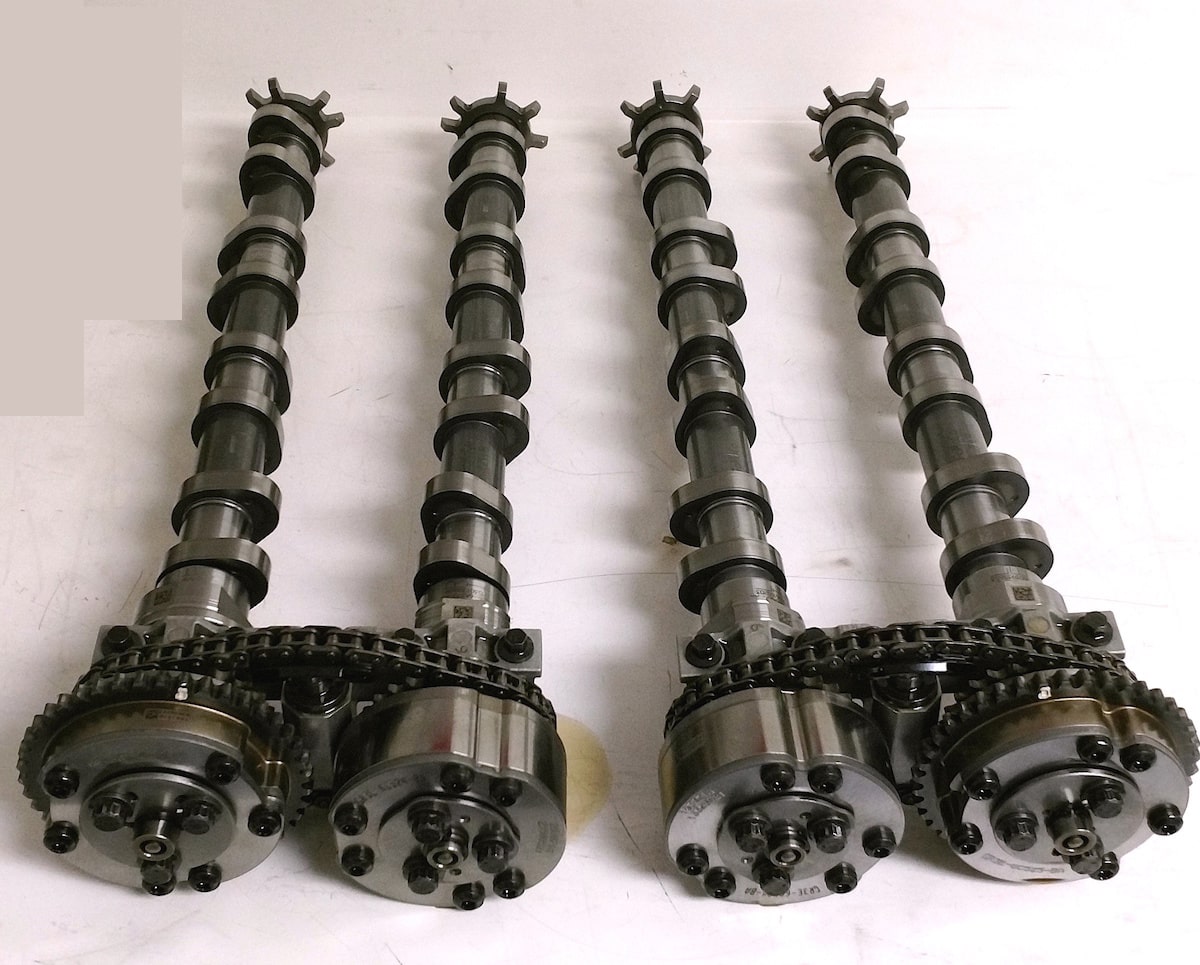 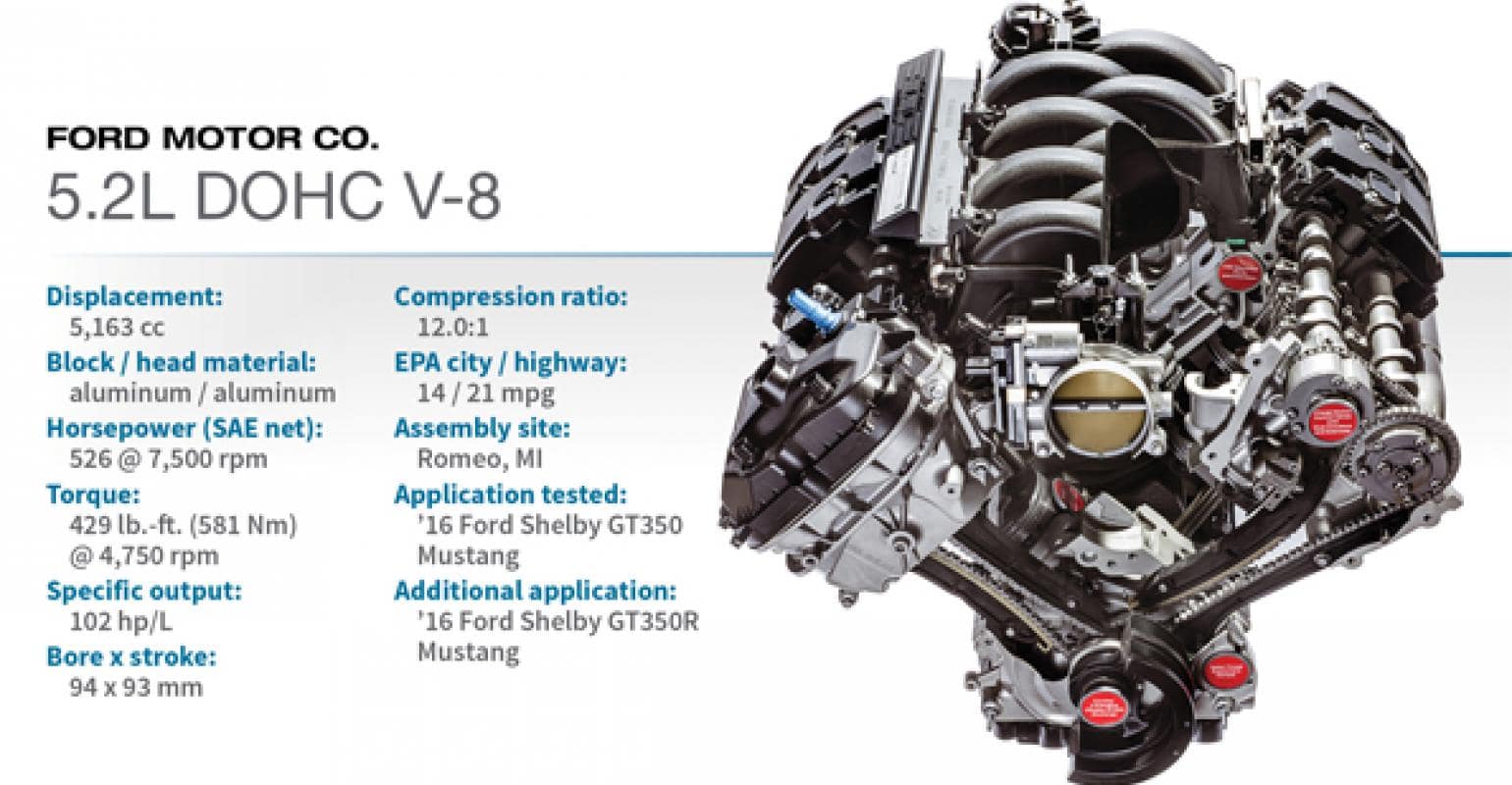 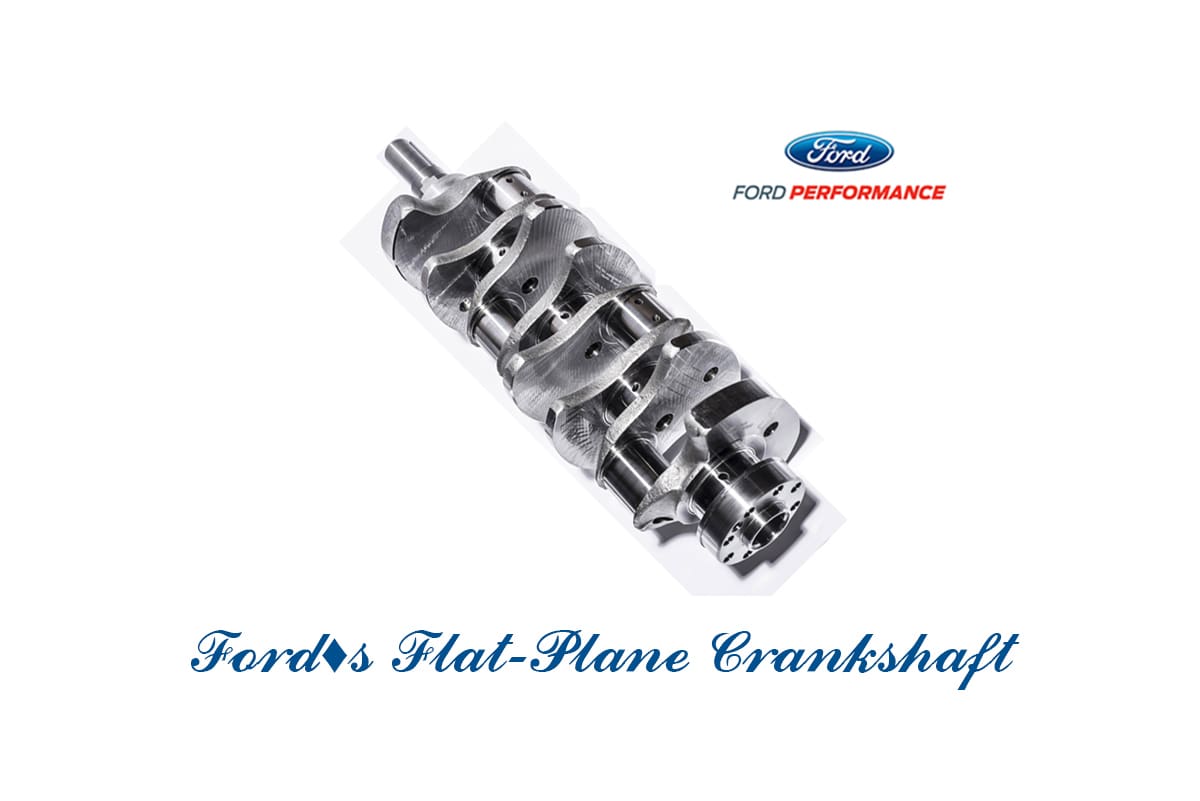 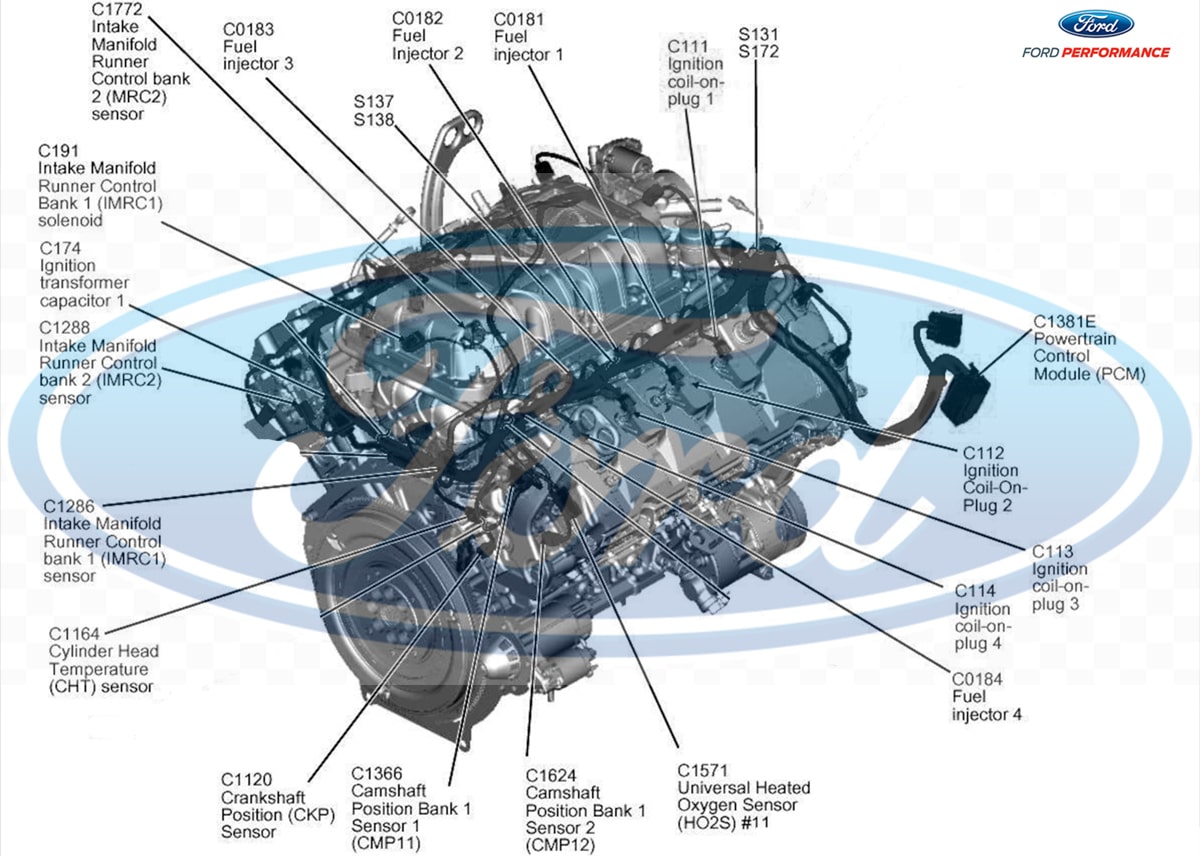 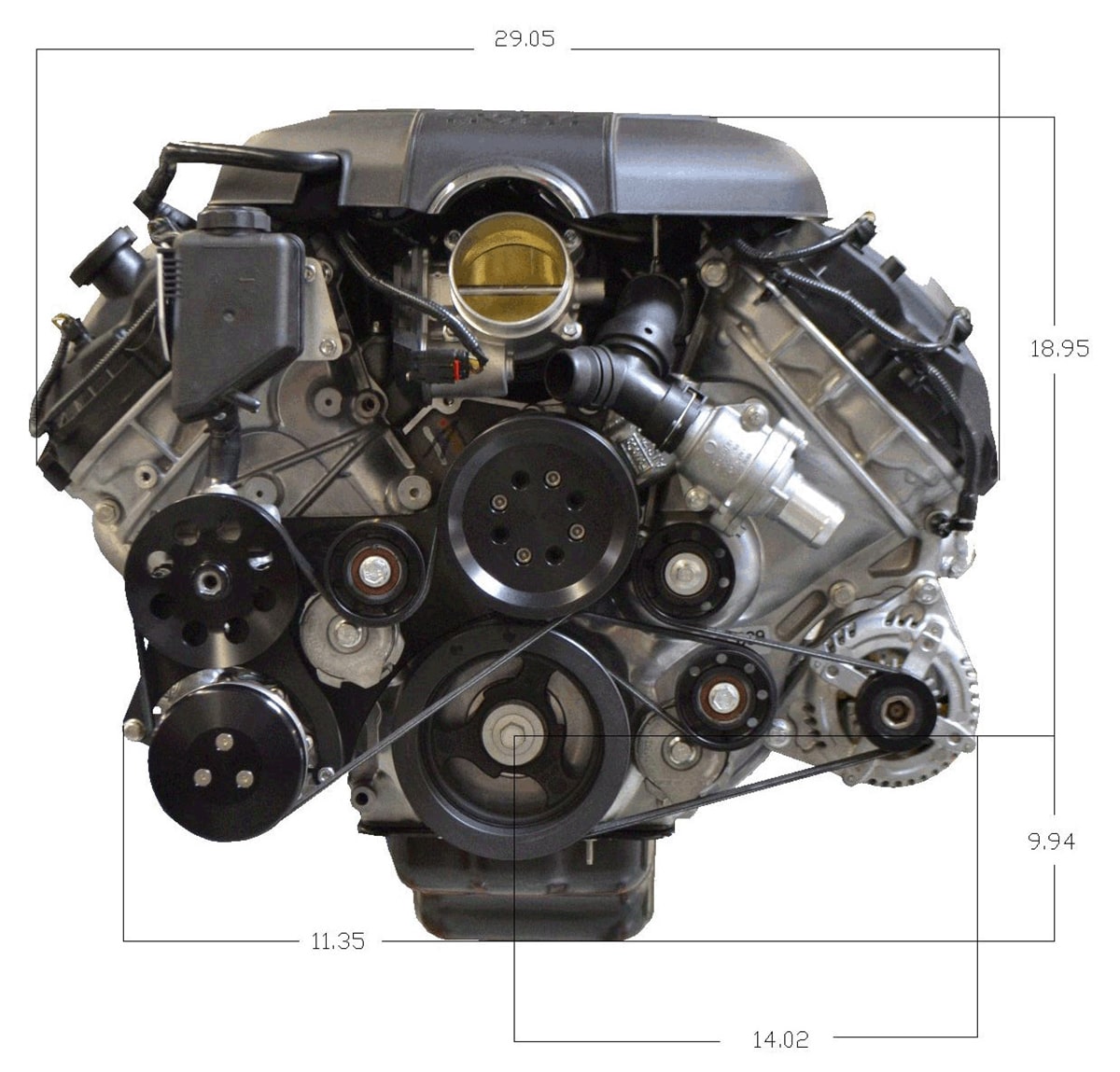 Since Ford Performance introduced the Ford Performance 5.0L Coyote crate engine in 2011, it’s developed a loyal following of Ford enthusiasts and become a Mustang GT staple. Ford Performance hasn’t stopped tinkering with the original Coyote design since. The first big changes to the design came in 2015 with the Ford Performance 5.0L Coyote Long Block. There have been two iterations since then, with the Gen 3 block being introduced in 2018. RacingJunk is going to take a look at the major changes to the engine through the years.
Ford’s three-valve 4.6L V8 had been under the hoods of Mustangs since the 2005 model year, when the Coyote first started howling in 2011. Although the Coyote engine was a completely new design for the Five-O, it is still considered a member of the Modular family.

A composite intake manifold, like that of the old 4.6 sits atop a cast aluminum block and heads. The 4.6L’s deck height of 227mm (8.937 inches) and bore spacing of 100mm (3.937 inches) was used as well. Although this design makes the engine easier to package, it limits bore size, with the new engine’s bore and stroke of 92.7mm (3.649 inches) and 92.2mm (3.629 inches), respectively, giving it a total displacement of 302.1 cubic inches. The 11:1 compression ratio had some enthusiasts scratching their heads because, at the time, that was too high for boosted applications with pump gas. However, this would prove to be one of the Coyote’s biggest advantages when all was said and done.

The single overhead cam design of the three-valve 4.6L limited what could be done with valve timing to increase power and efficiency, since the intake and exhaust lobes are on the same cam. The Coyote’s dual overhead cam design is what gives it unmatched versatility and the ability to make gobs of power, and was Ford’s first since the older four-valve 4.6L. Separate intake and exhaust cams are where the similarities end between the two engines.
Twin Independent Variable Cam Timing (Ti-VCT) is the biggest difference between the two designs and the Coyote’s secret weapon. Ford used it in other engines, but this was the first time it had been used in the V8 and, as mentioned, it’s probably the most significant aspect of the platform. Ti-VCT can advance and/or retard intake and advance timing through 50 degrees to advance or retard valve timing to bump dynamic horsepower and torque production when your driving demands it. It also allows for adjustments under normal driving conditions to enhance fuel economy and lower emissions.

Lobe separation angle (LSA) can be adjusted dynamically, since the intake and exhaust cams can be moved independently of the others. This means you can tinker with the amount of time both valves are open on the fly so you can have the low-end torque that a wider LSA gives and the top-end power a narrower LSA gives. Since cylinder pressure can be manipulated on the fly with cam timing; boost isn’t an issue.
Gen 2 Coyotes benefit from many of the lessons Ford learned on the Gen 1. Airflow through the engine was improved by giving the cam more lift, revising port design and making the valves bigger. Low-end torque and idle quality were also improved by the addition of charge motion control valves (CMCV). CMCV technology allows the valves to be slightly closed from max lift to improve air swirl entering the combustion chamber at low RPM. The Gen 2 VCT was also changed to limit camshaft movement to 25-degrees from the earlier 50. This improves the Coyote’s cold start emissions.
Other mods included stiffer springs to combat valve float at higher RPM and a straighter airflow path in the cylinder head casting. Ford also changed the head bolts to 11mm to improve clamping under boost. Gen 2 engines also received the same sintered connecting rods used in the Boss 302, giving the rods more high RPM strength. High RPM stability was also enhanced by rebalancing the factory forged crank. All these changes increased power output from 420 ponies to 435 colts.
Arguably the largest changes to the Coyote platform came with the most recent iteration, the Gen 3. Direct injection is probably the biggest of these big changes. The use of both high-pressure direct injection and low-pressure port injection makes the Coyote unique among its peers, too. It also supports the bump in compression from 11:1 to 12:1 the Gen 3 experienced. Performance and efficiency are enhanced by this fuel system design.
Gen 3 heads also got more coolant passages to enhance cooling, especially under boost. Stronger castings and the return of 12 mm headbolts increased the engine’s strength. Cylinder bore was also slightly increased-from 92.7mm in previous generations to 93 in the Gen 3. Plasma Transferred Wire Arc (PTWA) cylinder walls-borrowed from the 5.2L GT350 engine-were used instead of the inserted steel sleeves used previously, reducing the engine package’s weight.
More changes to the Gen 3 cylinder heads included the installation of bigger valves-from 37.3mm to 37.7 mm on the intake side and from 31.8mm to 32mm on the exhaust, giving the heads even better airflow characteristics. Camshaft lobe lift was also increased to 14mm from 13mm. This combination of changes gives the Gen 3 heads almost the same flow characteristics as the CNC-ported GT350 heads. The VCT system was also changed, with the exhaust phaser now being actuated from the rear. All these changes amounted for an increase in power output to 460 charging stallions.

Each generation has also undergone changes to the computer calibrations to take advantage of the mechanical changes that were made.
Since its inception in 2011, Ford Performance has also produced some special edition Coyote engines. For instance, there was a special edition Roadrunner engine made for the Boss 302 Mustang in the Gen 1 era. This engine was designed to be a powerhouse while remaining naturally-aspirated. At 444 HP, it was the highest powered V8 to come off a Ford assembly line.
The Gen 2 Coyote also had a high-power naturally-aspirated V8. This time it was the Shelby GT350 and GT350R cars that needed an engine true to the roots of the nameplate. This became the 5.2L Voodoo engine which was, by American standards, pretty exotic and revolutionary. A flat-plane crank was used for this engine instead of the traditional cross-plane crank, the first time a late-model V8 with a larger displacement had successfully used this type of crankshaft.
In this configuration, the rod journals are opposite each other instead of the usual 90-degrees. The configuration is lighter and is thus able to rev higher (it redlines at 8,250 RPM). The nature of this design increases exhaust scavenging and gives these engines a unique exhaust note. As well as having the unusual crank, a number of other parts that were unique to the Voodoo engine were used and displacement was increased to 315 cubes from 302. The heads were also cast with enlarged ports to increase airflow. The mods that were carried out increased horsepower to 526 at 7,500 RPM.
The 2020 model year will herald the Gen 3’s “special edition” engine, the Predator, and will be put into the 2020 GT500. This is a supercharged and direct-injected powerplant that’s rated at 760 HP. Factory boost is 12 psi on the 9.5:1 engine. Predator heads are related to Voodoo heads, although they’re CNC-ported and have even larger valves and stronger springs. Ford engineers gave the Voodoo a 2.65L Eaton TVS supercharger.
The Coyote in all its variants is unarguably a powerhouse that has its competitors deeply concerned. Bumping it up a notch is the massive aftermarket support it enjoys. Aftermarket mods can easily bump power output from the mid-400s of the production versions up to well over 1,000 kicking ponies.

Do you have a Coyote in your rocket? If so, what generation is it and how much power does it put out?
Back to Post
About Mike Aguilar 388 Articles
Mike's love of cars began in the early 1970's when his father started taking him to his Chevron service station. He's done pretty much everything in the automotive aftermarket from gas station island attendant, parts counter, mechanic, and new and used sales. Mike also has experience in the amateur ranks of many of racing's sanctioning bodies.