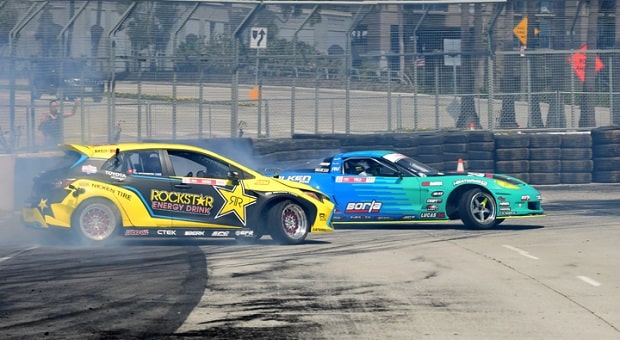 For the 45th time, there will be racing in Long Beach, Calif. For two weekends, speed limits on Seaside Way and Shoreline Drive (together with downtown feeder streets and parking lots) will be forgotten, replaced by the noise, vibration and harshness of proper racing cars.

While the first weekend for Formula DRIFT starts their 16th season April 5-6, the following weekend will be the fourth race for headlining NTT IndyCar Series. To prepare both the circuit and the drivers, the Acura Grand Prix of Long Beach held, as it does most years, a media day to help market the show.

The action was suspended at mid-day so that runners and walkers could take to the course to see what the drivers experienced – albeit with single, human-powered machines – themselves. On-track action was heavy from 9:45 in the morning until just after 3PM.

This reporter had the opportunity to take a ride in a street-legal Ford GT with Hand, whose smooth handling of this street course should serve him well during the Bubba Burger Grand Prix on Saturday afternoon. Joey Hand gave a full two-lap ride so we could take the Shoreline straight at optimal speed.

Later in the day, the chance to ride with three-time Formula DRIFT champion Chris Forsberg in his Nissan 370Z racecar came up. These cars stage on the back straightaway, Seaside Way and, when the series first began doing these rides, they didn’t have drivers do their customary warm-ups as they do when competing against one another.

Forsberg explained that the car’s rear tires always heat up quickly but it’s more difficult to get the fronts up to temp. Formula DRIFT decided it was best to give a proper ride to journalists by performing the traditional warmup of donuts/drifts to get all four tires to racing temp. That made all the difference on our ride, the best I’ve experienced in a DRIFT car.

One racecar on site that may or may not be racing in this weekend’s 16th season starter for Formula DRIFT is a Camaro built by Napoleon Motorsports with Turnkey Industries and David Sterrett. This machine is an all-electric, 3000-pound Camaro with a single motor and 30 small, four-cell batteries producing 420 volts and 384 Kilowatts (514BHP). Total weight of the batteries is 800 pounds, a heck of a lot more than an internal combustion engine!

The question of whether the Napoleon Motorsports/Turnkey Industries EL1 Camaro gets to race rests with the Long Beach Fire Department. They had questions; we have none. Presumably, the team has done its work over the past six months in building and prepping this race car for competition. The determination will be made (hopefully well) before Formula DRIFT begins practice on Friday morning.