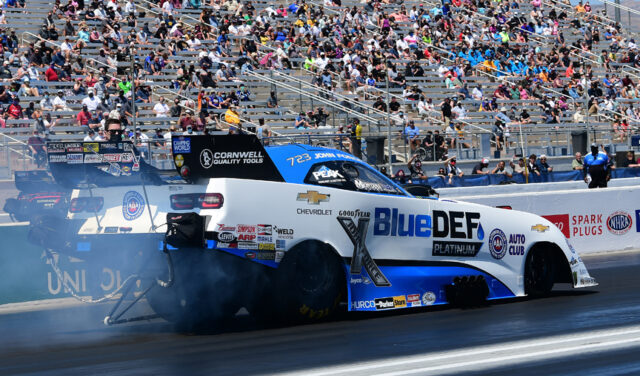 Believe it – 2020 was a year John Force would like to put in his rearview mirror. After the second race of NHRA’s Camping World Drag Racing Series season, he had to park his two Top Fuel entries for daughter Brittany Force and Austin Prock, together with his own Chevrolet Camaro SS Funny Car and that of then-reigning champion Robert Hight.

It wasn’t an easy choice for the 16-time champion who, in 2019, won the vaunted U.S. Nationals, even as he brought up the “R” word after that race, talking with the media about the probability that the icon’s long career was in its waning days. He knows it’s gonna happen, that the race boots, fire suit, helmet and gloves will get hung up for a final time. 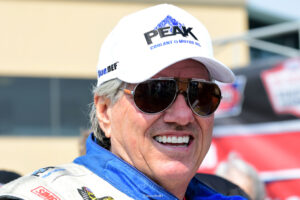 It’s just not that time yet, not when Force is notching even more victories, driving exceptionally well and moving his personal goalposts towards the possibility of a 17th title in Funny Car. Earning his 153rd Wally winner’s trophy at Epping, N.H. in the TascaParts.com NHRA New England Nationals presented by Bandero premium tequila against Hight, in their seventh final round meeting, Force’s John Force Racing team won its third straight race in 2021, showing the rust they might have accumulated during the pandemic is, officially, gone!

This latest victory, earned in the category’s 900th race during NHRA’s 70th anniversary season, gives John Force bragging rights for a couple of weeks before the show lands in Norwalk, Ohio. This win, Force said, “represents a team effort. You have to look at both of these cars and all the people that take care of me. That’s what it’s all about.” Force parlayed this result into second-place points, just 15 behind Bob Tasca III in first. 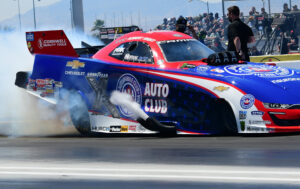 “Robert [Hight] helps me so much trying to help me back in the driver’s seat where I don’t suck so bad,” Force said after this latest victory. “Right now, I’ve got a car and I won today, and I did my job.” Force did his job from the No. 3 qualifying spot, making an initial run past Cory Lee’s Ford Mustang, vanquishing J.R. Todd’s Toyota Camry and getting the best of Terry Haddock’s Mustang to earn the right to face his company president, Hight, whom he defeated with a 3.972-sec pass to Hight’s 3.993.

Those efforts don’t look or sound like a guy on his way to the exit signs. Still, we must enjoy the sight and sounds of John Force while we are able to do so. Getting through 2020 without John, Robert, Austin and Brittany wasn’t all that much fun, was it?

1 Comment on Let’s Enjoy John Force While We Can