RacingJunk News > News > Learning About a Classic Offy and Its Owner 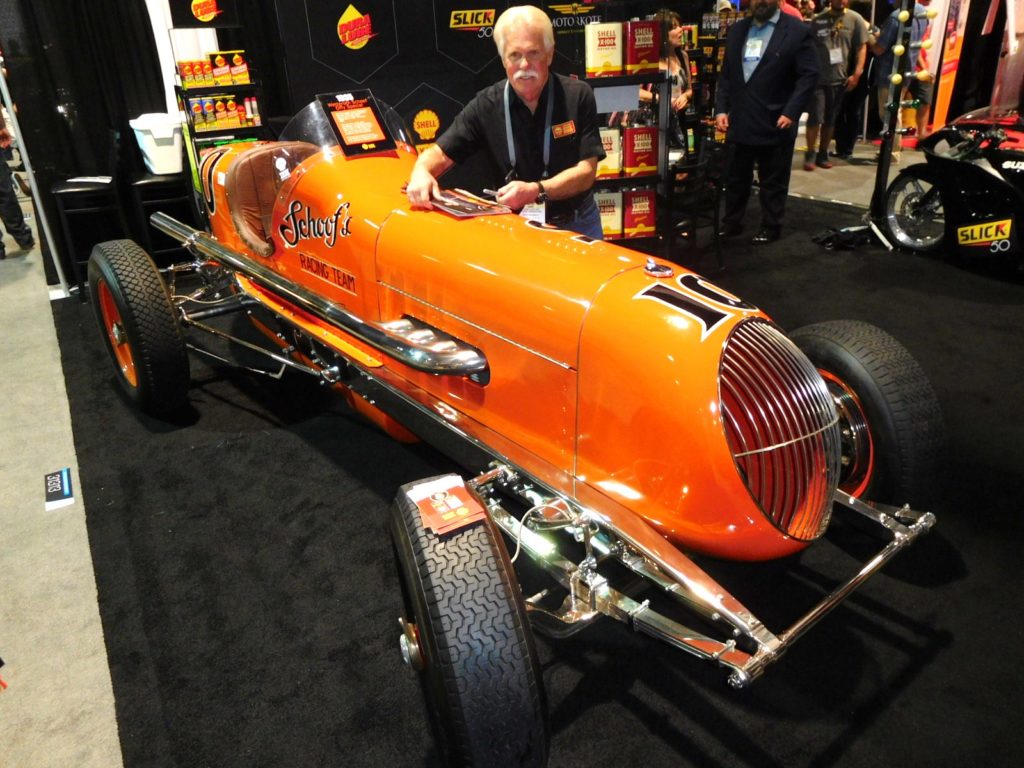 We were walking along at SEMA when we spotted a 1930s racing car that we thought deserved a closer look. A sign on the orange car described it as the 1935 Wettroth Schoof Offy Special. It was definitely one beautiful machine.

Now, we don’t watch television, so we didn’t recognize Wayne Carini, who owns the car. A Shell Oil PR guy told us who he was and said he was signing autographs for Shell. Enthusiasts we know have told us about Wayne’s TV show, called “Chasing Classic Cars.” They like the show, and after seeing the type of racing car Wayne owns, we can sense he is a real “car guy,” just like our friends.

Strangely enough, the 1935 Wettroth Schoof Offy Special has connections to our home state of Wisconsin, although it wasn’t built there. A West Coast fabricator name Louis Wetteroth — who went by the name Curly — constructed it around 1934. The next year it was purchased by William Schoof of Milwaukee.

Shoof ran in the national circuit until the end of 1949. He called it the ‘Fox Point Garage Special’ (Fox Point is a Milwaukee suburb) as well as the “Schoof Special.” He wrecked the car in 1948, and a number of other times, and then had it rebuild again. The car finished 10th in the 1949 Indianapolis 500 Mile Race. 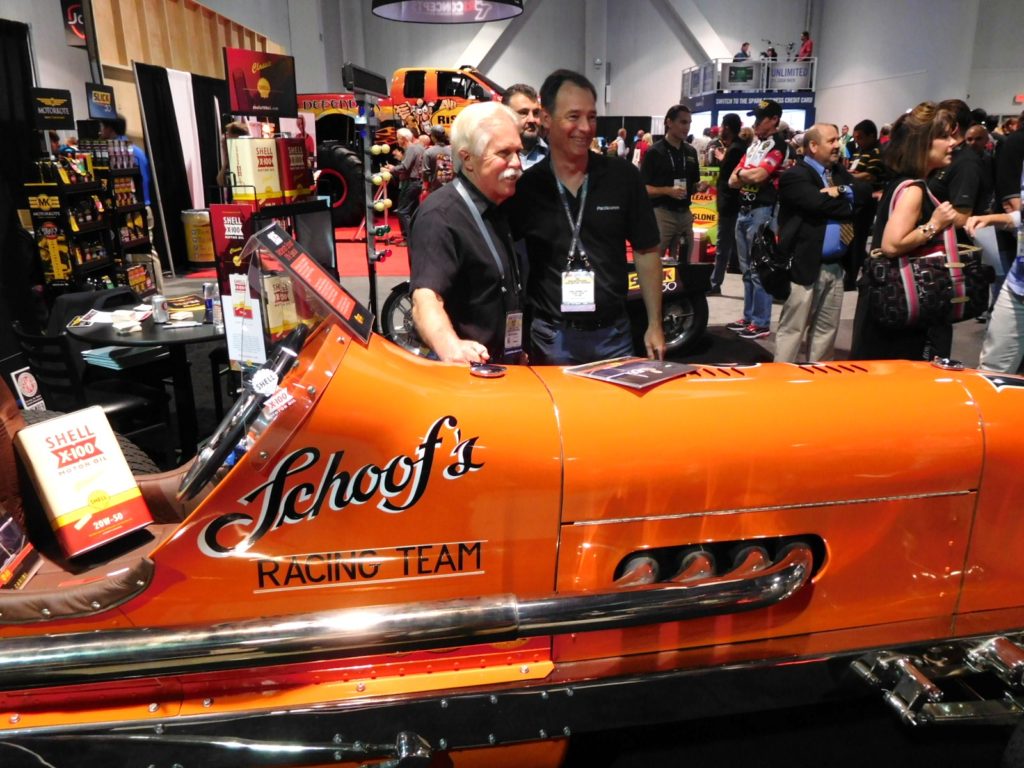 According to the sign on the car at SEMA, it has a 101-in. wheelbase, Houdaille shocks and many 1941 Ford parts. Power is supplied by a 270-cid 16- valve twin-cam engine that produces approximately 325 hp. The car has been restored to the way it looked in 1949.

In addition to learning about the Offy, we learned that Wayne Carini is a master auto restorer. He grew up restoring cars with his dad and continued in the field. He also sells classic cars through F40 motorsports. The Chasing Classic Cars show follows Wayne trying to uncover rare and exotic cars. A promotional write up says the show “welcomes you into the elite club of car restorers and collectors as Wayne buys, restores and sells vintage rides.” We prefer the picture of Wayne as a vintage racing car owner who’d bench race with any enthusiast. 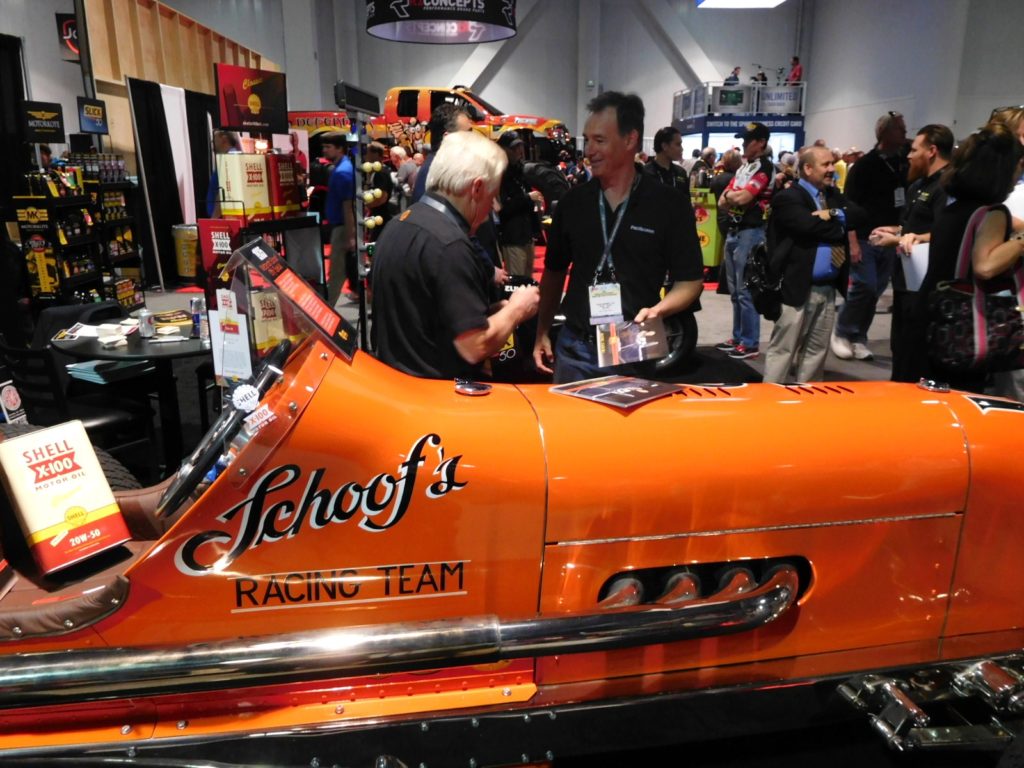 About John Gunnell 143 Articles
John “Gunner” Gunnell has been writing about cars since ‘72. As a kid in Staten Island, N.Y., he played with a tin Marx “Service Garage” loaded with toy vehicles, his favorite being a Hubley hot rod. In 2010, he opened Gunner’s Great Garage, in Manawa, Wis., a shop that helps enthusiasts restore cars. To no one’s surprise, he decorated 3G’s with tin gas stations and car toys. Gunner started writing for two car club magazines. In 1978, publisher Chet Krause hired him at Old Cars Weekly, where he worked from 1978-2008. Hot rodding legend LeRoi “Tex” Smith was his boss for a while. Gunner had no formal journalism training, but working at a weekly quickly taught him the trade. Over three decades, he’s met famous collectors, penned thousands of articles and written over 85 books. He lives in Iola, Wis., with his nine old cars, three trucks and seven motorcycles.