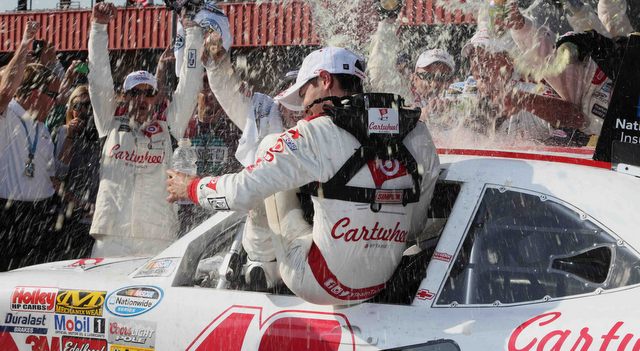 Kyle Larson (No. 42 Cartwheel Chevrolet) and his growing fan base got a little bit bigger on Saturday as the California native and 21-year-old held off a late-race charge by Kevin Harvick (No. 5 TaxSlayer.com Chevrolet) and Kyle Busch (No. 54, Monster Energy Toyota) to win his first NASCAR NNS race at the TREATMYCLOT.COM 300 at Auto Club Speedway.

Larson, who is from the Sacramento suburb of Elk Grove in Northern California, led 17 of 150 laps around the two-mile track for the after finishing second five times in 37 Series starts.

Larson’s first win was not only popular with the fans, but several drivers went out of their way to congratulate him after the race.

“That last caution I think I noticed a TV screen and saw my face and next to it it said, ‘five second-place finishes in the Nationwide Series’ and I thought to myself, ‘I am not getting another one,’ ” Larson said. “Those guys came at me hard and I thought, ‘Oh, no. Second again. But I was finally able to stop that streak.”

He added: “To have guys like Rick Hendrick, Kyle Busch and Chase (Elliott) come up and congratulate me after the race was great.”

Said Busch, who has won six of the last eight NNS races here: “It was a great battle there, a fun race the three of us going back and forth and trying to figure out who wanted to win the thing. Congrats to Kyle. There shouldn’t be anyone happier than the fans in the stands.”