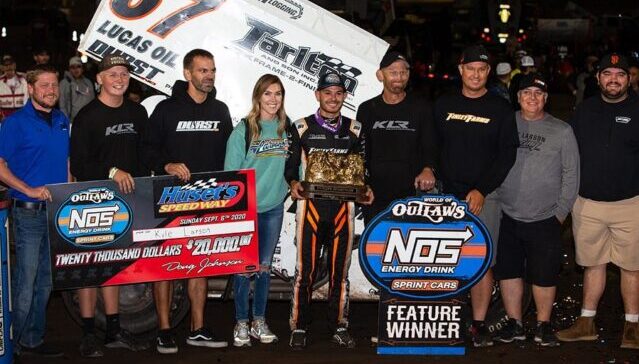 Kyle Larson has definitely been on a roll in the dirt racing world lately. With rumors swirling that the former Chip Ganassi Racing driver could potentially earn a new NASCAR Cup Series ride in the near future, the newest World of Outlaws NOS Energy Drink Sprint Car Series’ phenom is continuing to impress as he blows the doors off the competition in this series. While Larson has been on a roll over the last few weeks, this has not always been the case, especially at Huset’s Speedway. In fact, two times Kyle Larson entered Huset’s Speedway with winning potential and two times this historic track denied him the opportunity to earn the win. That is until Sunday night.

With $20,000 on the line, Larson was not about to let the past of crashing his car and being left in the dust. Keeping his car on all four wheels and tread on his tires, Larson methodically worked his way through the field to claim his first win at this challenging South Dakota track. 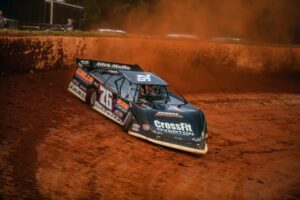 After starting the 35 Lap feature inside the Top 5, Larson was not really the driver to watch. In fact, few drivers could catch pole sitter Gio Scelzi during the first few laps of this race. Behind him, a war brewed for the runner-up spot between David Gravel, Larson, Kerry Madsen, and Carson Macedo. While Madsen made early attempts at stealing the spot from Gravel he failed to do so. Macedo was also successful in doing so for a few laps before falling victim again to Gravel after a failed attempt of trying to take the lead from Scelzi.

Following a crash that would leave Jason Sides spinning on the track, Larson would see his opportunity to take over. During this opportunity, Larson darted pasted Gravel for the runner-up spot on the entry to Turn 1. It was only a matter of time before the lead was at reach. Like many of his races over the past few weeks, Larson ripped to the top of the track, pushing his car to its limits. Doing so helped him gain on Scelzi but also caused him to lose ground when he hit the cushion the wrong way. He also did not have to work too hard to get back close to Scelzi after a caution did that for him.

With 11 laps to go, Larson found a straight shot off the corner and by the time they reached the flag stand, Larson was four car lengths ahead of Scelzi. From then on, Larson looked like he had just been playing with everyone. He pulled away to about a three second lead in five laps.

A caution with three laps to go set the stage for Larson to potentially lose another race at Huset’s. But this time, no one, and nothing, was going to stop him. He jetted away from the field on the restart and pulled away to the win – finally conquering the historic track.

“It feels great to finally get a win at this track,” said Larson. “The restarts weren’t working out for me early and I made a couple mistakes on some of the restarts, but I felt like that was a really smart move to take the top because we are starting to get good runs on the restarts starting up there and I am thankful for this.”

Larson would not be the only World of Outlaws dominating driver of the Labor Day weekend. Thanks to being in what many consider to be “his own backyard”, Evans, Ga. native Brandon Overton dominated both feature races at both Lavonia Speedway as well as at South Carolina’s own Lancaster Motor Speedway.

Beginning with a triumphant domination on Friday night, in his home state of Georgia, the driver everyone dubs as Big Sexy kept the momentum going on Saturday night over the boarder in SC.

After running second fastest in qualifying and winning his Team Drydene heat race, Overton redraw the inside of row two for the feature; behind the front row of local Johnny Pursley from Clover, SC, and Outlaw Ricky Weiss from Canada.

Immediately going to second on the start, Overton bided his time aboard the Wells Motorsports No. 76 before striking to take the lead from Pursley on lap 12. From there, it was game over. A few cautions tried to slow down his Clements Racing Engines powered Longhorn Chassis, but nothing could deter the 29-year old from another trip to victory lane. He commanded the final 38 laps with ease and cruised to a 3.012-second victory at the checkered flag.

“We have got one hell of a hot rod right now; this thing is a joy to drive,” Overton said in victory lane. “Everything is just going so perfect for us right now. We are really spoiled winning like this, because then you run bad and feel so horrible. These last couple of months have been amazing though, and I hope it doesn’t end anytime soon.”

The champions of the World of Outlaws NOS Energy Drink Sprint Car Series will be back at it next weekend, September 11-12, at Dodge City Raceway Park while drivers from the WOO Morton Buildings Late Models will get a bit of a break over the next two weeks. Stay tuned to RacingJunk.com for the latest in the dirt racing news.