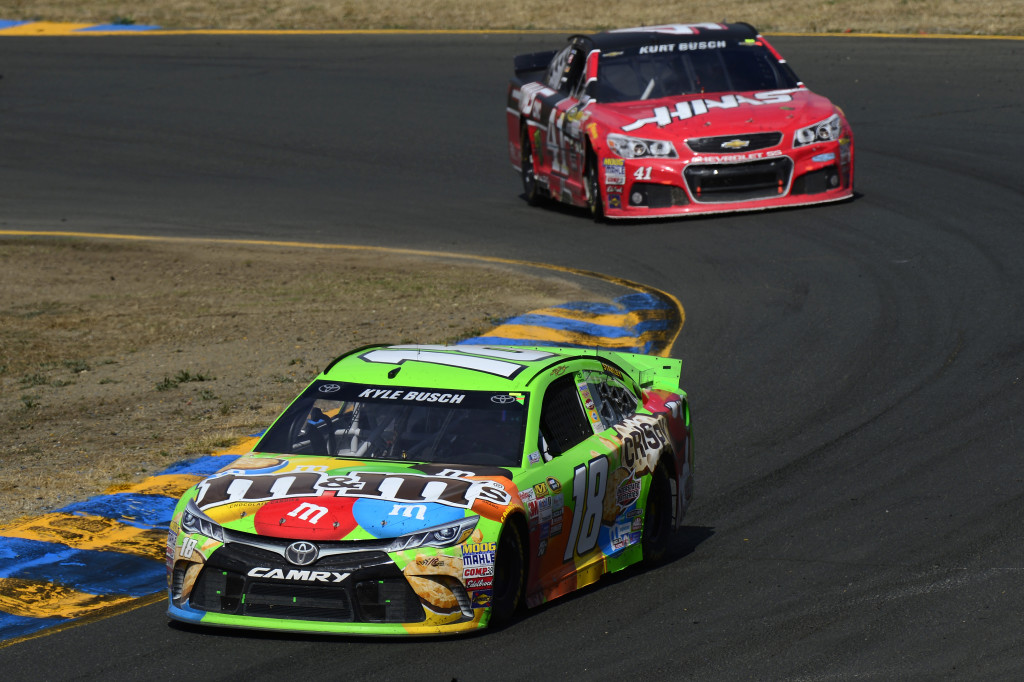 In only his fifth NASCAR Sprint Cup start since returning to the track after his Daytona injuries in February, Kyle Busch raced to the front of the pack after a late race caution flag to win the Toyota/Save Mart 350 on Sunday at Sonoma Raceway.

Busch, driving the Joe Gibbs Racing M&Ms Crispy Toyota, restarted seventh when the race went back to green with eight laps to go because of Casey Mear’s broken axle.  He was the second driver with fresh tires, having Clint Bowyer just ahead of him after the final round of pit stops.

Busch got past Bowyer three turns after the restart and then picked his way past five cars with seven laps remaining, setting his sights on leader, Jimmie Johnson.  Johnson decided to stay out on old tires for track position.  Busch held off his brother, Kurt, for the win Sunday at Sonoma, his second-career win at the California road course.

Kurt Busch got past Bowyer with a few laps to go, but could not get close enough to his brother’s back bumper to make a challenge for the lead.

“Yeah, it was a fun race today,” said a smiling Kyle Busch in the post-race press conference.  “I actually had a lot of fun racing out here at Sonoma.  Normally it’s kind of a nightmare for us sometimes and this 18 team, but we had a great day today.  Coming down pit road and having the cautions fly as we were in the pits twice certainly is so beneficial at this racetrack.  It just gets you such great track position and out front.  That was a huge benefit; just being able to come down when we did and to be able to have that strategy work out for us was awesome.”

“I was trying to figure out if we’d ever finished 1-2 before, and today we did it,” Kurt Busch said.  “Now I wish I’d gone up there and moved him.”

“He certainly made it hard on Clint and gave me some ground,” the younger Busch said.

Bowyer finished third and said once Kyle Busch got past him on the restart, his shot at the win was over.

NASCAR granted Kyle a waiver upon his return that made him Chase eligible should he qualify, and Sunday’s victory was the first step.  To use the win toward competing in the championship Chase, he still needs to be in the top 30 of driver points by the conclusion of the 26th race of the season at Richmond.  Presently, he is 37th.

The win is the 30th of Busch’s career, tying him with Kevin Harvick for 23rd on the all-time list.

Harvick finished fourth, followed by Joey Logano and finally Johnson, who led twice for 45 laps before fading to sixth after the final restart.  Dale Earnhardt Jr. was seventh, followed by Hendrick Motorsports teammate Kasey Kahne, while Ryan Newman and Sam Hornish Jr. rounded out the top 10.

The Toyota/Save Mart 350 average speed was 74.774 mph with nine lead changes among five drivers and five caution flags for 21 laps.

Next weekend, NASCAR will celebrate the 4th of July at Daytona International Speedway for the running of the Coke Zero 400 next Sunday evening on the NBC network.