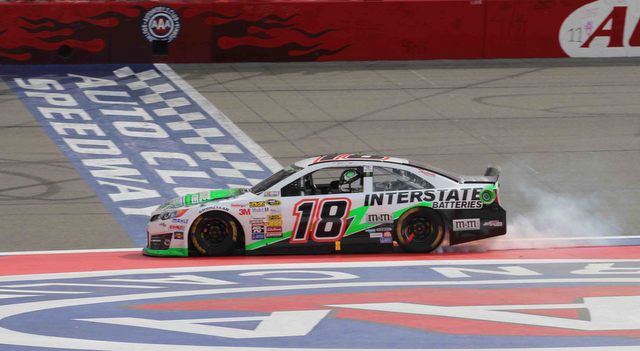 Busch (No. 18, Interstate Batteries Toyota) held off rookie Kyle Larson (No. 42, Target Chevrolet), Tony Stewart (No. 14, Rush Truck Centers/Mobil 1 Chevrolet) and his older brother Kurt Busch (No. 41, Haas Automation Chevrolet) in the wildly exciting finish in a race that featured a record 35 lead changes. A sold-out and enthusiastic crowd watched as Grand Marshal Gonzo of the Muppets started the race by directing drivers to start their engines.

“What an awesome race this track produced two days in a row,” said Busch, who held off Larson by 0.214 seconds in a green-white-checkered finish. “I can’t believe it. Thank the Lord for getting us locked in the Chase.”

The win for Busch, who held the lead twice and started 14th, was his third career win at Fontana and marked the fifth time in five races a new winner has emerged this NASCAR season. It was his 29th career Sprint Cup victory.