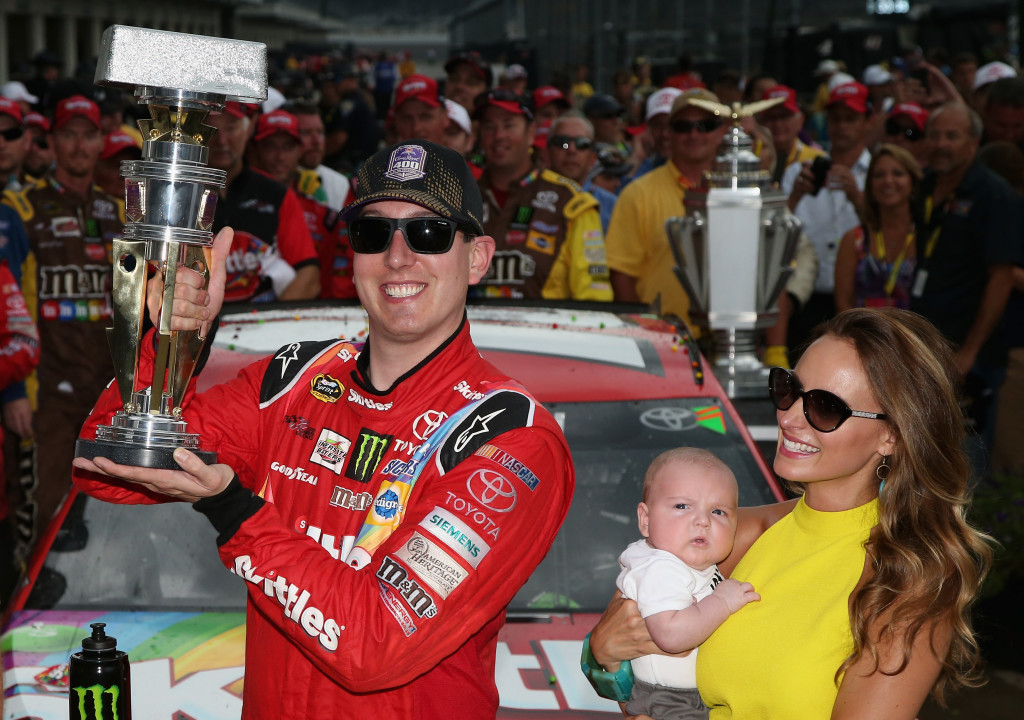 Kyle Busch kept his streak alive Sunday, winning the prestigious Crown Royal 400 trophy at the Indianapolis Motor Speedway with one of his strongest performances to date.  He earned his 33rd Sprint Cup title and it appears there’s no stopping him and his Joe Gibbs Racing Skittles Toyota team.

Joey Logano and Kevin Harvick didn’t make it easy on Busch, though, attempting to overtake him on the last three restarts, but couldn’t find the speed, finishing second and third, respectively.  The caution flag waved three times in the last ten laps, eventually leading to a Green-White-Checkered finish.  Busch led only three times for 19 laps with Harvick leading the most for 75 circuits.

“You know, I’ve definitely seen that movie before,” said Busch, who had a mirror full of Logano beating him by .332 of a second.  “I think every single Saturday race here we’ve had a late restart and I’ve lost the lead every single time, but in the two that I’ve won I’ve gotten the lead back.  Two years ago I got it back from Brian Scott; pretty much right after the restart, but then yesterday I didn’t get it back until the white flag and coming back to the checkered.  You never know how it’s going to play out, but man, it’s so hard to win these things, and once you can get a guy out front and get him in clean air, typically you see that guy kind of stretch it and I knew if I could just protect the bottom — Joey was fast.  He drafted on me a couple times, but if you just protect that bottom and not let that guy get a chance inside of you you’re really going to mess him up, and that’s what I had to do in order to win this thing today.” 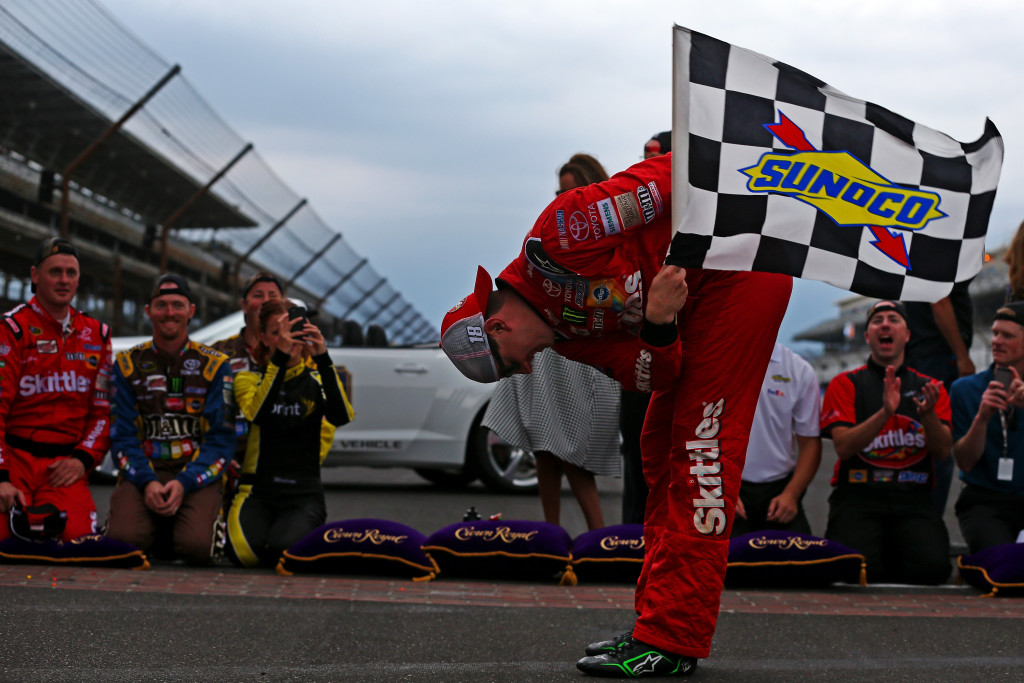 In his dominance at the Brickyard, Busch became the first driver to win both the Xfinity and Sprint Cup races the same weekend, giving Toyota its first Indy win while ending Chevrolet’s 12-year run. He also cut his margin to 23 points with six races to go to reach the coveted No. 30 position in the driver standings, gaining entry into the Chase to the Championship.

“Yeah, once we become Chase eligible, which hopefully we will here shortly… then all we’ve got to think about is those final 10 races and how to win one of those races in each round, pick out the best ones.  You’ve got to win a race in each round just to get that automatic go to the next round, so in case something bad does happen and in my Chase successes, there’s always something bad that happens.  So I’m well aware of that.”

Jeff Gordon lost his chance at a storybook finish at IMS 50 laps into the race.

Gordon made contact with the wall trying to avoid Clint Bowyer and suffered significant damage to his car, heading to the garage for repairs.  Gordon eventually returned to the track but finished 42nd.

“I was underneath Kasey Kahne and we were just racing for position,” Gordon said after stepping out of his car in the garage.  “I saw Bowyer get sideways.  I don’t know what caused it.  Me and Kasey were trying to check up to avoid it.  I don’t know if he got loose or we just both got loose together.  Then I just lost control and got in the wall.” 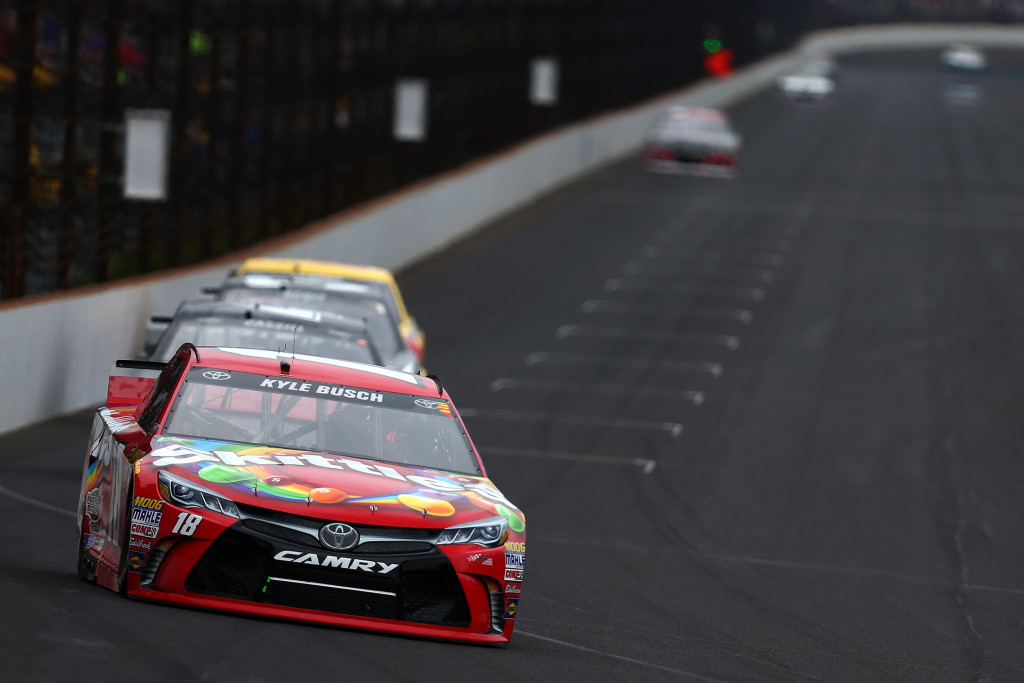 Tony Stewart spent the early portion of the race near the front, finished in 28th position, one spot behind teammate, Danica Patrick.

Busch won with an average speed of 131.656 mph.  There were 16 lead changes among six drivers with nine caution flags for 36 laps.

The Sprint Cup series now goes to the Pocono Mountains for the Windows 10 400 next weekend at the Pocono Raceway on Sunday, August 2, at 1 p.m. EDT on NBCSN. 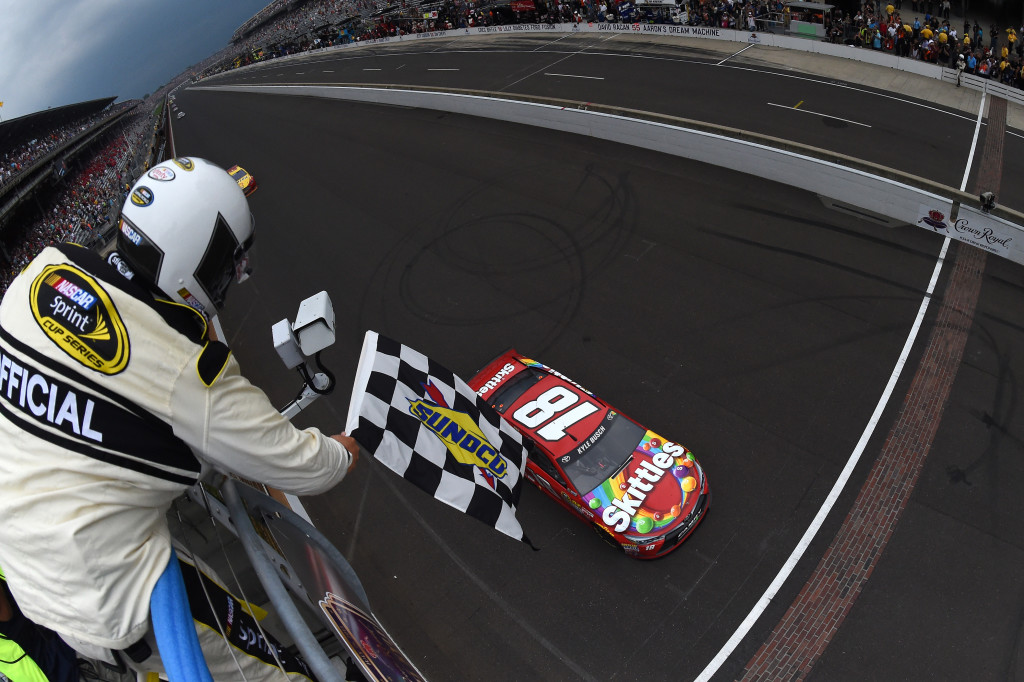