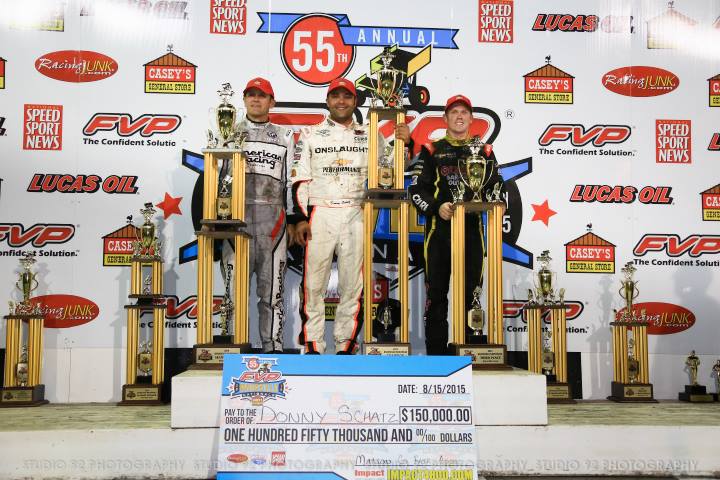 All photos courtesy of Knoxville Raceway

Saturday night’s big race held another big victory for now nine-time winner Donny Schatz.  Since 2006, Schatz has won all Knoxville Nationals, except for 2010 when Tim Shaffer took the trophy.

Kerry Madsen had a hopeful ride for most of the race, sticking close behind Schatz and hoping for a little slip-up to help get him into the lead.  Schatz held onto the lead for the entire race, leading all 50 laps.

“I sat on his tail tank, I felt like, for 20 laps,” said Madsen.  “I just felt if I was really patient and waited for the correct opportunity, it would present itself.  And he didn’t make a mistake.”

Prior to the beginning of the race, the drivers saluted the grandstand with a 4-wide salute, and the audience lit up the grandstands with flashlights and cell phones.

“They have so much experience now and he drives these races so perfect, it’s getting harder and harder [to beat him].  That’s why he wins every year,” said Brad Sweet, who finished third.  “Until someone figures a little bit out, makes a better decision and drives their car a little bit better, you’re just not going to beat him.”

However, the Knoxville Nationals were not as exciting and happy for everyone.  During Thursday night’s qualifying heat races, Kevin Swindell’s car flipped and landed hard on its wheels after tangling with other cars, and he was airlifted to Mercy Medical Center in Des Moines.  As of now, it is only known that he sustained a “significant injury” and is having surgery.

Swindell is the son of former sprint car driver Sammy Swindell, and is a four-time winner of the Chili Bowl and a winner of 77 races in various forms of racing, including the World of Outlaws.  His father made the decision to race on Saturday night.