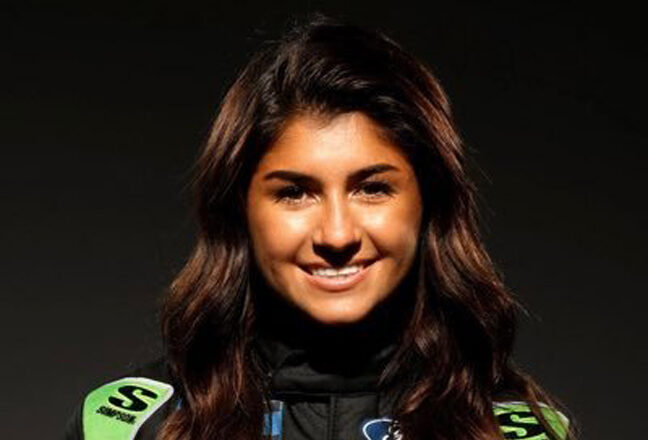 The Camping World SRX Series, a six-race superstar campaign scheduled to begin June 12th at Stafford Motor Speedway in Stafford Springs, Connecticut, is already having scheduling conflicts for some of its drivers.

2004 INDYCAR champion and 2013 Indy 500 winner Tony Kanaan was listed as a full-time SRX racer, but has conflicts for two of the events, on the dirt at Knoxville (Iowa) Speedway June 19th and at Slinger, Wisconsin’s Speedway on July 10th. Those conflicts forced Stewart and co-founder Ray Evernham to search for a suitable substitute.

They found one in Hailie Deegan, 19, currently racing the NASCAR Camping World Truck Series. Deegan has plenty of dirt-racing chops, having been raised in Temecula, California, a hot-bed of off-road competition. “It’s an honor to be a part of SRX and I’m grateful for the chance,” Deegan said. “I love racing. I started when I was eight in the Lucas Oil Off-Road Series and, for the last five years, I’ve been on pavement working my way up the racing ladder.

“The challenge of SRX really appeals to me,” Deegan continued. “Competing on different tracks – asphalt and dirt – with other drivers from all sorts of disciplines, is a unique opportunity that doesn’t come around every day.”

Evernham allows that he’s disappointed Kanaan isn’t available for these two contests, but realizes that “Tony Kanaan is going to bring a lot to the Camping World SRX Series,” Evernham said. “We’d love to have him for all six races, but we’re also not going to complain about having him for four. It did, however, allow us the opportunity to find another strong personality who has shown that she’s not afraid to race door-to-door for the win. Hailey Deegan has the opportunity to win against some of the biggest names in motorsport.”

Kanaan will be on hand for next weekend’s series-starting contest, and will race June 26th at Eldora Speedway (Rossburg, Ohio), July 3rd at Lucas Oil Raceway outside Indianapolis and, finally, July 17th in the Nashville, Tennessee season finale on the Fairgrounds Speedway. “I feel like other people driving my car is the story of my season,” Kanaan reflected. He’s sharing a car in the NTT IndyCar Series with seven-time NASCAR Cup Series champion Jimmie Johnson at Chip Ganassi Racing, with Kanaan driving the ovals (he finished 10th in the Ind 500) and Johnson racing the street and road courses.

“Obviously I want to race the full SRX schedule, but I have two commitments I cannot break. I really appreciate everyone’s flexibility, because when I first heard about SRX, I was the first one to raise my hand and loudly say I wanted to be a part of it. I’m happy that Hailie Deegan gets to enjoy this experience too, because it really is a great opportunity for all of us.”

Stewart and Evernham have also called up ringers for select races: NASCAR veteran Greg Biffle is competing at Stafford and Slinger while five-time Rallycross champ and former Formula One and NASCAR competitor Scott Speed is racing at both Eldora and Lucas Oil Raceway. All Camping World SRX Series races are being broadcast live at 8PM ET on the CBS television network. Live streaming is available on Paramount+.