Ed Carpenter Racing (ECR) is an anomaly in the Verizon IndyCar Series.

Team owner Ed Carpenter is the sole owner/driver in the series and, in a twist, he races only the oval contests on the 17-race calendar. For the eleven street and road courses that are predominant in the schedule, Carpenter has, since the 2014 season, hired a specialist to race his No. 20 Fuzzy’s Ultra Premium Vodka Chevrolet, in order to bring home the best result. ECR’s second, No. 21 car has a single driver for all road, street and oval races throughout the season.

For the past two years, Ed Carpenter Racing’s No. 20 team utilized the road/street services of Spencer Pigot, 24, the former Indy Lights champion who takes over the full-time, full-schedule seat for ECR’s No. 21 in 2018, while former FIA F2 Championship racer and Manor Marussia F1 development driver Jordan King, a Briton who turns 24 just before the season begins, gets Carpenter’s nod to contest the road/street courses in the No. 20 Chevy.

King came up through the UK’s ladder series, starting in karts, moving to Formula Renault 2.0 and Formula Palmer Audi and then on to the FIA’s F2 series. From there he joined Racing Engineering alongside 2016 Indianapolis 500 champion Alexander Rossi in 2015, contesting the FIA’s GP2 series and finishing 12th overall. 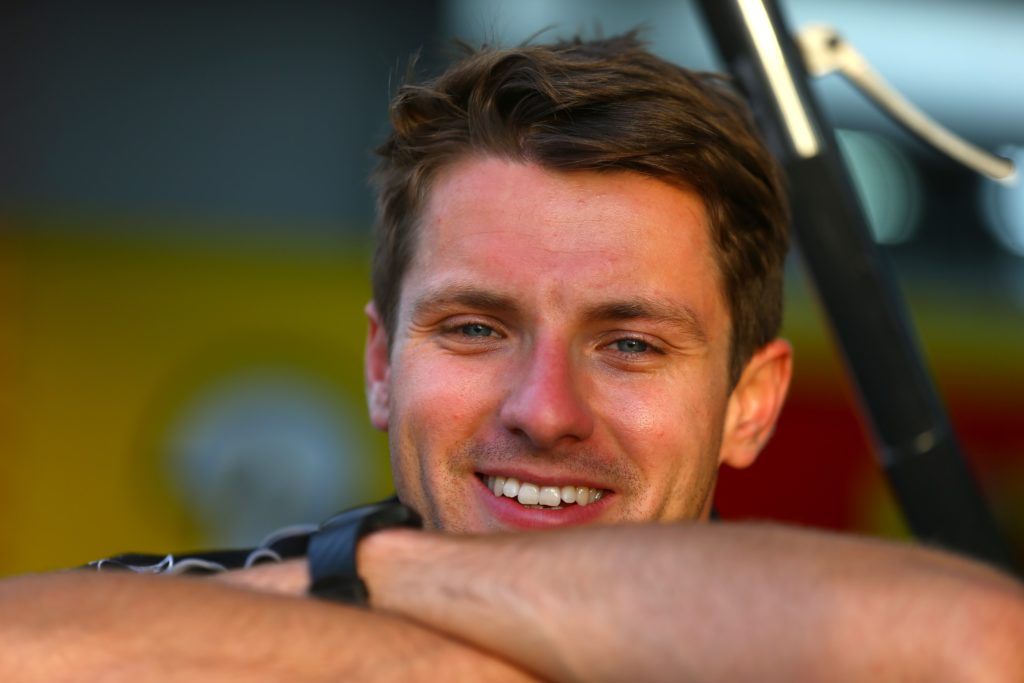 That same year, he served as development driver for Manor Marussia’s Formula 1 team, who retained King in 2016 to do developmental testing, allowing him to participate in free practice at the 2016 USGP in Austin and at the Abu Dhabi season finale. Among the teams that have shown faith in King’s abilities, Manor Competition has worked with the UK driver since 2010 and Carlin – now an INDYCAR entrant – helped him secure his British F3 title in 2013.

Carpenter believes that King’s entry to INDYCAR comes at an excellent time, when a new, universal aero kit is being used for the first time. This 2018 move, the series hopes, will allow newer drivers to learn the revised cars alongside veterans, perhaps evening the playing field.

“I first met Jordan at Sonoma Raceway in 2016, as he was exploring opportunities in INDYCAR,” Carpenter said. “He is a very motivated, intelligent and hungry driver, which is exactly what we’re looking for at ECR. Jordan has had a lot of success and experience in Europe and I can’t wait to see what he is capable of with ECR in the Verizon IndyCar Series.

“It’s a good time for Jordan to come in just because he’s going to have a lot learn about a new car and the tracks, but now there’s going to be a bit of a reset for everyone from how you drive, to what the cars need from a setup standpoint. It’ll put him on a little more equal footing than if he was coming in where we’ll all picking up where we left off the year before.”

Jordan King will be a true rookie in INDYCAR’s premier series, never having driven any of the tracks on which he will compete in 2018. As an F1 developmental driver, though, he’s been accustomed to using simulators, and that should ease his indoctrination period. He’ll also have extra Firestone tires available to him at all venues so that he can take added laps in practice as he prepares for each of his 11 races.

“Sharing the No. 20 seat with Ed gives me a great opportunity to learn from him and the team, while racing at the road and street courses will let me put into practice what I have learnt,” King said. The FIA Institute’s 2015 Driver of the Year and 2013 British Formula 3 champion is “really looking forward to having the opportunity with ECR to work towards our collective goals. I believe that, together, both of us have the capability to do well,” King added.

One benefit the young Brit has is his access to the knowledge base of his management company, MB Partners, run by former PacWest Racing driver Mark Blundell, who raced in CART/ChampCar. MB Partners is the management team for Mike Conway, who drove with ECR in 2014. A great mentor with intimate knowledge at many INDYCAR venues, Blundell believes King’s 2018 program will serve him well in his goal of becoming a full-time INDYCAR racer.

“The focus for Jordan was to give him a platform to build from in INDYCAR and the opportunity with Ed and ECR is the perfect fit,” Blundell stated. “Having a full road and street course program alongside some oval testing will allow Jordan to show his race craft and ability in some of the most competitive open wheel racing in the world today.”

It’s been a busy winter for ECR as they prepare for the upcoming 2018 INDYCAR season that begins March 11 on the streets of St. Petersburg, Fla. In addition to hiring King, the team has moved from its previous Speedway, Ind. location to the former Forsythe Racing workshop site north of Indianapolis Motor Speedway.

Jordan King is currently scheduled to undertake his first test in the No. 20 Chevy on February 5 on the Sonoma Raceway road course, joining an already-extensive off-season testing program that began as soon as the team received its new universal aero kit.