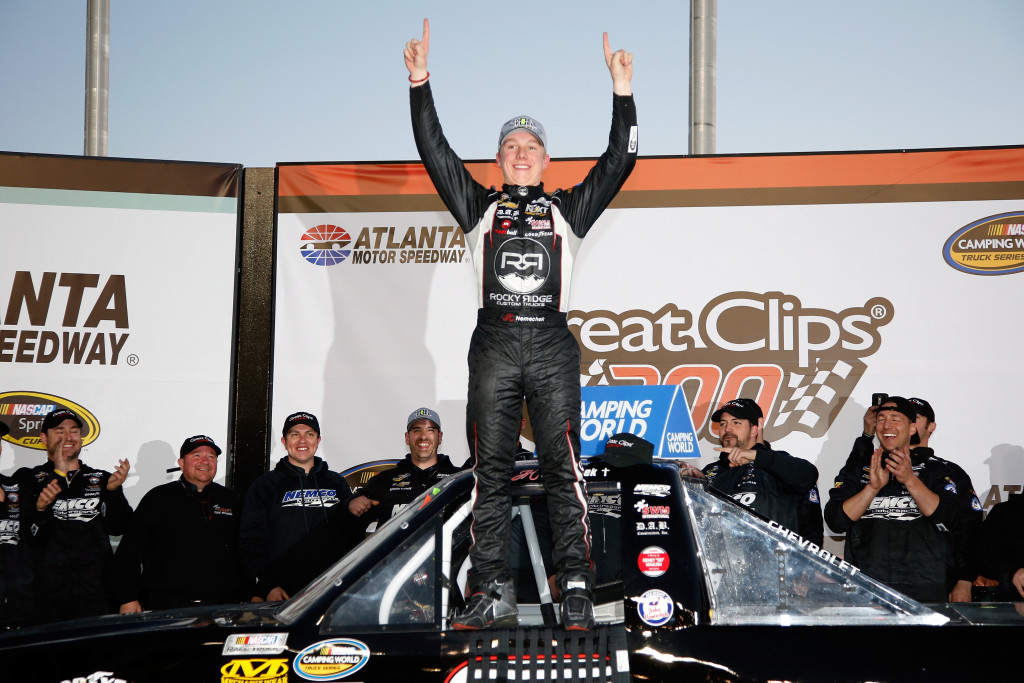 The Great Clips 200 NASCAR Camping World Truck series at Atlanta saw a young 18-year John Hunter Nemechek distance himself from Cameron Hayley after a two-lap dash on the last restart to claim his second win of his career in his first race ever appearance at the Atlanta Motor Speedway.  It also added Nemechek’s name into contention for the Chase Round of 8 that starts at New Hampshire in September.

The series of events building up to the last lap sprint happened with 18 laps to go when then leader, two-time Truck champion Matt Crafton, was battling Daniel Suarez.  Just as the pair was coming off turn two, challenger Christopher Bell, running third, nudged Suarez sending him right into Crafton with both cars spinning wildly.  Crafton slammed the outside SAFER barrier while Suarez spinned, hitting the inside wall.  Bell was lucky at the time to evade the melee and had assumed the lead after the accident brought out the Red Flag.

Coming down with 15 laps to go, the Truck field took the green with Bell quickly building up what appeared as an insurmountable lead appearing to be heading to the win.  Suddenly coming down with seven laps to go, his right front tire exploded, taking him completely out of contention after nosing into the outside wall on the front stretch, placing second place runner, John Hunter Nemechek into the lead on the caution. 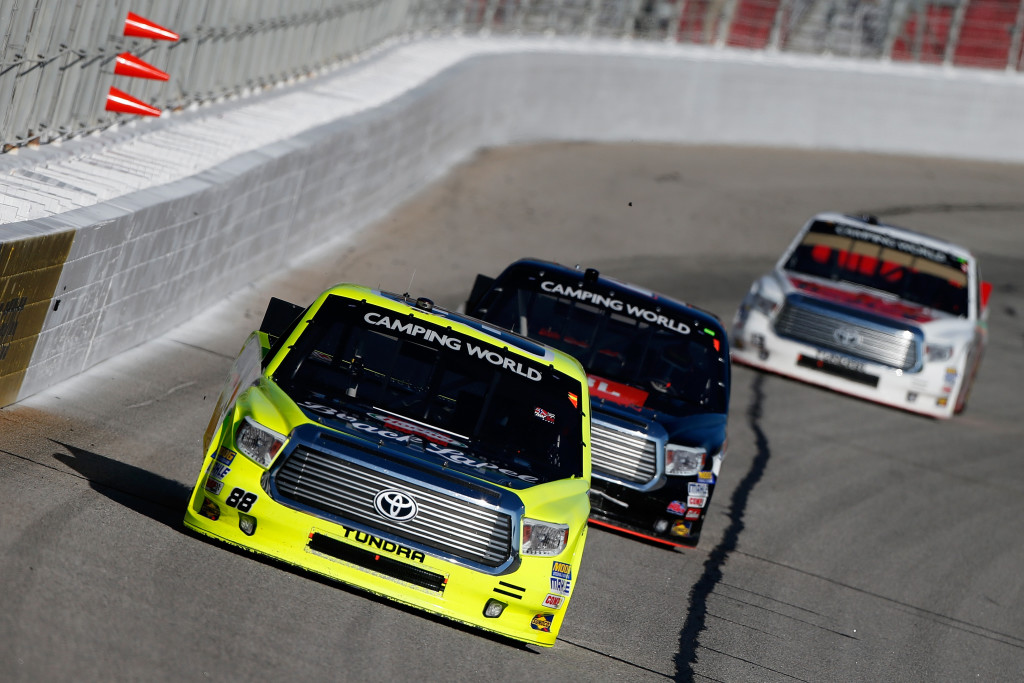 When the green waved again with two laps to race, he took the inside line with John Wes Townley on his outside.  Townley spun his tires, severely stacking up the outside line of cars and allowing Nemechek to rocket to the lead and unopposed crossing the finish line first by .305-of a second over Hayley.

“I’ve got to give a shout-out,” said a happy Nemechek.  “I can’t thank Kevin Harvick enough.  I went and sat with him for about 30 minutes to an hour last night, trying to learn everything I could.”

Obviously, it was some sage advice and the patience that Nemechek showed put him in a perfect spot to win his second Truck race and second at a 1.5-mile oval, capturing his first win at Chicagoland Speedway last September on fuel mileage.  That scenario didn’t come into play on Saturday with Nemechek powering his way over the field. 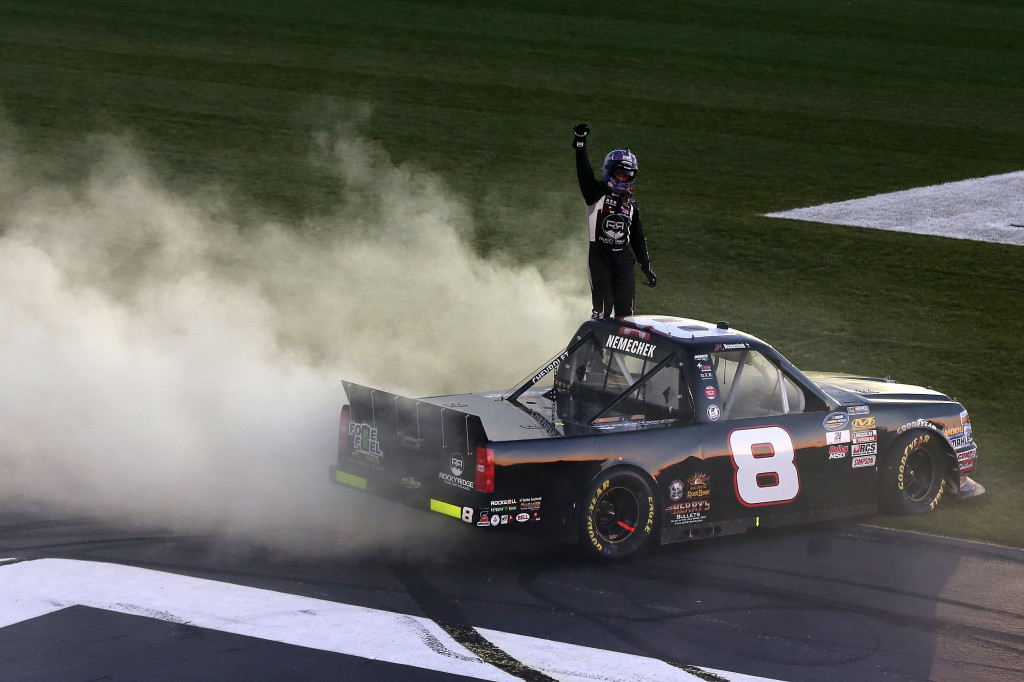 “I would say the pit crew won it for us today,” said Nemecheck, whose crew is headed by Gere Kennon enlisted the assistance of Jimmie Johnson’s pit crew for the event.  “I can’t thank those guys enough.  They gained us, I think, 13 spots overall on pit road.  It’s an unsponsored truck, again.  That’s two times in the winner’s circle for us.”

The Great Clips 200 had an average speed of 121.15 mph being slowed down for five caution flags for 25 laps.  The race had seven lead changes among four drivers, seeing Matt Crafton out front for 76 laps before his racing accident. 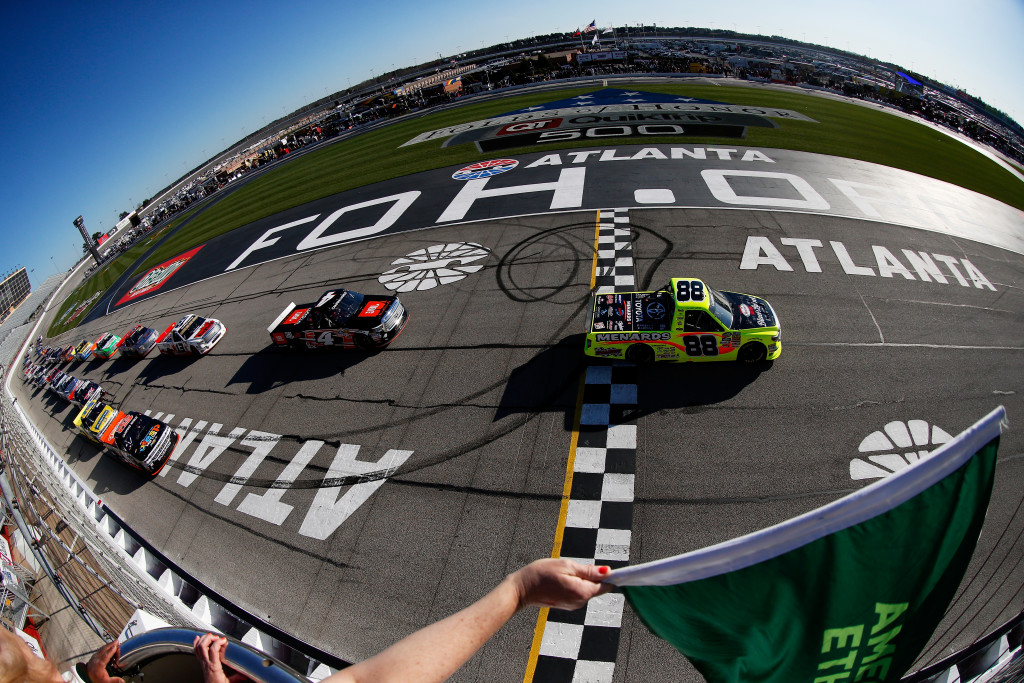 After the completion of two NASCAR Truck events, newcomer Parker Kligerman has a one-point lead over Daniel Hemric and three over Nemecheck in the Truck series.

The next Camping World Truck series race will take place on April 2, for the Alpha Energy Solutions 250 at Martinsville Speedway.