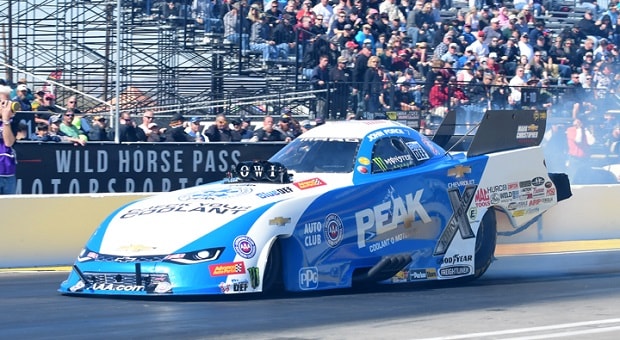 As with Brittany Force’s Top Fuel whack of two walls in Pomona just two weeks ago, this weekend’s horrific crash by her father, 16-time NHRA Funny Car champion John Force, caused more damage to the two cars involved than it did to either driver.

The 148-time NHRA national event winner was taken to a nearby hospital once removed from his Chevrolet Camaro SS, but was released by late afternoon Sunday, able to return to Wild Horse Pass Motorsports Park to congratulate his youngest daughter Courtney, who ended nearly a two-season drought with her victory in the class at the 34th annual NHRA Arizona Nationals.

Much like his near-fatal crash with Kenny Bernstein at Dallas’ Texas Motorplex in 2007, John Force’s blower explosion at the finish line’s 1,000-foot mark released his PEAK Coolant & Motor Oil Camaro’s body as it careened cross-track and contacted Jonnie Lindberg’s Toyota Camry. The duo’s parachutes tangled and they moved together to the opposite side of the track. NHRA’s Safety Safari was on-site before either Funny Car had stopped.

The 68-year-old Force was helped to the ambulance and then the hospital for his evaluation. Lindberg was uninjured in the crash. As he did when Brittany had her accident, John Force praised the work that’s been done to increase safety in these 10,000-plus horsepower racecars; since the March 2007 death of team driver Eric Medlen, safer chassis construction, head and neck restraints, better helmets and other passive safety restraints have allowed more drivers to walk away from explosions and subsequent crashes of this nature.

After a blown tire caused his 2007 crash, John Force was airlifted to the hospital, spent six hours in reconstructive surgery and several months doing intensive rehabilitation before returning to NHRA Funny Car competition in 2008. Two of his record-breaking 16 championships came after that crash; John Force has continued a rigorous training schedule that likely helped him better survive this explosion and crash.

Still, for the life-long racer, “This was a great day for John Force Racing. Brittany came back from a crash at Pomona and won her first round; Courtney won Funny Car for Advance Auto Parts. My struggles continue,” Force said, “but I’m a big boy. I’ll fix it.”

Courtney Force, who was visibly shaken when her older sister crashed her Monster Energy Top Fuel dragster in Pomona, is discovering just how strong she is as members of her family crash around her. After winning her first race since Houston 2016 – nearly a two-year span – Courtney Force said her team told her, “You don’t have to get back in this race car if you don’t want to,” following her father’s accident.

“I told them I’m good; let’s get down there and have a good run and just take it round by round. It’s the same race car we’ve been running,” she said. “You just have to block out all the mental noise of that and know this is the race car you know how to drive. [Matt] Hagan came up to me and said, ‘You’re a great driver and you know how to do this. Just clear your head.’ It was kind of nice to hear that.” 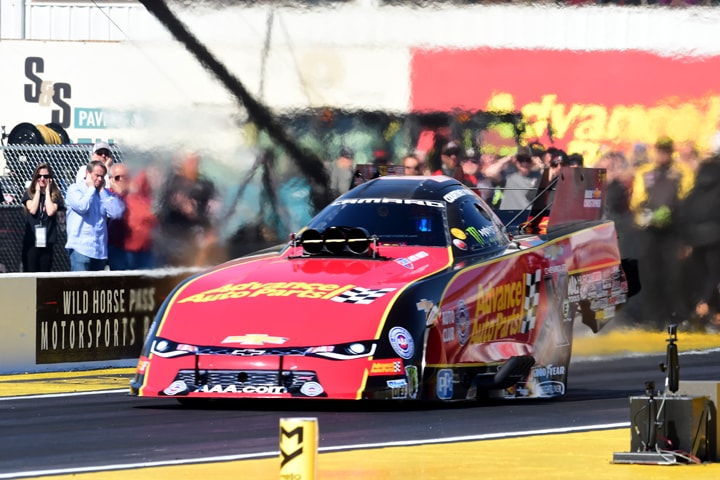 After the No. 1 qualifier easily beat Hagan, she had a bye in the semifinals as her father was unable to answer the call – they were on the same side of the elimination ladder. Force, married to Verizon IndyCar Series star Graham Rahal, raced Don Schumacher Racing’s Tommy Johnson Jr. in the finals, gaining her ninth pro victory. Johnson had his own massive explosion in Saturday’s first qualifying session and was seeded sixth for eliminations. He defeated Hight, newcomer Richard Townsend and former Top Fuel standout Shawn Langdon to reach the finals.

Two weeks ago, after Brittany had her accident, team president and reigning two-time Funny Car titleholder Robert Hight went to the finals, falling to Matt Hagan. This weekend, it was up to Courtney Force to carry the family brand forward. Although her team had only 40 minutes to prep the car and no time to start it prior to the semifinal bye run, and despite the fact she didn’t have lane choice for the finals, “I had the utmost confidence to get in the car today because of the job my team does on it, so to get a victory at this race and take home a Wally at the end of the weekend is pretty incredible.”

The Phoenix track was difficult for everyone in the NHRA pro ranks. After qualifying in downright cold and windy conditions, conditions were much different on race day. There was sun, the track was warmer and it was difficult for the crew chiefs, who didn’t have the usual data for the type of conditions they were seeing, to get a handle on the strip.

Everyone gets a couple of weeks to heal before the third race of the season, the Amalie Oil Gatornationals in Gainesville, Fla., March 15-18. In the John Force Racing compound, the R&R is pretty much a necessity.