FULL STEAM AHEAD FOR FORCE ROLLING INTO VEGAS 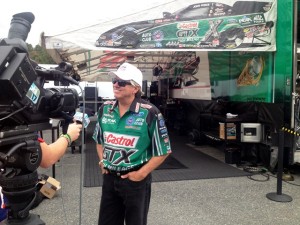 With only two NHRA national events remaining this season, John Force will be going at full speed and it’s pedal to the metal when he gets strapped into this 8000 horsepower Castrol GTX High Mileage Mustang during this weekend’s 14th annual NHRA Toyota Nationals. After getting bumped from the top spot by arch rival Matt Hagan earlier this month in Reading, PA, the 16-time NHRA Mello Yello champ has not lost focus despite some recent changes and announcements within his racing dynasty. When it comes time for Sunday’s eliminations, Force won’t be glancing in the rearview mirror, but rather will be looking right down the groove of The Strip at Las Vegas Motor Speedway.

“I don’t want to go to Vegas and have to spend my days there explaining to the media what’s taking place. I don’t want to have to do it at the final race at Pomona. We’ll be making announcements at Las Vegas. We’ll be making announcements in SEMA and right on through the winter, right up till opening day at Pomona,” he said. “Financially, I even dipped into my savings like I’ve done before, my wife and I, two and a half million dollars. With that, I have the budget if no more sponsors come onboard, but I’ve got calls this morning and yesterday. Things are looking good. I hope not to have to invest that money, but I will if I have to. That way, my four teams can race. I have a love and passion for NHRA. I feel I owe NHRA. I owe the sponsors, and I owe the fans to race,” said John Force.

With the recent departure of crew chief Jimmy Prock, Force is undaunted in his quest for his 17th NHRA Funny Car title. At a time when most drivers and team owners would be rattled, especially with only two races left in the 2014 NHRA Mello Yello Countdown to the Championship, it’s business as usual for Force and the Castrol GTX High Mileage team. 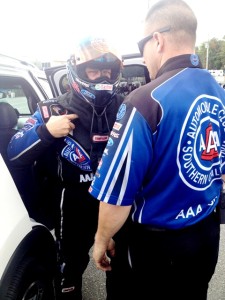 In 2009 Robert Hight drove to the winner’s circle at the Toyota NHRA Nationals and essentially wrapped up his first Mello Yello Funny Car championship. He started in the Countdown in 10th place and in two races he overcame a 110 point deficit to move to the top of the standings. This year at the 14th annual Toyota NHRA Nationals at The Strip at Las Vegas Motor Speedway Hight will need some help from Lady Luck to reel in his competition. Sitting in the No. 5 spot in the points and 135 points out of first place Hight knows getting back on top won’t happen in one day but two events might be enough.

“We can’t jump four drivers at one time. Our goal is to be consistent and make moves to get around drivers one at a time. With qualifying bonus points and round wins you can make big moves in one race. We have to make our own luck and the way to do that is to be quick in qualifying and go rounds on Sunday,” said Hight. 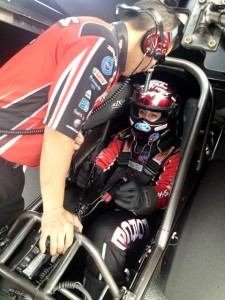 Currently sitting third in NHRA Mello Yello series points, Courtney Force is headed to Las Vegas for the14th annual NHRA Toyota Nationals, Oct. 30-Nov. 2 at The Strip at Las Vegas Motor Speedway to compete for the No. 1 spot in the Countdown to the Championship. With just two races left, the NHRA star sits just 72 points out of the lead.

The 26-year-old driver has a great record at The Strip at LVMS. She has never qualified lower than No. 6, qualified in the No. 2 spot resulting in two runner-up finishes in 2013, and started from the pole position last time she was at the track earlier this season. 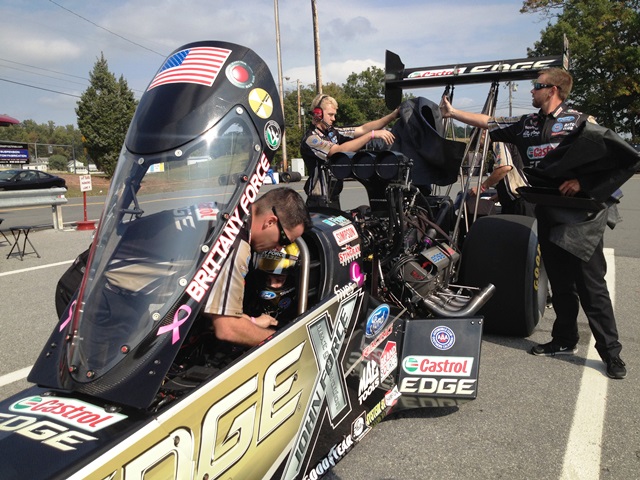 The 2014 NHRA schedule was very grueling and intense, but after a long, three week break in the race action, Brittany Force is charged up and ready to don her driving suit, gloves, boots and helmet and get strapped into her 10,000 horsepower Castrol EDGE Dragster. Brittany and her crew are ready to hit The Strip at Las Vegas Motor Speedway during this weekend’s 14th annual NHRA Toyota Nationals. The 2013 NHRA Auto Club Rookie of the Year had struggled a few time this season but her fourth final round appearance at the NHRA Nationals in Reading, Pennsylvania earlier this month once again showed the fans and the racing community that the sophomore Top Fuel driver shouldn’t taking lightly. With only two races remaining and this season, Brittany is still in the hunt for her first Top Fuel win for Castrol EDGE and John Force Racing.

“There’s only two more races left in the Countdown and we are going to head to Vegas with the goal of winning. My guys are pumped and itching to get back to the track. They’ve done a great job and we’re getting better. After our runner up finish in Reading, we wish there wasn’t such a long break between races. We have the right momentum now,” said Brittany Force

As the 2014 NHRA Mello Yello season races to the finish line, it has been one of positive change for the Castrol EDGE team, as Brittany has been in the finals four times and has raced from the top half field on Sunday 12 times, three of those from the No.1 spot. Led by seasoned tuners Todd Smith and Dean “Guido” Antonelli, Brittany knows she has the best crew in the pits. She also knows she’s a capable driver who will give the opponents she faces this weekend a run for their money.