Though John Force’s racing career is far from over, his incredible record and skill have led the California Sports Hall of Fame to schedule his induction for later this year. He will be the first person in motorsports to join the Hall of Fame.

“It’s an honor to be the first to represent not only my sanctioning body, NHRA, but to be the first of any driver in motorsports to be inducted into the California Sports Hall of Fame,” Force said. “Being a California native, growing up in the L.A. basin, this is truly an honor.”

Force was born in Huntington Park, Calif. and now lives in Yorba Linda. He holds multiple NHRA Mello Yello Drag Racing Series records, including most championships (16), most victories (148) and most No. 1 qualifiers (155). The 67-year-old raised those numbers last month with a win in the NHRA Gatornationals from the No. 1 spot at Gainesville Raceway. He will be inducted into the Hall during a ceremony June 25 at Morongo Casino, Resort & Spa in Cabazon, Calif. He will be racing at Summit Motorsports Park that day, and will deliver a videotaped message at the ceremony.

“I’ve worked hard to get to where I am today, and my family is following,” Force said. “To be chosen as the first motorsports representative, to take our sport of NHRA drag racing into the Hall, I feel it’s an opportunity to represent all the professional racers, from Top Fuel to Funny Car to Pro Stock to Pro Stock Motorcycle to all the grassroots racers – and to kids up-and-coming in a Junior Dragster, like my granddaughter Autumn (Hight), who someday might be in the California Sports Hall of Fame. I was the first, and this is a true honor.” 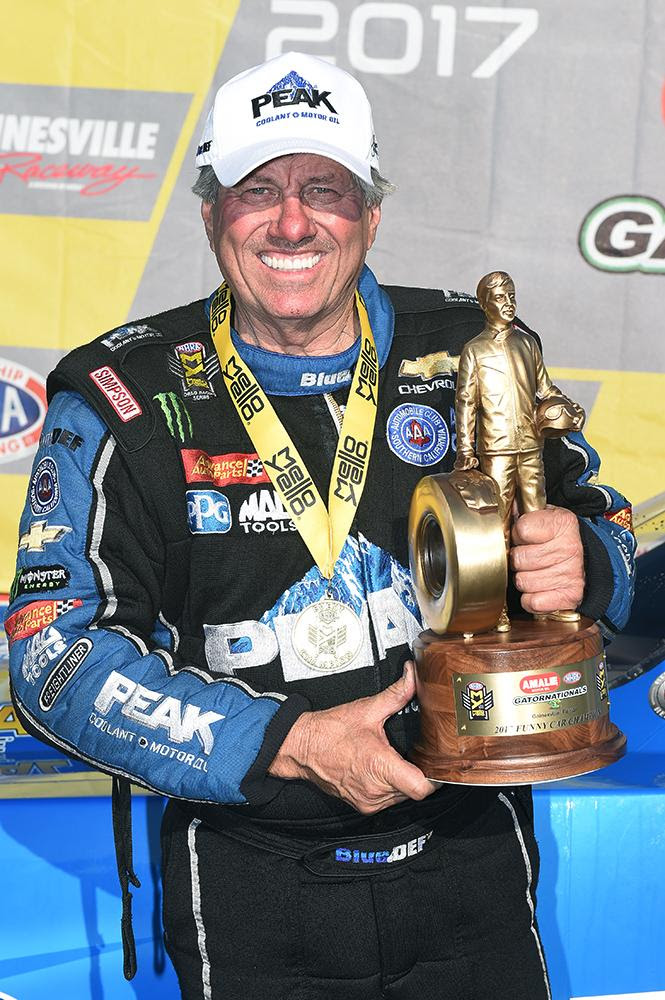 Force began his racing career in 1974 and scored his first NHRA Funny Car victory in ’87. Three years later, he won his first championship, kick-starting his driving career. He won 10 consecutive championships from 1993-2002 and then continued to impress, winning in all but one season since 1987. His daughters (with wide Laurie Force), Brittany Force and Courtney Force, currently drive for the team, John Force Racing. His daughter Ashley is a past driver and current vice president. Another daughter, Adria, is the team’s Chief Financial Officer.

“I’ve got to say thanks to PEAK, Chevrolet, Auto Club of Southern California, Monster Energy, Advance Auto Parts, Mac Tools,” Force said. “Without them, we couldn’t do what we love to do.”