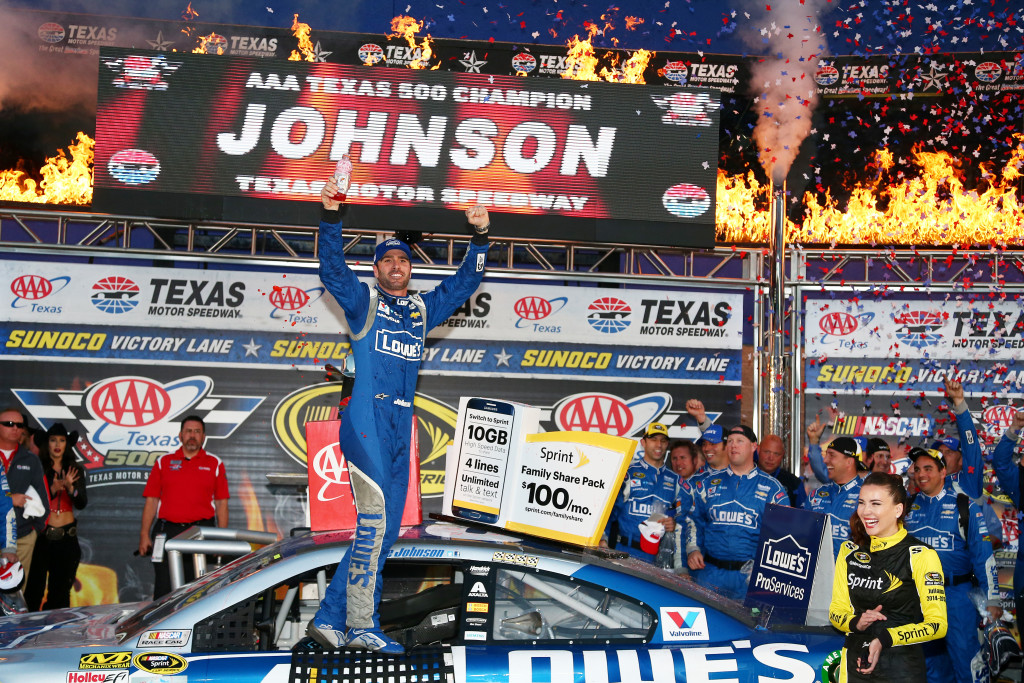 It looked from all accounts that Brad Keselowski was sailing securely to his first Texas win, but with three laps to go, victory was snatched away by Jimmie Johnson, who went on to win his fourth consecutive AAA Texas 500 and sixth overall at Texas Motor Speedway, playing the spoiler role in the NASCAR Sprint Cup Championship Chase.

Johnson, now with 75 Sprint Cup wins and only one behind Dale Earnhardt, began his charge with 18 laps to go on the final restart, staying close behind Keselowski.   The No. 2 Penske driver led for 312 of the 334 laps while Johnson was biding his time in the final circuits, waiting for the right moment to make his pass and did with three laps to go, accelerating past Keselowski down the backstretch, reversing his hopes of getting into the Chase Championship Round by 1.083 seconds.

“I just kept pressure on him,” said Johnson, who was eliminated in the opening round of the Chase ending on Sunday a 20-race winless drought.  “I could see that he was really tight, and that was the first I had seen him that vulnerable all day.  I just kept the pressure on him, kept searching for a line.  He saw me coming on the top and protected it. 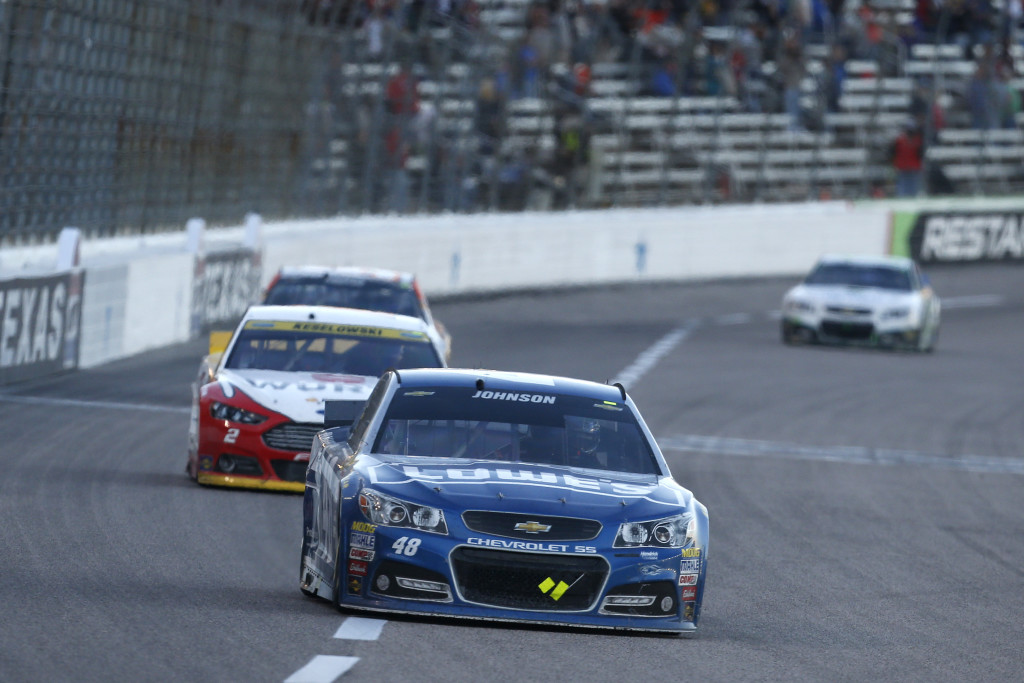 “I just kept trying to put pressure on him, hoping for a mistake.  He got real loose off of Turn 2, and I had a big run down the backstretch and drove it in really far into Turn 3 hoping to hear ‘Clear’ [from his spotter].  Once I did, I knew I was home free.”

Keselowski held a two-second lead over Martin Truex Jr. when NASCAR called a debris caution with 24 laps left.  On the restart, Keselowski and Truex rubbed fenders briefly going into turn one with no obvious damage to either as a result with Johnson in hot pursuit.

“The 48 [Johnson] car had mega turn [through the corners] that last run, and I couldn’t keep the turn, and it kept pushing real badly,” Keselowski said.  “I did everything I could to hold him off, but he was way faster that last run.

“Their team did a hell of a job and found speed, and my team did a hell of a job, too.  We led 300-some laps, these debris yellows always favor someone, and it wasn’t our day for them to favor us.  I’m still very proud of our effort today.  We’ll have a great shot at winning next week.  We really needed to win this one, and I know I gave it my all.” 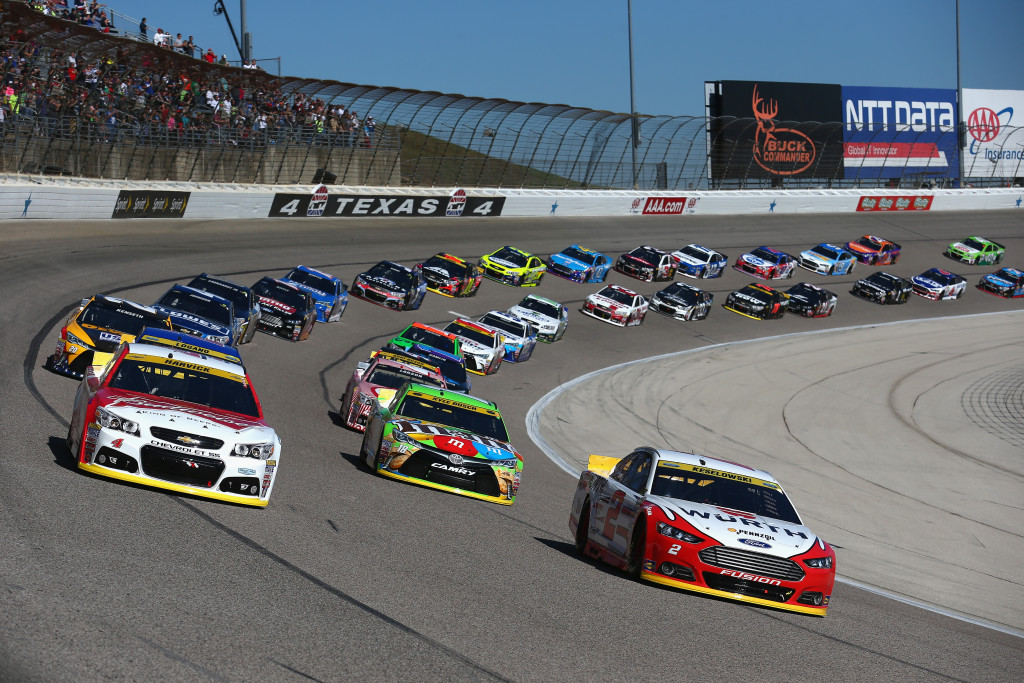 Tire problems plagued the AAA Texas 500 with an array of delaminating issues that started early taking notables like Joey Logano out of the race, shredding his left rear on lap 12 and leaving him in 40th in the final rundown.  Then tire problems struck down Kevin Harvick’s efforts twice but he remained in the hunt.  Harvick, having additional gearshift problems, had to hold his Budweiser Chevy in fourth gear the final 100 laps, driving mostly with his left arm to prevent it from popping out of gear.  Harvick goes into Phoenix winning there seven times including the last four straight and appears to have the inside line at the one-mile oval.

The top five of the AAA Texas 500 were Johnson, Keselowski, Harvick, despite his setbacks, followed by Kyle Busch and Carl Edwards. 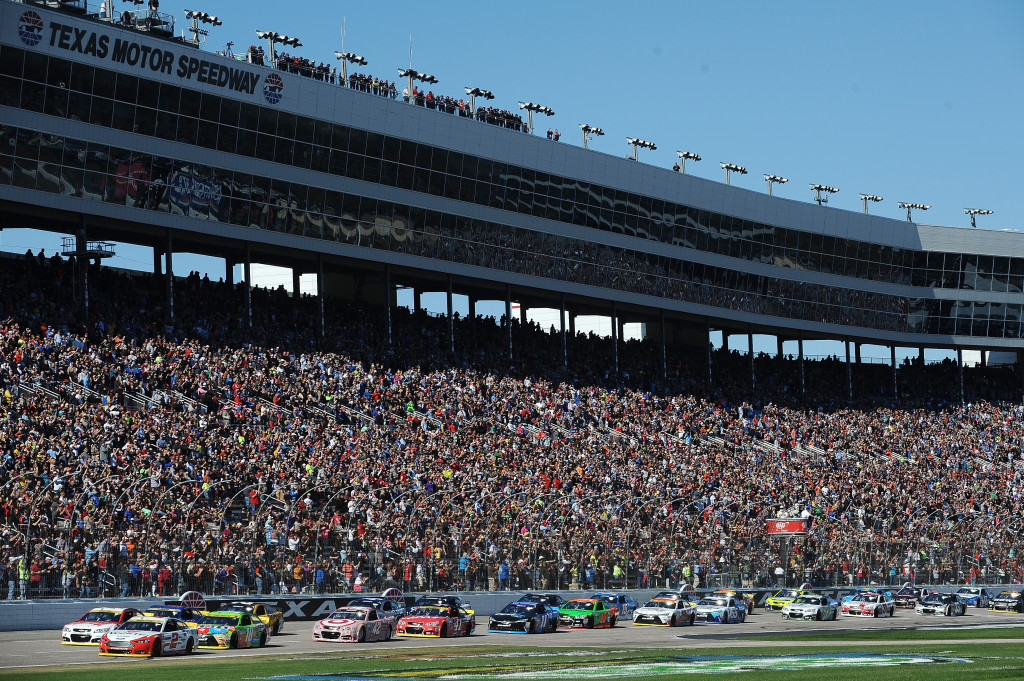 Now with only one race left in the Eliminator Round at Phoenix, only Jeff Gordon has a clear ride to Homestead.  Kyle Busch is + 11; Kevin Harvick + 10; and Martin Truex, Jr. + 7 as the top 4.  The last four begins with Carl Edwards – 7; Brad Keselowski – 19; Kurt Busch – 28; and Joey Logano – 63.  As per the Chase rules, it’s a win and you’re in at Phoenix to advance to the Championship Round.

Jeff Gordon, in his final Texas Motor Speedway race, finished ninth, but had a big surprise in Friday’s press conference when track president, Eddie Gossage presented the retiring Gordon with two Shetland ponies for his two children.  Gordon was stunned to say the least. 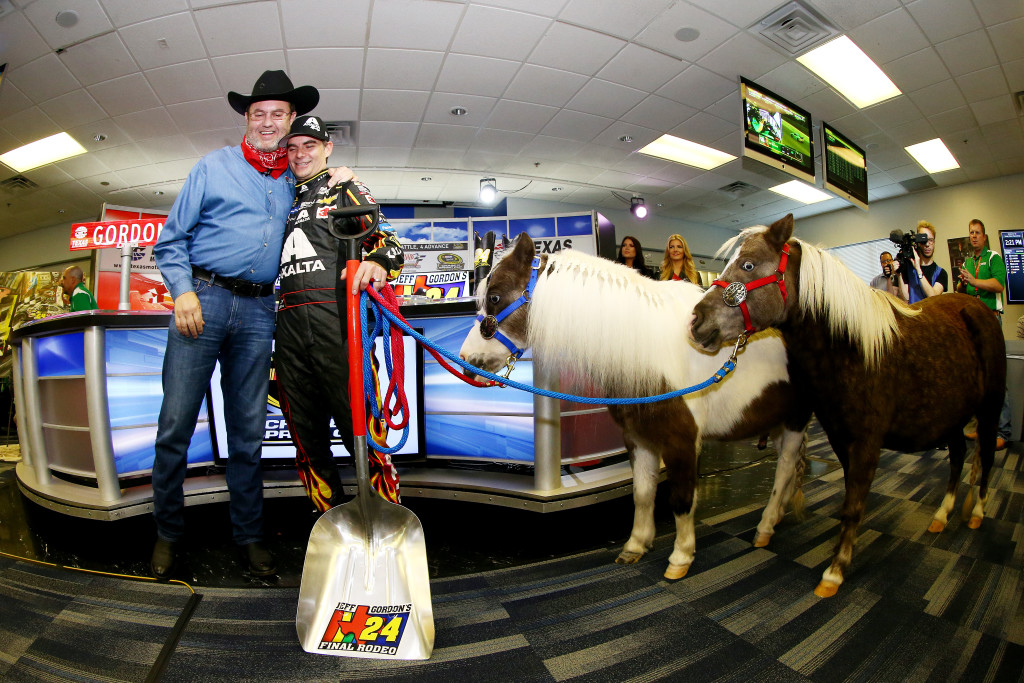 Replied Gossage: “Yes I do.”

“You have lost it,” said Gordon, who also received custom cowboy boots and a TMS street sign.  “Eddie you are unbelievable. …I am mad at you but at the same time I’m overwhelmed because my kids [Ella and Leo] are going to flip out.”

The average speed of the AAA Texas 500 was 139.490 miles per hour after being slowed by nine caution flags for 49 laps.  There were 15 lead changes among eight drivers.

It’s the Quicken Loans Race for Heroes 500K at the Phoenix International Raceway as the next NASCAR Sprint Cup race on Sunday, November 15, starting at 2:00 p.m. EST on NBC.