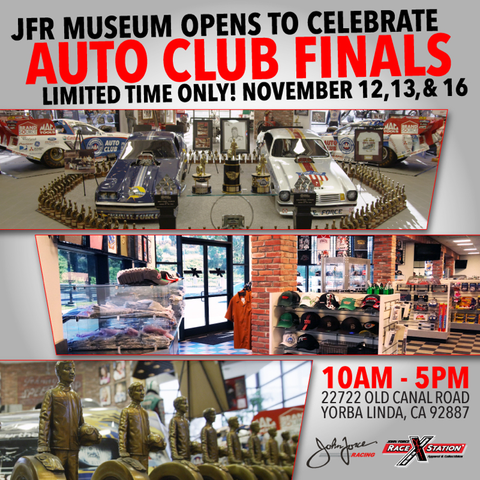 Fans will be able to browse through the museum and see some of JFR’s most historic race vehicles including John Force’s early days Brute Force Chevrolet Funny Cars, the Coca-Cola Corvette Funny Car, Force’s 1996 Driver of the Year Funny Car as well as his 15-time Champion Funny Car and the Elvis Funny Car. Robert Hight’s Los Angeles Dodgers Funny Car and Courtney Force’s pick Traxxas Funny Car along with hundreds of Wally’s and race memorabilia will also be on display for fans to gander.
John Force Racing recently moved the RaceStation store inside the JFR museum and shop and this will be the first chance for fans to see the newly remodeled store located at 22722 Old Canal Road in Yorba Linda, California.