Funny Car champion John Force shares some early memories of Jeff Gordon.  John Force’s memories of Jeff Gordon go back to the early 1990s when the two drivers were just getting started on their impressive championship runs. As Jeff Gordon wraps up a legendary career at the end of this season Force wanted to say thank you to Gordon in a way that only the 16-time NHRA Funny Car champion could with a fully flamed Chevrolet Camaro SS Funny Car. Force will run the Funny Car for one race, the NHRA Carolina Nationals starting on September 18th. 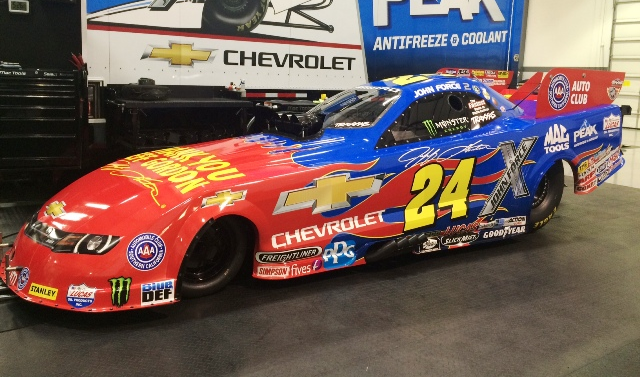 “I got the idea for the flames from Jeff telling me years ago he was a fan because I was always on fire. He was right, when I got started we were on fire from here to Australia. I always enjoyed seeing Jeff at races and award banquets. The guy was just so polite and professional but you knew he had the eye of the tiger too. You don’t win all those championships on your good looks. This special Funny Car is just a way for me, my family, my team, my sponsors, NHRA and the fans to say thank you for being a great champion and being such a great driver in NASCAR. I put as many flames as my designer Brandon (Baker) could fit on my hot rod in Jeff’s honor,” said Force, who will unveil the Funny Car on Friday at the NHRA Carolina Nationals.

“I loved being around the NASCAR guys. Dale Earnhardt Sr. was my hero and I learned a lot from him. Getting to know Gordon over the years has been a lot of fun. We see each other at NASCAR races and I know his kids love coming to the drag races at zMax Dragway in Charlotte. He is just a great guy and I am proud to run this Chevrolet Camaro to thank him for everything he has done for motorsports,” said Force.
Force as well as the rest of the JFR team will take to the track on Friday evening at zMax Dragway for the NHRA Carolina Nationals at 4 and 6 p.m. for the first day of qualifying.

Charlotte Motor Speedway will also honor number 24’s fans. In preparation for Jeff Gordon’s final race at CMS, the track will offer a Bank of America 500 ticket package for Gordon’s fans. The package will include a race program designed by artist Sam Bass, a Jeff’s Last Ride T-shirt, hat, lanyard, poster and commemorative credential. Charlotte Motor Speedway even surprised some fans with packages.