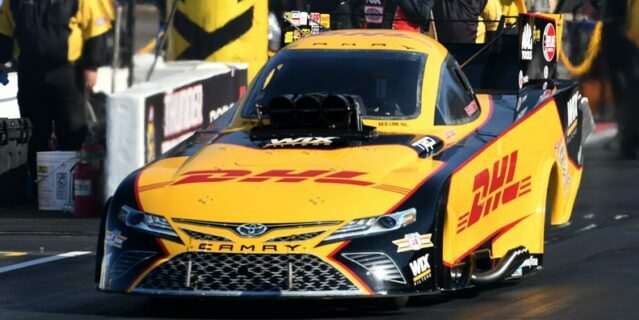 This weekend during the 65th annual Chevrolet Performance U.S. Nationals on the Lucas Oil Raceway dragstrip, 2018 NHRA Funny Car champion J.R. Todd has destiny to guide him in a quest to win a third consecutive Wally winner’s trophy on Labor Day Monday.

Todd, driving Kalitta Motorsports’ DHL-supported Toyota Camry currently stands eighth in the points tally, about the same as last year after Brainerd, when he was tied for sixth with Tommy Johnson Jr of Don Schumacher Racing. At the 64th U.S. Nationals, he won his second consecutive Indy race, beating Matt Hagan, thereby moving up to fifth place as the six-race Countdown to the Championship playoffs began two weeks later in Reading, Penn. 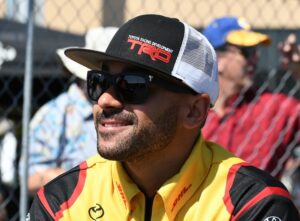 For a guy who grew up watching drag racing’s biggest competition of the year, becoming the only Funny Car racer to win three straight U.S. Nationals provides extra impetus coming into this long and eventful weekend. “To go there and try go win for the third time in a row, that would be pretty cool, there’s no doubt about that,” Todd said.

Looking to add to his 18 overall wins, he reminisced about his past at the historic track. “Going there as a kid, watching guys like (John) Force and (Ron) Capps, and now racing against them, it’s a surreal feeling. I never expected to win this event in Funny Car and to do it back-to-back is pretty awesome,” he said. “To try to do it three times and be the only one in the class ever to do [it] would be something. But I’m not going to try to put a bunch of pressure on myself.”

J.R. Todd is known for keeping his cool, but he knows that a strong showing at Lucas Oil Raceway outside Indianapolis would help him move up the Funny Car ladder – just as he did last year. He could use a little good fortune at the Christmas Tree and the timing stripe: Todd has a single victory and three final-round appearances in 2019, but he’s also been in a summer swoon since May, winning only five rounds since Memorial Day. 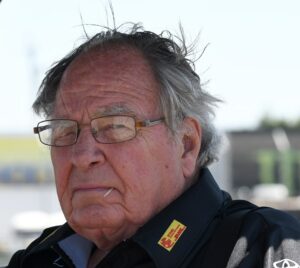 The Kalitta squad had a solid test session in Brainerd, which Todd is hoping will propel the team, led by crew chief Jon Oberhofer and co-crew chief Todd Smith. “It would be a perfect time to dig out of this slump,” he acknowledged. “We’ve got good notes for this race and it definitely gives me confidence going into Indy.

“We were kind of in this position last summer, where we struggled and got our act together at the right time, and I know I’ve got a successful and great group of guys behind me. We had a good test session in Brainerd and we have to make that night run count (on Friday). It becomes a grind after that.”

It’s always a challenge to wear the No. 1 on the side of your race car and this year has been no different for J.R. Todd and his Kalitta team. He has, despite the slump, been able to block out those distractions, and he’s looking forward to the magic of Indy. On Friday evening, before his first run – of five qualifying attempts for this race – J.R. Todd will reveal a special wrap for the Big Go race meeting.