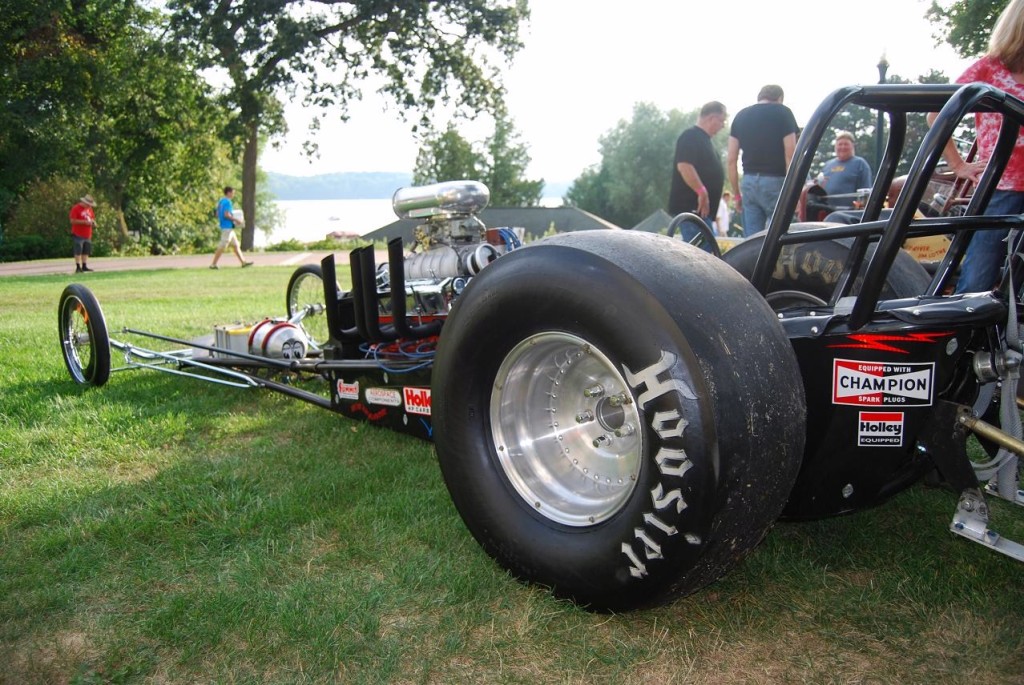 “It shouldn’t be hanging on a wall!” said Dale Milanowski of Milwaukee, Wis. He was talking about a front engine dragster that an Illinois car collector was storing on a balcony. Milanowski had his own front engine dragster on display at “The Gathering on the Green”—a concours-style car show that’s part of the Elkhart Lake Vintage Festival held each fall. Milanowski said it was rare for him to put the 1962 Chevy powered dragster in a show.

“This is the first show I’ve ever taken it to,” said the drag racing buff. “I’ve always just taken it out to the track before this, but my fiancée knows one of the head people here and he wanted us to bring it, so I said sure.” Milanowski has restored the car to mostly original condition, although the built Chevy 350 V-8 is newer than 1962 and he needed to make certain upgrades to be able to run the car today. It sounds like more work may be done in the future, too. “Right now it runs in the low 10s and should be doing better, so I gotta tweak it,” he said.

Milanowski said the project started when a high school drag racing buddy ran across a  front engine dragster for sale. “We checked it out and he bought it and we raced it for several years,” he said. “Then, he found this frame with the rear end and some of the front end parts and bought it. So when I decided I wanted to have my own front engine dragster, he offered it to me and I bought it.”

Milanowski doesn’t know who made the frame. He had to find the engine and he knows that Chevrolet didn’t make 350s in 1962. The engine looks good and works good. He also found a radiator, did the gearing in the Pontiac/Olds rear axle and found a two-speed Powerglide transmission for it. “The light one-not the old cast iron one,” he emphasized. The front end was all rusted from just sitting, so Milanowski had to take it all apart and have it all rechromed.

“It took awhile to find the front and rear rims,” Milanowski admitted. “I found them in Indianapolis at the swap meet at the Hot Rod Nationals. The tires I got right to of the Summit Racing and JEGs catalogs. But, most of the stuff came from swap meets and I had to make a few parts or have them made.”

The Burnout asked Milanowski if he has to meet all the modern safety regulations when he runs the car in nostalgia drags at strips today. “Oh yes, definitely,” he answered. “I had to have the frame re-braced with what they call kidney bars that sit off to the side and I had to rebuild the cage so it was safer.” Milanowski did not keep track of the costs involved in restoring the car and upgrading it to race today. “To tell you the truth, I just wanted to do it and I did it and I didn’t want to even think about what it cost me; I just knew it was worth it.”

Milanowski used to belong to a club called The Nostalgia Boys from Illinois. “They had about eight of these cars, but they got kind of broken up over the years and I’ve gotten away from them,” he explained. “We used to go around to different tracks in the Midwest with the club and we’d run on weekends.”

He says that when he hauls his car to a drag strip and takes it out of the trailer, there’s always a crowd of people around it. “They gotta come see it, because it brings back memories,” Milanowski point out. “They all lived through the front engine dragster era and now there’s not that many of them around.”

As for his own interest, Milanowski admits he loves the old front engine dragsters, too. “I think they were the neatest ones that were ever built,” he said. “When Don Garlits started putting the engine behind the driver, it was a whole different ballgame. I still like the ‘old school’ style with the engine it front.”