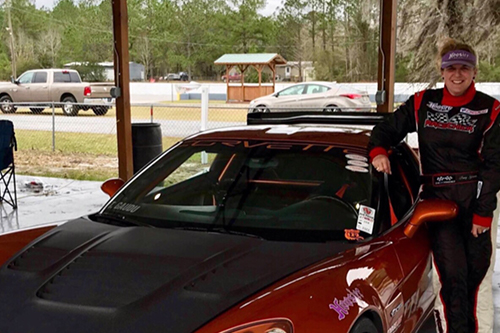 The InTech Max the Tach IV contest is a tremendous opportunity for an amateur racer, and after several rounds of video submissions and voting, three diverse finalists have been chosen among hundreds of hopeful racers who were asked to explain exactly how a race trailer would help them advance their racing career and in turn, how they would be able to represent inTech at various events. Voting is now open to determine the ultimate winner,  who will receive a 24-foot trailer from inTech, while the runners-up receive various prizes from the additional sponsors such as Optima, Summit, QA1, Forgeline Wheels, Champion Oil, Adams Polishes, Scosche and the USMA. The results will be announced at the Performance Racing Industry show in Indianapolis on December 13 at 2 p.m. in the inTech booth.

Tracy Gaudu knew she loved the Corvette long before she knew she loved racing, but the NASA time trials competitor quickly discovered that the two things went hand in glove when she purchased her first Corvette. Tracy spoke to RacingJunk about the challenges of balancing life as a Physician’s Assistant and a racer, and how she’s working hard to follow her passion for both.  The 24-foot enclosed trailer would go along way towards easing some of the burden of being a one-woman race shop, for starters.

RacingJunk: How did you get started racing?

Gaudu: I did not grow up around racing or motorsports but I have had a true love for Corvette since a very young age. I enlisted in the United States Air Force after high school but didn’t own my first Corvette until age 37 when I bought a 2005 C6 precision red automatic transmission car. After buying this car, I quickly joined the Longhorn Corvette Club in Austin, Texas, and subsequently became a member of the National Council of Corvette Clubs (NCCC) and was introduced to low-speed autocross and absolutely loved the competition.

RacingJunk: Why the Corvette and why the NASA time trials series?

Gaudu: I saw my current car, a 2008 atomic orange C6ZO6 in a dealership showroom in late 2007. Although I didn’t know how to drive a manual transmission, I thought I could indeed learn and win BIG. I did win the NCCC National Championship as well as the Southwest Region Championship which was difficult to do both within the same year. This was a huge year of learning – not only to learn to drive/race/win events in a car VERY new to me but to also learn how to load a car onto an open rollback type of trailer, trailer it to events all over the country, and change out race tires on the car. I did this alone then and continue to be a race team of one person now. I enjoyed the few high-speed auto crosses NCCC put on and won overall fastest time of day regularly and have class track records at multiple tracks.

I finally won Overall Top Competitor at NCCC Convention in Topeka in 2012 and had overall fastest time of day (men/women) for the high-speed autocross at NCCC National Convention at Raceway Park of the Midlands in Omaha in 2015. I continued to enjoy high-speed events and to get more seat time I attended at least 10 HPDE’s per year over the past several years all while adding performance parts to the car to make it more competitive. I needed to get back into competition (and less in HPDEs) so I decided to join NASA and got my TT (time trial) license late last year. Over the winter of 2017, I added a new motor to help make the car more competitive in TT1 and purchased a Lingenfelter LS7 650HP motor. I also caged the car a year ago to make it safer. This being my rookie year, I have been running hard to win the NASA Southeast TT1 championship and hope to accomplish this in a couple weeks at the year’s end event at Road Atlanta.

RacingJunk: How do you balance your work life and racing as a Physician’s Assistant?

Gaudu: I work a very full time job as a surgical physician assistant in vascular surgery and part time in trauma. When I am not at the track I am working. I try to work as many extra weekends as possible to afford this all. I have no financial help with my racing. I have sacrificed quite a bit personally for this sport but I absolutely love it and I feel it is what I should be doing. I have no regrets regarding this.

RacingJunk: What is your favorite thing about racing?

Gaudu: I have found that the strength to become an exceptional driver is based on pure dedication to my sport, both physically and mentally. This is why I love racing. It is challenging, it is fast, it requires your absolute full attention and it is moving you forward all of the time, literally. Thank you RACING for helping me find my obsession – one that will last my lifetime.

RacingJunk: What is your next big race goal?

Gaudu: One of my goals is to compete and finish the Ultimate Track Car Challenge at Hyperfest without car issues which have plagued me the past two years. I also want to compete at NASA National Championships in Utah in 2020. I am seriously considering getting my competition license through NASA as well in 2020 and those are my main goals that I am striving to achieve.

An enclosed trailer would be life changing. I travel alone and have had some negative and scary things that have happened to me while on the road. My car needs more security as well as my equipment and myself when I am on the road. I need to get my car and my equipment out of the eyesight of others thus creating more security. Weather is another negative to an open car hauler especially when my race car is caged and I have removed the windows. There is plexiglass in the window areas but again it doesn’t keep all the rain out and could make the car a target for break-ins especially when I am stopped for the night at hotels.

To see video of the finalists and vote for your favorite, go the the Max the Tach IV website.