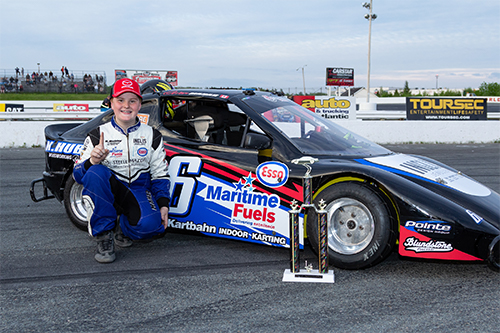 The InTech Max the Tach IV contest is a tremendous opportunity for an amateur racer, and after several rounds of video submissions and voting, three diverse finalists have been chosen among hundreds of hopeful racers who were asked to explain exactly how a race trailer would help them advance their racing career and in turn, how they would be able to represent inTech at various events. Voting is now open to determine the ultimate winner,  who will receive a 24-foot trailer from inTech, while the runners-up receive various prizes from the additional sponsors such as Optima, Summit, QA1, Forgeline Wheels, Champion Oil, Adams Polishes, Scosche and the USMA. The results will be announced at the Performance Racing Industry show in Indianapolis on December 13 at 2 p.m. in the inTech booth.

Owen Mahar is young, but hardly a novice racer.  The 8th-grade kart and bandalero driver is poised on the track and off. He knows what he wants to accomplish and what he needs to do to achieve his goals, so don’t let his age or that big grin fool you.

His enthusiasm for racing is part of a family legacy, and he’s been acting on it since he got his first kart at 4. RacingJunk reached out to Owen, and dad Daryl, to learn more about his goals and what an InTech Trailer could do for his next step.

RacingJunk: How did you get started racing?

Mahar: As a little kid, I’d go to the track every week and watch my dad race his car.  I got to see other kids racing in the support classes which really inspired me to want to become a driver.

We spent every weekend at a track, camping with other racers and the fans as a family with my grandparents and it’s what I grew up wanting to do.

I got my first dirt go kart when I was 4 and I spent every minute drifting it around our yard and trying to make it slide. Once I was 6 we got a Bandolero and started practicing with it until I was old enough to race at 8.

RacingJunk: You’ve raced Karts, Bandoleros, and Legends cars. Do you have a favorite? If not, what do you enjoy about each?

Mahar: The Karts are fun because you are so close to the ground it feels so fast, almost like your flying. The competition is so tight because the karts have under 10hp, you have to be so perfect with the wheel and there is no room for error. I remember my first real lesson: We were at a national event with 200+ karts in Ontario and I got bumped and dropped a wheel in a corner, the next straight 8 or 10 karts drafted past me. It’s not something you forget.

The Bandos are fun because there is some amazingly close competition every week. They are a spec car and I’ve been able to run at tracks all the way from Nova Scotia to Texas and lots of tracks in between. What I enjoy most about them is that they have a little more power, it’s on a circle track so if you drop a wheel or get a bump usually still have time to come back and fight for a win. Since they are a spec car, I get to travel a bunch and run them at different tracks. The biggest for me was trip we made last year to race at Texas Motor Speedway as part of the NASCAR weekend. It was pretty cool. While we were racing on the little track you could hear the cup cars running around the big track.

RacingJunk: What’s the next step for you, race series wise?

Mahar: The next step is the Legend series. I practiced my car all this summer and got to start one race this fall after the Bandolero racing was over. I’m only 13 years old, so I’m going to slowly transition into the Legend car over the next year. I already know I’m going to love it, the car has so much power and similar to the Bandolero racing it’s a spec car. The Legends have around 150hp. They race them at 6/7 tracks within four hours of my home so there is tons of racing I can do. Plus, hopefully, I’ll get to travel some like we did with the Bandolero.

RacingJunk: How do you combine racing and school/other activities? Do you go to school and do you have other hobbies/interests?

Mahar: I’m in Grade 8 at Five Bridges Jr. High School. Because most of the bigger away trips happen in the summer or when I’m out of school, I’m fortunate to be able to do it all. I’m not allowed to skip school very often for races. However, I’m lucky my teachers support it and they will give me work to do if I miss a few days.

This year, for example, was crazy.

I raced almost every Friday night at our local circle track with the Bandolero. My grandparents would pick me up with the truck and trailer when the school bell rang and we would head to the track where my parents would meet us. When the racing was over, we’d jump in our RV and head to another circle track about three hours away to race on Saturday and then to a Go Kart track to compete on Sundays. Then back in the RV Sunday night and home for school on Monday.

For sure my biggest hobby is racing and I’m always in the garage building stuff and working on the cars. This summer I learned to weld and got my own welder so I’ve been making stuff in the garage with that which has become a new hobby.

When I’m not racing, I like to mountain bike and ride my dirt bike.

In the winter I play competitive hockey for an organization called TASA minor hockey here in Nova Scotia.

RacingJunk: What’s your ultimate race goal in the future?

Mahar: To become a NASCAR driver or have the chance to drive a NASCAR is my ultimate race goal. The NASCAR Pinty series comes to our local track, riverside international speedway, it’s pretty awesome to see those drivers and cars.

To see video of the finalists and vote for your favorite, go the the Max the Tach IV website.